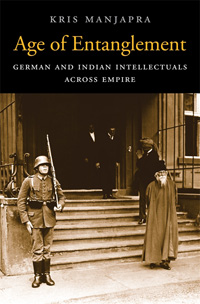 This is a book of lists, though a good set of lists; it contains a good many leads worth following in future research. In the hands of a more able historian, it might have been a viable monograph, or perhaps more than one viable monograph. As it stands, it suffers from being overambitious and timid at the same time, a book comprising a series of survey articles for which better writing is often already available, and from which the author extracts its specifically "German" and "Indian" material. My not being its first reviewer means that I don't have to be the one to point out the obvious - that this is a book whose grasp of details (what we once unselfconsciously called "facts") is often rather weak (and the book would be far more useful for future users should a list of its inaccuracies be compiled somewhere); that it does not acknowledge its debts to previously published work; and that it fails to understand (or refuses to elucidate) the significance of many of the larger themes it raises. There is also the more fundamental problem that "Germany" and "India" do not exist as entities with a continuity into their earlier, 19th century histories, unless one accepts the nationalist fallacy of a nation waiting to be born, a version of a Blut und Boden argument.

The book begins from a flimsy premise: that there was a parallelism between the role of German nationalism as a "prime force challenging the idea of Europe" and "Indian anticolonial nationalism" as a "prime force challenging the idea of Empire"; and that these two entities "used each other's intellectual institutions and each other's platforms of recognition to claim political distinction on a world stage" (1). Manjapra invokes "entanglement" as a concept; this is a feature of historiographical choices rather than an actor-centric perspective (what, exactly, is a "disentangled" history?), though perhaps it is unfair to blame the author alone for the use of a conceptual apparatus that was unsound to start with.

The first part of the book, mostly from secondary sources, is in the nature of a survey of Indo-German connections in broadly chronological order. "Germans" working for the British Empire (as "Germans and Austrians", anachronisms for the times described, and including Orientalists, explorers, scientists); Indians in the early years of the twentieth century travelling to or engaging with Germany; German uses of Asianate or Indic ideas in their self-understanding (including Nazi and pre-Nazi visions of Aryan Asia); and Indians in Germany (communists, conservatives, Nazi collaborators and Rabindranath Tagore) are briefly enumerated. Part Two of the book picks up particular themes for closer treatment: physics, economics, Marxism, geopolitics (under the patronage, mostly, of Karl Haushofer's Deutsche Akademie in Munich); psychoanalysis; and the world of artistic production, including the German contribution to early Indian cinema. "A new order", the last, very brief chapter, deals with the post-Second World War world, superficially touching on science, the Cold War, development, East and West Germany, Carl Schmitt, Pakistan and Bangladesh.

Manjapra describes all of these as "intellectual projects to rearrange and recatalogue the world", and claims that this was what "scientific universalism has always done" (275). Should this be the case, the choice of two specific states to map this universalism seems peculiar, especially as he makes claims elsewhere about "the post-Enlightenment" and the role of German and Indian intellectuals in breaking down "Anglocentric Europeanness" and seeking to break free from "the spectre of the British Empire as the harbinger of Enlightenment universalism" (7); but the "universalism" referred to was not just German and Indian, containing its fair share of Anglophone actors. In passing, we are also told that "[s]elfhood and otherness are knotted things" (292).

Those who do read the endnotes in parallel with the text will find citations to primary sources that are mostly generic rather than used to provide detail, perhaps as a fallout of trying to do too much in a single volume. Misleading endnotes abound; this raises questions about the reliability of the author's referencing practices. To provide just one example, in Chapter 4, footnotes 159-161 are used to cover the activities of both Tarak Nath Das and Benoy Kumar Sarkar; but the one file cited refers only to the latter. Each of the chapters contains material that has already been developed at greater length and with greater analytical rigour by earlier writing. A number of these earlier works are indeed listed in the bibliography; but they are cited, if at all, only in passing in the endnotes to the text, thereby enhancing the experience of newness for the non-specialist reader, and raising the suspicion of a slight dishonesty in matters of citation that unfortunately is increasingly common in current academic practice.

Age of Entanglement, with its self-consciously Hobsbawmian title, is rather frustrating, repetitive, and in large parts unoriginal for those who know the material (and the list of such persons is long and getting longer, going back to the 1970s). It is in some ways a rediscovery of what was once self-evident: that historical actors engage with ideas and events outside their national horizons. Its importance in the public domain will be as an attempted survey that provides clues to further research and a list of potential sources and archives to a new researcher on Indo-German connections. That we now choose to treat every border-crossing as special (and ideas are notoriously unable to observe national boundaries) is symptomatic of a reification of boundaries rather than a transcending of them. If the aim of the book was to become a necessary footnote for anyone who enters this field, it might well be successful, attempting as it does to cover large swathes of time and a wide range of themes. But the material, such as it is, is spread very thin. My personal difficulty is that Manjapra glosses over or ignores the undoubtedly Nazi links of several of his historical protagonists, as if that is incidental to the greater tale he chooses to tell; among other things, I have difficulties with the idea of a "Nazi academic internationalism" (153). Perhaps he is being ironic; but this book leaves a reader with a troubling sense of a celebration of a specifically German and Indian genius striving against the mediocrity of an Anglophone imperial capitalism.