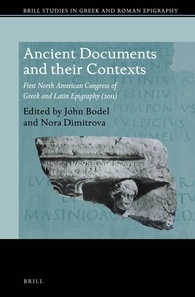 The editors have prefaced these seventeen essays with an interesting 'Introduction' that describes the history of the American Society of Greek and Latin Epigraphy, which was founded in 1995 and sponsored, in 2011, the conference at which these papers were presented. Seven papers are on Greek epigraphy, ten on Latin epigraphy. Three of the authors (in the interests of full disclosure) are former students of this reviewer, and I have met another seven: North American Epigraphy is not a large field.

The Greek section (chapters 1-7) begins with a study by S. Tracy of Athens during the Second Macedonian War (201/0-197/6), confirming that the lack of epigraphical production during those years is indeed a real phenomenon. This essay retains much of the warmth of the original oral presentation, and demonstrates, as well as absence of evidence can, that the Athenian political process (and the secretary cycle and even the Metonic cycle) was seriously disrupted during this "terrible" crisis (24). I. Bultrighini examines the coastal demes of Attica, exploring a difference between the west coast (where Nymphs, Pan, and Hermes were worshipped, on hilltops and in caves) and the east (where Artemis and other Olympians dominated the religious landscape, with cult spots closer to the demes). This difference is perhaps the consequence of the existence of "very ancient and significant places of worship" on the east coast but not on the west (48), although such a conclusion is perilously close to merely restating the evidence. S. Bolmarcich studies IG I3 11(Athens' "treaty" with Egesta), noting that its role as Exhibit A in arguments about dating by three-barred sigma has driven into the background serious study of what this document actually was, and what it might have meant historically: she argues that it memorializes "a preliminary stage of negotiations" - that it is not a formal treaty - and that it shows a "surprising degree of planning for the Sicilian Expedition" (65). A. Williams argues that a woman named Xenokrateia (IG I3 987) could dedicate land to Cephisus and other gods as a form of endowment, while keeping the land within her family; with an artist's eye P. Butz examines the "offset stoichedon" arrangement of the text of the new "Marathon" stele, fascinated by a text in which "the horizontals become verticals and the letterforms making up the names assemble, reassemble, disintegrate fall " (96); and J. Friend identifies the Lycurgic ephebic dedication IG II2 3105 + SEG XXXI 162 as arising from these ephebes' participation in the Nemesia at Rhamnous. G. Tsouvala argues that column 3 of IG IV 732 lists members of the gymnasion (previously Gymnasion had been taken as a personal name), including women; and that "Dionysia" at the head of column 2 refers to a festival of Dionysos, not a personal name. One does nevertheless wonder what kind of an inscription (its beginning is lost) this would have been.

W. Eck leads off the Roman papers by asking, "Documents on Bronze: a Phenomenon of the Roman West?" To which he answers "yes": the custom was Roman, and "Roman intervention did not produce a fundamental change in the epigraphic culture of the Greek East" (147). P. Keegan examines retrograde C. (used to signify the former female owner in the nomenclature of a freed slave) within Rome's masculinist discourse and concludes that the letter is a signifier "of socio-cultural complexity, ambiguity, and contestation within the traditional epigraphic landscape" of Roman Italy. But the complexity is that of the contexts where manumitted slaves and their former owners appear, the ambiguity seems to be that created by shared ownership (and non-specific female naming), and the contestation arises in only one example, where the author perceives tension between freed people and the free but illegitimate status of a child. To my mind this was the least successful paper, not least because the author does not note that (reversed) C can also signify "centurion", which creates some havoc for interpretation. B. Bitner offers an in-depth look at four praefecti fabrum at Corinth, concluding that the uncertainty that surrounds the significance and duties of this post elsewhere also characterizes the Corinthian examples. J. Nicols provides an overview of hospitium and the tesserae hospitales, in this case focusing on how hospitium "facilitated exchange and understanding on the Roman frontier" (191). C. Roncaglia traces networks of interconnections in Italy, especially in "Pliny country," noting the neighborly ties cultivated by local notables that contrasted with the region-to-Rome ties created by the Roman army; S. Tuck tracks demographic patterns in the Roman navy (recruitment zones seem to be "under-developed areas" of the empire; age at enlistment included very young and those over thirty; only 45% survived their term of service) and offers more data for the conclusion that, since age at end of service and calculated life expectancy (as excerpted in Dig. 35.2.68) coincided, perhaps the Romans constructed a system of retirement benefits that they knew they would rarely have to pay (228). N. Popov compares the epigraphic habits of the Legio XIV Gemina (in Mogontiacum, mostly) and the Legio XV Apollinaris (in Carnuntum), showing that they were, in small ways (e.g. the inclusion of "D.M."), different, and that when XIV moved to Carnuntum and co-habited with XV, XIV borrowed from the habits of XV. J. Liu offers a close reading of AE 1998, 282, a statue base (with its own honorific inscription and dating formula) inscribed with a dossier of five documents, revealing the tensions complicating euergetism when the benefactor was not local and was trying to become part of a local network. Servilius Diodorus wished his endowment for the dendrophori to be administered (unusually) by the city of Lanuvium, which was initially unresponsive to his request (and, indeed, did not honor him: the statue was put up by Diodorus' wife); so an important senator, Pontianus, had to write in support before the city would agree. D. Trout argues that the empress Constantina herself composed the dedicatory epigram for the Roman basilica dedicated to the martyr Agnes, and identifies in the poem several significant intertextual links, one to Priam's daughter Polyxena in the Aeneid, and one to Ovid's Perilla in the Tristia, evidence both of Constantina's erudition and of a more widespread desire to connect fourth-century Rome to earlier Romes. Finally, K. McMahon traces the Renaissance-and-after habit of constructing "epigraphic walls" of inscriptional fragments and other people's words, a tour that begins with Michelangelo and ends with outdoor billboards.

North American epigraphy may not be a big field, but as these papers show, the conferences it can sponsor prove its health. These epigraphists are mostly careful in their methods and ask interesting questions of the bodies of material they are studying. One looks forward to the next set of papers from the subsequent congress, which took place in January of this year.