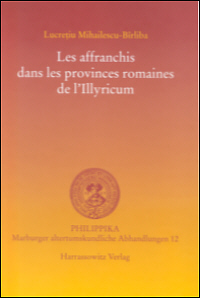 Lucretiu Mihailescu-Bîrliba has performed the helpful service of collecting, cataloguing, and analyzing all epigraphical references to freedmen in the Illyrian provinces of the early and high Roman Empire (Dalmatia, the two Moesias, the two Pannonias, and Dacia). This permits not only the assessment of freed roles, freed mobility, and freed euergetism in this area, but also the drawing of comparisons with other better-studied provinces, like Hispania and Belgica. The results are careful, cautious, limited, and not very surprising, but this work usefully puts the Illyrian provinces 'on the map' for future work in the social history and social structures of the region.

Part I consists of seven chapters and a conclusion. The first two survey scholarship in a judicial and useful way, and serve well as quick and no-nonsense summaries of the state of our knowledge at the moment. Chapter One (1-15) gives an overview of the scholarship on the freed, including their social mobility (9-13) and what can be known of them in the Illyrian provinces in particular (13-15). Chapter Two (16-33) again surveys what is known, this time about the manumission of slaves (16-19), the relations between freed and their former masters (20-22), marriage and family (23-25), the economic (and financial) roles of freedmen (25-28), and the social role of the freed, especially their appearance as Augustales, priests of the imperial cult (29-30). Chapter Three discusses the imperial organization of the Illyrian provinces and the roles of slaves and freedmen in it (35-41); Chapter Four (42-74) then matches as best it can the imperial slave and imperial freed found in the epigraphy of these provinces to the general arrangements laid out in Chapter Three, finding that the hierarchies (identified by G. Boulvert elsewhere) do not manifest themselves as forcefully in the Illyrian provinces (46-52). Thereafter, the chapter devotes some attention to the issue of social mobility, as manifested through the wealth apparent in stone monuments and euergetism, service as Augustales, and marriage/familial patterns (52-74). Chapter Five examines the non-imperial slave and freed populations across the matrix of the same issues (75-119), but with special attention given to the attestations of relationship between patrons and freedwomen (92-95) and indications of profession (100-102). In both chapters Four and Five Mihailescu-Bîrliba is interested in the question of whether the freed population (imperial or other) constitutes an example of paradigmatic social mobility (61-62; 110-112); for both, he says catégoriquement non, the imperial freed because they owe their rise in society to their patron the emperor, the latter because they rarely break free of the bonds and boundaries that hold them (albeit as free men) at the lower or middling levels of society. A short sixth chapter investigates the divinities honored by the familia Caesaris and by the other freed: Jupiter and Mithras are numerically the most prominent for both groups (120-124). Chapter Seven (125-132) tries to compare what is known about age at manumission in the Illyrian provinces to what is known about age at manumission elsewhere (the material is too spotty to provide a reliable answer, 126); and asks how many masters inherited from their freedpeople (unknown - although perhaps more could have been deduced from the fact that forty-four were responsible for erecting the funerary monument, a typical duty of the heir, 127-128). It also compares marriage-patterns (the Illyrian material confirms the long-identified trend that free women marry imperial slaves, but does not show that they marry imperial freedmen as frequently, although the data-base is very small (67-68: 43 total spouses known), while freedwomen here as elsewhere often marry their freeborn masters. Finally, it compares economic position (the very wealthy freedmen of Italy were truly exceptional) and social roles (most Augustales were, indeed, non-imperial freedmen). Chapter Eight, a short conclusion (133-137), emphasizes that the exiguousness of the evidence prevents strong endorsement of many generalizations, but finds most noteworthy the fact of social mobility and the different achievements, in terms of social respect, of imperial freedmen (who represent the emperor and work on his behalf after manumission) and the private freedmen (who do not). Otherwise, similarities are stressed: in Illyria, as elsewhere, it is the private rather than imperial freed who serve as Augustales (135); in Illyria, as elsewhere, the language of epitaphs is common and familiar (136); in Illyria, as elsewhere, the freed occupy a familial position defined by their relationship to the patron and marry other freed or (if freedwomen) their masters or (if imperial slaves) free women (136). Such generally discernable similarities allow Mihailescu-Bîrliba to conclude (correctly, I think) that the same social structure prevailed, generally speaking, across the Roman Empire.

There follows a brief Appendix (138-152) on the names of freedmen (dividing their cognomina into Latin, Greek, and Other), noting that although the division between Latin and Greek is approximately equal in most of the Illyrian provinces, in Pannonia Latin names outnumber Greek two-to-one, a disproportion Mihailescu-Bîrliba attributes to a higher degree of Romanization there. Finally, there is the extensive and impressive Part II, the catalogue of inscriptions mentioning imperial freed (153-209) and private freed (209-336), with a running numeration (from 1 to 711) across these two categories. Each entry gives the bibliographic references, a brief physical description of the stone (when available: this catalogue is not an epigraphic edition, and Mihailescu-Bîrliba does not appear to have examined the stones himself), the text of the inscription itself, a French translation, and a discussion of dating criteria, of relationships indicated on the stone, and of any other matters of interest. The sheer number of pages given over to the catalogue suggest where the lasting value of this volume may lie: in its usefulness as a work of reference, also facilitated by an index of names (337-344) although not, alas, an index of epigraphical sources.

Overall, Mihailescu-Bîrliba's work is thorough in its collection of evidence and its assessment of the existing scholarship, while the analyses are cautious and non-controversial. One could wish for more. Mihailescu-Bîrliba suggests, for example, that the Illyrian provinces may have had an imperial-freedmen group of officials less easily set in hierarchical relationship to each other because of the prominence of mining (and other economic activities) in the provinces - but Mihailescu-Bîrliba ventures no further into the adventurous world of explanation than that, not contemplating (for example) whether hierarchy in responsibilities and 'professions' was indeed not necessarily the best way to think about imperial officialdom of all sorts, even among freedmen. Yet could Mihailescu-Bîrliba have found more to question, more to think about? The evidence is simply too uninformative. And because there are apparently very few categories in which the social roles and activities, the family connections, the markers of social prestige, and the economic pursuits of the freed in Illyria look markedly different from elsewhere in the Roman Empire, he simply cannot get any traction on any interesting historical issues. So what you see is what there is; and that is what Mihailescu-Bîrliba has given us.