Mark Pittaway: From the Vanguard to the Margins: Workers in Hungary, 1939 to the Present 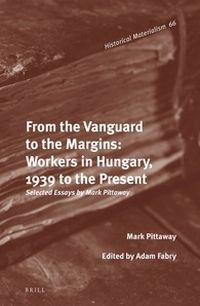 Mark Pittaway had a very rare talent. Studying a seemingly peripheral detail based on the mostly untouched obscure archival materials found in a remote place, he was able to grasp the everyday workings of power and the limits of an entire political system. This ability rested on a sovereign mastery of social theories, an extraordinary instinct for historical reality, and a profound knowledge of the research and historiographical debates in his field.

The other great skill Pittaway possessed was his rigorous scholarship. Although he confessed a clear leftist leaning due to his family background, inspired by socialist ideas during the harsh reign of Margaret Thatcher, his political views never spoiled his scholarship. The fact that this volume was published in the series Historical Materialism should therefore not lead to the premature conclusion that Pittaway was writing for a limited circle of Marxist thinkers. On the contrary: Although he understood the needs and desires of the working classes he never idealized them and was always very critical of their shortcomings and flaws. In his writings about Hungarian workers in different time periods, he provided examples of working class involvement in right-wing radicalism, antisemitism, sexism or tendencies to exert 'revolutionary violence' against real or imagined 'enemies'.

This meticulously and beautifully edited collection of twelve essays by a brilliant historian combines a number of different topics, periods, and approaches. All chapters have been published before but this collection sets them in context and makes it possible to fully comprehend the wide range of Pittaway's scholarship.

Most of Pittaway's work focused on the industrial working class and the main contradiction of the Communist party in Hungary - the fact that it imposed a socialist system without paying attention to the needs, traditions, interests of what was supposed to be the central, ruling class. The conflicts which derived from this included the revolution of 1956. Yet some of these essays show other fascinating aspects of his work. Pittaway's final subject before he passed away in 2010 at the young age of 39 was the reconstruction of borderland societies between Western Hungary and the Burgenland beginning with the Anschluss of 1938, which created a new border between the Kingdom of Hungary and the new Greater German Reich, and ending with 1956, when the border between the Republic of Austria and the People's Republic of Hungary created a small temporary gap in the Iron Curtain for a few weeks, enabling the escape (and return) of thousands of Hungarians. Two other essays are dedicated to the problem of 'Crisis, War and Occupation' in Eastern Europe, analyzing the political, economic, and social situation at the end of World War II.

The first two chapters are taken from his excellent book Eastern Europe 1939-2000 [1] in which he analyzes the social history of the countries between Germany and Russia, the Baltics and the Balkans, from a long-term perspective including World War II, the German and Soviet occupations, the Communist and post-Communist periods in one critical narrative, embracing social, economic, political, and ethnic conflicts, and how these evolved in the context of continental, national and regional power struggles. In these two chapters, Pittaway manages to integrate discussions of the impact of war, Nazi and Communist policies on population movements, living standards, and the political structures of the region.

The next three chapters focus on political, social and gender conflicts in Stalinist Hungary, mostly regarding the working class, which had trouble finding itself in a system which celebrated workers as representatives of the new 'ruling class' without fully trusting them. Chapter Six analyzes the 'disintegration and reconstruction' of socialism shortly before, during, and after the uprising of 1956, in which workers played the decisive role. The last chapter of the book attempts a more systematic and comprehensive approach 'towards the social history of the 1956 Revolution in Hungary', including other social groups. Chapter Seven offers a fresh look at the relationship between economic reforms, social relations, and the politics of the Communist party under János Kádár in the late 1950s and early 1960s. The last four chapters are dedicated to different topics: One is a very insightful discussion of the value of local and regional archives for the study of Hungarian postwar history (Chapter 8), and another (Chapter 10) looks at the deep and traumatic fall of the workers during the transition to capitalism, a troublesome history that helps to explain the radical political changes after 1989, in which workers would first vote for the Socialists and later for Jobbik. Chapter 11 is a lucid social-historical analysis of the career of Fascism in Hungary, from the end of World War I until the post-communist period.

From the Vanguard to the Margins is a wonderful book, extremely well and carefully edited and introduced by Adam Fabry. The epilogue was written by Pittaway's former mentor Nigel Swain, who closely observed the career of his former student. This short text also introduces the reader to Pittaway's fascinating intellectual biography. We should be grateful for this carefully edited collection, showing how much we have lost, and how much more we could have hoped for from this great mind.