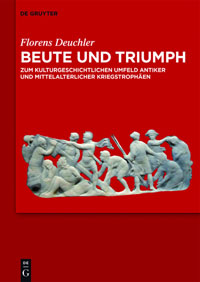 The capacity to steal other people's goods - as well as the people themselves - has been until relatively recently a major draw for men to participate in warfare. Since opportunities for upward social and economic mobility were severely limited in ancient and medieval societies, armies of farmers and the poor could enrich themselves enormously on campaign, as could their already well-off leaders. In this book, Florens Deuchler provides a survey of looting in warfare from Megiddo (ca. 1479 BCE) to the seventeenth century CE.

In the introduction he makes several notable observations. Acts usually reckoned to be crimes are normalized, even encouraged in war: rape, theft, arson, vandalism, and looting. He treats the snatching of women separately, before broadly categorizing war looting into three categories: the unauthorized snatching of an overpowered enemy's possessions; the culmination of a battle in the open field where the enemy camp is looted; and the outcome of a siege. Loot taken from the enemy was often publicly displayed by the victorious side back home, as honored war trophies. Sieges, field- and sea-battles, and privateering are all introduced as loot-generating forms of warfare. Crucial to the legitimization of war looting was the concept of bellum iustum, of going to war to secure peace, which was a feature ancient and medieval thought as part of the law of nations. From it emerged the notion of spolia iusta ("just loot"), which included such booty as the myriads of artworks shipped to Rome from the Greek east in the second and first centuries BCE. As Deuchler puts it (10) "Loot compensates for losses incurred - morally and materially."

Following the introduction, the book is divided into four parts. The first covers the ancient world. Deuchler starts with Megiddo and guides us through Nebuchhadnezzar, Croesus, fifth century Greece, to Philip and Alexander. The scene then shifts to Italy and Rome where he covers the First Punic War, Hannibal, Caesar, Augustus, the fall of Jerusalem, Trajan's Dacian loot, piracy and L. Aemilius Paullus' triumph of 167 BCE. (My detailed examples below are all drawn from this part of the book, since it is the area of my own expertise.)

The second part moves on to the Middle Ages and begins with Alaric, then Justinian, Charlemagne, the Crusades, various European military theaters and the conquest of Constantinople by Mehmet II in 1453.

Part three revisits Deuchler's previous work on the loot taken from Duke Charles the Bold following the battles of Grandson and Murten in 1476 [1] and includes a section of historical comparanda and assessment. The fourth and final part addresses the Late Middle Ages from the Great German Peasant Revolt of 1524-1525, to Machiavelli and other influentia writers (Montaigne, Cervantes, Grotius), Charles V's sack of Rome in 1527, and the loot taken from the Turks after the siege of Vienna in 1683. Two excursus close out the work, on slaves as items of loot, and ancient victory monuments and altars.

At various junctures throughout, Deuchler emphasizes the religious aspect of looting. For instance, he notes (23-5) the dedication of portions of booty taken from the Persian camp at Plataea (479 BCE) to Zeus, Apollo, and Poseidon. Only after these dedications had been made did the Greeks take the rest of the spoils for themselves (Hdt. 9.81). War looting enjoyed divine warranty.

As can be seen for the foregoing, within each part the chapters and subsections follow, for the most part, a straight diachronic format with successive documentations of war looting attested in primary or secondary sources, which are often quoted directly, at length, without comment. Some choices odd. In a section on "Hannibal" (36-42) we read about the sieges of Corinth (146 BCE), Numantia (133 BCE), and Asculum (86 BCE), all of which took place after Hannibal's death. For the numbers of Alexander's army, Deuchler prefers the highly dubious Alexander Romance over the ancient testimony of Plutarch (Alex. 15.1). The reader ought to check specific references for accuracy, e.g., Hdt 9.78-80 is quoted on 24-5 where the passages in question are actually Hdt 9.80-82. There is also a curious preference for general, older secondary material over more recent and focused studies. [2]

The book covers a lot of historical territory, so some of Deuchler's choices will not please every reader. I found curious his deployment of the legendary stories of Achilles and Agamemnon or the Sabine women as examples of woman-stealing (1-5) instead of using better documented historical examples, such as Alexander arranging the mass marriage of Persian women to his men (Arr. An. 7.4-5). Another odd decision is to begin his overview of the ancient world with the battle of Megiddo (ca. 1479 BCE) rather than with the Early Dynastic Sumerian, Akkadian, or even Old Kingdom Egyptian evidence of nearly two millennia prior.

Some treatments are perfunctory and selective, such as that of naval warfare and piracy (52-6). There are also surprising and major gaps. The first part, on Antiquity, makes no mention of the neo-Assyrian Empire (ca. 900-612 BCE). The Assyrian Royal Archives document annual rampages into neighboring territories that often end in long and excessively detailed records of all the loot taken. Surviving reliefs from Assyrian palaces show heaps of loot being counted by scribes. Whatever the official justifications the Assyrians offered for these campaigns, it is clear that seizing loot was one of their principle components.

No less curious is how, in the second section on the Middle Ages, Deuchler's diachronic survey jumps from Charlemagne to the First Crusade, leaving another major gap: the Norse. Viking military culture was built almost entirely around the acquisition of loot, some of which was put on display in the Great Halls of their chieftains. Viking warlords bound their warriors to them by the conferral of rich "gifts" (that is, loot) and competed among each other to be the most generous. That is to say, looting in no small measure drove their military and economic universe. [3]

There are some questionable claims, such as that aggressive siege warfare with engines, artillery, and escalade emerged during the Peloponnesian War (6) in the late fifth century BCE, when in fact such tactics were used by the Assyrians and Persians long before this and were introduced to the West by Dionysius I of Syracuse only in the fourth century BCE. Some might take issue with the statement (35) "The First Punic War was primarily a war over trade and the economy, whose geographic limits sat on the coasts of the Mediterranean." That may have been the Punic view, but for the Romans it was clearly a war to control Sicily and challenge Carthage for preeminence in the Western Mediterranean. Their dogged persistence in the war after losing 75% of their war fleet in storms off Sicily in 255 and 253 BCE, despite the great economic hardship this imposed on them, is enough to make this clear.

There are also bizarre errors of fact: Alexander is reported to have been 27 years old at the Battle of Chaeronea (28), fought in August or September 338 BCE. In fact, the prince had recenlty turned 18 (he was born on 20 or 21 June 356 BCE). In documenting Punic landings on Sicily in 218 BCE Deuchler (38), without explanation, cites Plutarch's Life of Timoleon in support; Timoleon was active in Sicily over a century earlier. It is claimed that 40,000 dead nobles were counted at Cannae (37). The apparent justification for the claim is that the Carthaginians plundered 40,000 gold rings from the Roman dead, and since gold rings were symbols restricted to equestrians and senators, this means 40,000 men of the nobilitas died at Cannae. But the equestrian order had not yet been fully defined by 216 BCE, and, in any case, equestrians were not members of the nobilitas, which denoted a fraction of the 500 or so men who sat in the senate. Sadly, Deuchler cites no source for the detail of the looted gold rings, but his citation of Livy 22.50 for the figure 40,000 Roman dead is inaccurate - Livy 22.49 (not 22.50) gives a total of 40,500.

In sum, Deuchler's book offers an useful catalogue of war looting from antiquity to the Early Modern era, although with some notable gaps. Readers should be wary of the details, not least the citations, which should be double-checked for accuracy. Overall, the book is heavier on description (backed by lengthy direct quotes from primary sources) than on analysis. It is a book, then, of limited usefulness but still worth having on the shelf when a quick reference is needed.

[2] See, e.g., J. Burkhardt: Griechische Kulturgeschichte, Stuttgart 1952 rather than D. Engels: Alexander the Great and the Logistics of the Macedonian Army, Berkeley 1980. The latter is not cited in the book at all.