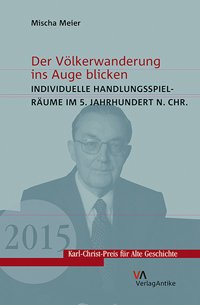 This slim (just over 100 pp.) volume presents the Vortrag given by Mischa Meier, Ordinarius für Alte Geschichte at the Universität Tübingen, in his capacity as the Preisträger of the 2015 Karl-Christ-Preis für Alte Geschichte. It commences with a laudatio (13-21) delivered by Uwe Walter and concludes with a voluminous catalog (75-102) of the prize-winner's publications. The meat of the discussion comes in the middle (22-74).

Few topics have excited as much scholarly and popular fascination as the end of the western Roman Empire in the fifth century CE, which often is seen as representing an archetypical conflict between barbarians and barbarism on the one hand and Romans and civilization on the other. Against this background, Meier investigates the interrelationship between influential individuals and the historical order in which they were embedded, and considers what agency ("Handlungsmacht"), what room to maneuver ("Handlungsspielraum"), powerful persons had (26). Were they able to influence such a complex process as the 'Fall of the Roman Empire'?

Meier commences with a survey of some of the continuing debates over the end of the Roman Empire and the significance of the "sogennante Völkerwanderung" (24), which often are interpreted from the perspectives either of "catastrophe," promoted by such as Brian Ward-Perkins and Peter Heather, or of "transformation," represented by the European-sponsored "Transformation of the Roman World Project" (1997-2004), not to mention other works. [1] More than before, Meier suggests, international scholarship struggles to find an adequate evaluation of the Völkerwanderung, a concept that, Meier notes, is not found in any contemporary text.

Meier rejects the commonplace polarized perception of decadent, passive, victimized Romans being overcome by energetic, active Germans; concludes that the boundaries between Romans and barbarians cannot be sharply drawn; and suggests that the barbarian groups of the Völkerwanderung were not ethnically homogeneous or stable. In his quest for examples of Handlungsspielraum, Meier chooses to study four paradigmatic "central protagonists" as representatives of the "long fifth century": three barbarians, Alaric the Goth, Gaiseric the Vandal, and Attila the Hun; and one Roman, the Patrician and Master of Soldiers Flavius Aëtius (33).

Meier makes the point that Alaric's band arose on Roman territory, was commanded by a general in Roman service who had been born on Roman territory, saw action in both the eastern and western empires, and remained inside the empire up to and after the death of Alaric. It thus was virtually a Roman creation (37). Meier concludes that Alaric's primary policies were to secure Roman office for himself and loot and plunder for his Verband (a useful term used to signify a generic armed force). In particular, plundering and extortion were essential means of gaining political influence (37). As a means of creating cohesion in his group, Alaric took the title of "rex". Alaric gradually formed what in ancient texts is called a "gens" or "natio". (38) Ultimately, Meier posits, Alaric failed to achieve large-scale success because of his indecisiveness about being integrated into the Roman sphere, which would have required him to give up his royal title, or opting for the barbarian world, which was incompatible with a Roman title (39). Ultimately, wedged between the interests of the Roman courts in west and east (41), Alaric was unable to free himself from his Roman context and lacked creative agency.

Gaiseric, Meier indicates, was in a different situation from Alaric, and eventually represented political power in his own right. Nevertheless, his actions largely were conditioned by Roman contexts that gave him little freedom of action (46). Thus, he survived threatened Roman attacks only by first crossing to North Africa in 429 and then seizing Carthage in 439. By 442, Vandal territory was recognized as an independent kingdom (45). Along with the usual plundering expeditions, Gaiseric also extorted money by selling grain to Rome. At first glance, this appears to be the successful implementation of a plan. Gaiseric's ambitions even included a dynastic connection with Valentinian III, and the western empire appeared to be a client state of the Vandals. (46). But this independence, Meier suggests, also created problems because Gaiseric still operated within a Roman framework (47). Vandal foreign policies always were geared toward Rome, there were clashes with the Berber kingdoms, and there was no long term solution for dealing with the majority Roman population, which was kept separate from the Vandals. At the same time that Gaiseric allied himself with the Roman imperial family he also cut ties with the old Vandal nobility and was forced to dig deeper into the Vandal social structure for support. For a small group, this was a serious handicap.

Then Attila. At the beginning of the fifth century, the dominion of a Hunnic warrior confederation, centered on the Hungarian plain, extended from the Black Sea to Gaul. Attila ruled this Verband since 434, first with his brother Bleda and then alone after 445, by which time the Huns were exerting great pressure on the eastern Roman Empire. As in the case of the bands of Alaric and Gaiseric, the Hun economy was based largely on plundering expeditions and extortion from the Roman government on an even grander scale. The Hun leader also united under himself a growing number of subject individual Verbände. Like Gaiseric, Attila attempted to preserve cohesiveness within his Verbände and maintain his own control by keeping Huns separated from Romans; he even compelled the Roman government to return Hunnic refugees (55). Attila's authority began to crumble, Meier argues, when Attila himself penetrated this firewall between Romans and Huns by demanding the western princess Honoria as his bride and even, when in 451 he invaded Gaul, by claiming to be the supporter of the Romans (57). Doing so weakened his position among the Huns, and it was the progressive intertwining with the Roman Empire into which Attila was driven that finally carried him to doom (57).

Finally, Fl. Aëtius, the putative "last of the Romans," who, even if he was not a barbarian, acted in the same frame of reference and was confronted by the same issues as barbarian leaders whose position was dependent on their control of armies. Meier argues that Aëtius operated strictly for the sake of his own personal gains as opposed to the interests of the empire, and that he shaped Gaul as the focus of his activities (59). Even if he was not able to reverse the decline of the west Roman Empire, for a few years he was able to reduce the speed of the disintegration process (59). He fought not as a Roman against barbarians but essentially for his own interests, supported by both Roman or barbarian troops. Once he had achieved the highest military office, Meier argues, there remained for him no other option than to proceed on the accepted path. Attila's effort to disable Aëtius by invading Gaul backfired when it gave Aëtius the opportunity to create a multi-ethnic confederation to oppose him (60). Aëtius' victory enabled him to counteract, for a time, the instability of his own position,

Following Leo Tolstoy, Meier decisively rejects the "great man" theory of history and concludes that none of these protagonists was able to create lasting effects on the Völkerwanderung period. All of these individuals acted in frameworks whose overall order was defined by the Roman Empire (62). Alaric, for example, flitted about aimlessly between the barbarian and Roman worlds and was crushed between the conflicting interests of both imperial courts (61). Even though Gaiseric at first appeared to be an energetic actor, his sphere of influence (Gestaltungsspielraum) remained limited because he was not able to rise out of the shadow of Rome, and the Vandal kingdom collapsed with Belisarius' invasion in 533. Attila, in spite of his warlike successes, like Alaric should be judged more as being externally driven than as a visionary creator (57). After Attila's death, the powerful Hunnic warrior confederation swiftly broke apart (52). And when Aëtius attempted to interfere in the dynastic succession with the betrothal of his son to the princess Placidia, he aroused the opposition of Valentinian III and was murdered (61).

A leader's authority, Meier suggests, was based on prestige that came from successful military expeditions. Warrior bands did not produce any products themselves so their economies were based on plundering. This created an ancient version of the Ponzi scheme: the more successful a leader was at acquiring loot, the larger the warrior Verband grew, and the more plunder that was needed to sustain it. A leader like Attila was condemned to have continual military success in order to obtain the requisite booty (52). Ultimately, the need for booty no longer could be met, and after two or three generations, Maier proposes, these gigantic coalitions overextended themselves and could collapse very quickly (51). The need for these protagonists to pursue short-term goals in order to ensure their own survival precluded looking for long-term solutions that would either create alternatives to Roman rule or ensure the survival of the empire.

In sum, this very concise and cogent study not only avoids the pursuit of extreme agendas that characterizes some current scholarship but also offers a framework that can help to create a "unified model" for understanding the role of powerful generals in the collapse of the western Roman Empire. The inclusion of Aëtius in the discussion in particular makes an emphatic point that it was not just barbarians who created their own warrior bands and carved out their own local spheres of influence; Romans could play that game too.

[1] E.g. R. Mathisen / D.R. Shanzer (eds.): Romans, Barbarians, and the Transformation of the Roman World. Cultural Interaction and the Creation of Identity in Late Antiquity, Aldershot 2011.