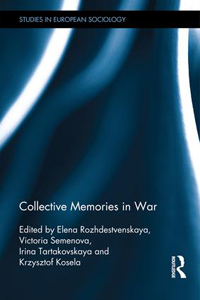 Interdisciplinary studies are a common diversion of progress in social sciences and the humanities. The volume Collective Memories in War is a successful example for the combination of sociological and historical methods in order to study the past in the present. The authors examine war conflicts of the 20th century, primarily the Second World and the Afghanistan war, from the perspective of the present generation. Thus the memory about the historical events becomes an analyzed subject in this study. The unifying principle of all chapters is to present memory as a temporal process, that is "the process of rewriting memories as a result of changes in the political climate of the Eastern European countries" (2), primarily in Russia and Poland [1], since most of the authors had participated in the collective project "Historical Memory as a Mechanism of Identification and Socialization: Comparing Russia and Poland" in 2009-2011 (189). As Victoria Semenova states, "memory becomes an instrument for reconstructing past events in the interests of the present and it is at this moment that memory induces several regulatory rules for the creation of narratives and representations of the past (how it 'should' and 'should not' be remembered)" (126). This idea is relevant to the whole volume, while it appears that the editors' tendency to systematize chapters according to the three levels of memory, i.e. social memory (or memory at the national level), collective memory, and individual memory (2) becomes complicated due to the very deep interconnection of these levels in the natural remembering process.

The proportion of the studied cases devoted to the Second World War and the Afghanistan war is not the same. Most of the presented chapters examine the collective, social, and individual memory about the latest war namely in contemporary Russian society. Elizaveta Polukhina and Alexander Malyugin made a discourse analysis of the Russian school history textbooks published from 1990 to 2010 to trace the diversity of the representations of the Afghanistan war in different political periods (chapter 4). They argue that "the authorities create a discourse of school textbooks that supports their interests" (55). The role of the memory sites devoted to the Afghanistan war in city spaces is examined in Anna Strelnikova's chapter. The author states that the collective memory is centered in a modern day ideology of the history of Russia, the dominant role of war memorials in many city spaces is gradually declining, and they are being replaced by monuments with peaceful and nonthreatening images (120).

The role of the local Afghanistan war museums forms the subject of the inside-out study of Irina Tartakovskaya and Elena Rozhdestvenskaya (chapter 7). Although such museums attract different groups of visitors, such as schoolchildren and patriotic youth, they especially "serve the Afghan veterans as an important recourse for identity formation" (p. 97). Irina Ksenofontova researches Afghan veterans' websites (chapter 12). She describes the main components of such forms of a veterans' community, among which are memorialization, stimulation, and preservation of memory, information-sharing, passing on of knowledge and creating solidarity (158).

Semistructured, in-depth biographical interviews with veterans of the Afghanistan war, born between 1957 and 1965, both former soldiers and professionals (officers) become the main analyzed source for a number of chapters. Elena Rozhdestvenskaya compares two very different sources: individual narratives by the surviving veterans from the point of view of the memory of social actors in an event on the one and the obituaries to the fallen as a form of public memory regarding the "Afghaners" on the other side (chapter 11). Irina Tartakovskaya analyses the masculinity-constructing process in the veterans' narrations (chapter 13). She identifies two basic conceptual constructs: war as a trial successfully overcome thanks to individual manliness, resourcefulness, and solidarity; and war as the best years of one's life - the peak of self-expression (174).

Contrarily, Victoria Semenova in her chapter "Wounded memory and collective identity" seeks in the veterans' narratives an answer to the questions "how collective memory discourse becomes structured over time after traumatic events and how memory's regulative function works to construct collective identity, including the processes of narrative normalization (what 'should' and 'should not' be mentioned)" (125). The bodily and emotional experience of Russian male veterans of the Afghan war is the topic examined in Alexandrina Vanke's chapter. She argues that the Afghan veterans' emotionality is normalized in three regulative directions: the institutional level of the army, the macro level of the current gender regime in contemporary Russian society, and the level of the Afghan male veterans' community (186).

Thus the reader gets a more or less complete overview of the dynamics of the collective remembrance of the Soviet war in Afghanistan in contemporary Russian society. The cases of the collective memory about the Second World War, especially in the post-Soviet countries remain to be kind of a blind spot in the reviewed volume. Although there are several chapters about remembering the Second World War in the Polish society (chapter 5 deals with the analysis of the school textbooks about three crucial events in the history of the Second World War for the Polish society; war memorials in Warsaw as memory sites are studied by Krystyna Ewa Siellawa-Kolbowska in chapter 8), there is no correspondence of these cases with the situation in Russia and/or in the other post-Soviet countries. It is well known that today's Russian patriotic concept of a strong state is constructed on the idea of the victorious nation in the Great Patriotic War (that was part of the Second World War, namely the German-Soviet front). In this respect the part of Oksana Danylenko's chapter where she compares Russian, Ukrainian, and Belorussian school textbooks about the representation of the war deserves special attention, as well as part of Anna Strelnikova's essay about the place of monuments devoted to the Second World War and the Afghan war in the city space (115-119).

Yael Zerubavel's remark that "collective memory, like a pendulum, is in endless motion - from historical sources to modern socio-political problems and concerns, and from modernity back to testimonies of the past, striving to bring them together" (172) [2] is of high relevance to the results of the reviewed volume.

[1] There is only one chapter devoted to remembering the war in the Czech Republic and one more about constructing the narrative about the past in the Ukrainian school textbooks (see chapters 3 and 6).