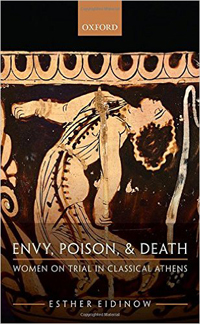 Esther Eidinow with admirable agility brings together a range of topics crossing cultural boundaries and temporal periods to bear upon the trials of three women in the first half of fourth century Athens: Theoris, Ninon, and Phryne. In Part 1 ('Women'), exiguous ancient sources for the trials are reported; every thread is meticulously followed to find the offence: it is asebeia, but its constitutive components may have been multiple - e.g., magical or supernatural activities, introducing new gods. From this beginning point, Eidinow's overall aim is 'to recover a history of society through the experiences of these women' (5).

To arrive there - at the big picture of the political and economic situation of Athens during the first half of the fourth century - a picture including population shifts and economic decline after Athens' defeat in the Peloponnesian War - requires us to understand 'locally meaningful contexts of feeling and understanding' (5, quoting Tarlow 2000: 719). Hence the study and contextualizing of emotion comes into play. In Part 2 ('Envy'), Eidinow examines the role of phthonos (envy) in local social dynamics; this includes studying narratives of phthonos across genres (Pindaric praise poetry and forensic oratory). 'Phthonos talk' comes to the fore at the end of Part 2 and takes over Part 3 ('Poison') where Eidinow turns to two genres of gossip, public (in lawcourt speeches) and private (as in epitaphs, curses, confessional inscriptions, and binding spells).

At the end of Part 3, she returns to her starting point: after observing insinuations and allegations ('gossip') in different orations, that Demosthenes had been Aristarchus' accomplice in the murder of Nicodemus (Aeschin. 1.172; 2.148; Din. 1), Eidinow notes that no charges for murder were ever brought against him; why, then, she asks, were the three women tried, in whose cases gossip, too, might be assumed to have played a large role (262)? What makes a person a suitable target not only for gossip but also for legal action? In Part 4 ('Death'), Eidinow seeks an answer by examining the wider political and economic context of post-Peloponnesian War Athens. In a short epilogue ('Social Trauma'), she suggests that 'the trials of these women are evidence for social trauma, and that they occurred within a society in which a sense of unity had been severely and catastrophically disrupted' (330). Gossip charged with envy, she concludes, was the means by which 'the Athenian community was identifying the activities that it found threatening and deserving of social censure' (335).

A summary of chapters cannot do justice to the wealth of discussion. Every chapter provides methodological and theoretical orientation: cross-cultural studies of witchcraft trials provide orientation for linking envy, gossip, and supernatural power as the background of the women's trials (9, 155-6, 332-3). Part 2 begins with an excellent treatment (80-101) of current trends in emotion studies (a significant component in recent studies of ancient rhetoric and law). Part 3 begins with a look at gossip through the lens of contemporary research in evolutionary psychology and anthropology (171-79) and folds in conceptual metaphor theory (243) and social network analysis (256) as well. Part 4 has foundations in modern trauma (329-30) and witchcraft studies (331-2).

The strengths of Eidinow's work lie in her familiarity with a broad range of material (though one misses some discussion of Apuleius' Apologia and mention of the sanctioned incantations in the XII Tables); and above all, in her expertise, well-founded on earlier work (esp. Oracles, Curses and Risk) with curses, confessional inscriptions, and binding spells. She is gifted at singling out exempla to illustrate important points. Thus in Part 2, against the backdrop of social constructionist theories of emotion in which particular social contexts become significant, a passage from the Praktikos of Evagrius of Pontus is palmary for showing the evolution of the emotion acedia (akin to depression) into bitterness. The speaker of Lys. 12 who uses phthonos in his description of Theramenes' motivations is an excellent example for the social context of phthonos in a forensic speech (126). Narratives of Gemellus Horion (landholder in Karanis in the Egyptian Fayum, 197 CE) and especially of Libanius, showing both men as victims of magical activities and phthonos, exemplify how human phthonos (esp. of another person's success) played a part 'in structuring experiences of otherwise inexplicable misfortune' (155-61). The passages illustrating the gossip about Demosthenes' crime against Nicodemus (mentioned earlier) are also well chosen (though misrepresented in the end, 260: Demosthenes did not flee into self-imposed exile because of these allegations!).

Part 3 ('Poison') with its widely ranging discussion of pubic and private gossip may be the most innovative in the book, both for its deployment of modern studies and its presentation of curses and confessional inscriptions; it may also be the most provocative. Gossip is presented in a broad sense in opening sections that examine recent research of evolutionary psychologists and anthropologists; the distance from this reader's (pre-Eidinow) conception of gossip may be measured by the discussion of the importance of shared references among gossipers (178-9). Here Eidinow adduces (via Widlok) the 'topographical gossip' of the Hai||om Bushmen of southern Africa who construct maps of their world by gossiping about the topography and plants of the places they travel. One's expectation that the definition of 'gossip' will be considerably expanded in what follows is fully met. Eidinow offers a good distinction between slander (diabolē) and gossip (for which there is not really a single word in ancient Greek): the former is the speaker's own malicious charge against his opponent while the latter is talk shared with a third party. Often gossip (and implied third party discussion) is indicated by an opening phrase such as 'Everyone knows that So-and-So did Such-and-Such.' This gambit and other rhetorical devices allow speakers 'to imply a different kind of truth claim in their speeches' (197). This (identification of gossip through expressions such as 'everybody knows') works in many cases, but one may hesitate to root such passages as Lys. 13.77 (199) and Lyc. 1.19 (205) in 'gossip'. The speaker of Lys. 13 is more likely to have heard Agoratus' arguments at a pre-trial procedural meeting (13.86-88); witness testimony reported in Lyc. 1.19 will have been written by Lycurgus himself (and so will have a 'different kind of truth claim' than run-of-the-mill gossip) and is additionally buttressed by an offer of an oath of disclaimer if witnesses refuse to confirm (see, e.g. Engels, Lykurg 2008: 128); moreover, to regard the evidence of Phyrcinus whom 'most of you know as the accuser of Leocrates in the Assembly' as founded in the 'gossip' of the Assemblymen appears to ignore the phenomenon of an oral record (with perhaps dual roots, the Assemblymen themselves and the ephemeral memoranda of the secretary of the boulē) in the interest of expanding the notion of gossip. It might well be helpful to create a more nuanced, even if blurred, boundary between 'local knowledge' (or 'communal record') and 'gossip'.

With such diverse material deployed within the confines of a single volume of moderate size, reservations are unavoidable. First, the conceptual linkage between its first two segments appears fragile: it is difficult to articulate how phthonos becomes a weighty part of the narrative of the three trials that stand at the book's core. It first enters discussion of the ancient material in connection with Aretaphila (Plut. De mul. Virt. 256b-c); she is alleged to have tried to kill her husband Nicocrates, tyrant of Cyrene (80s BCE), but (falsely) claims she had used love potions; because she was held in envy (epiphthonos) by bad women, she feared to use their potions and so had made her own (33). At the end of Part 1 (66-7), envy is linked to 'magic-making' in a curse tablet of the fourth century (NGCT 24); it calls down curses upon anyone who has cursed the curse composer out of envy 'of me, my work and deeds.' Two of the three women tried in Athens are also linked to 'magic-making' (via pharmaka) in some sources (Theoris in Dem. 25.79-80, a speech of dubious authenticity; Ninon in a scholion to Dem. 19.281: 495A [Dilts] which, set next to 495B [Dilts], has the look of guesswork); those thin threads are possibly strengthened by the step-mother's fatal love-potion in Ant. 1 (though there appears to be nothing supernatural about her love potions) and Aristotle's famous report of a woman tried in the Areopagus for using a fatal love potion (again, no supernatural qualities are mentioned); but neither woman is explicitly linked to phthonos. While we are perhaps to read envy into the social context of the trials of Theoris, Ninon, and Phryne, the sole explicit link between envy and the fatal potions of women is in Plutarch's narrative of Aretaphila in the 80s BCE. This is a fragile thread (not really strengthened by NGCT 24) with which to connect the trials of the three fourth century Athenians to phthonos (cf. Eidinow's summary, 162).

It is all the more fragile when in the course of Part 2 readers are presented with that brilliant passage from the Praktikos of Evagrius of Pontus that so well demonstrates the change of meaning in the emotion of acedia over time. Readers are prompted to consider historical change; yet they have also been prompted not to expect consideration of the problem. Thus in the programmatic introduction: 'Underpinning this analysis is an assumption that there are cross-cultural, and diachronic similarities between emotions. This book does not attempt to explain how this occurs or in what ways vernacular emotion concepts connect across cultures, which categories they belong to, or the ways in which they have evolved' (6, with n. 7, pointing to a 'useful start' on such questions in Griffiths 1997). Well, that is having your cake and eating it too.

Other reservations of treatment and interpretation, of less far-reaching implication, must be omitted here for lack of space. Regardless of the objections mentioned, Eidinow's book is certainly a worthwhile one, especially for introducing readers to a plethora of theoretical approaches, for providing a genre-crossing and extensive swath of material for discussion, and offering close readings that are smart and stimulating.