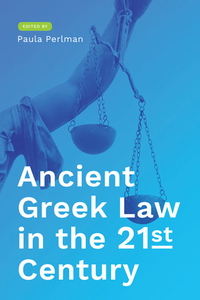 The future of classical studies, including ancient Greek law, is regularly thought to be in peril of gradual marginalization. However, the volume, which originates from a conference held in the spring of 2011 at the University of Texas, Austin, demonstrates the vitality of the field and its close association with other disciplines in humanities and social sciences. The objectives of the conference included among others "to assess the current state of the field and to explore its future". Both aims are superbly served by the introductory and the eleven following essays. The publication concludes with three useful as well as indispensable indexes: of passages, of transliterated and translated Greek terms and a general index. Bibliographical references are not piled up at the end of the volume but at the end of each essay, thus making consultation an easy task, despite the unavoidable duplication.

Browsing through the volume, it may appear spineless but the eleven essays therein form three coherent sections concerning: i) new directions for further research in terms of substance and method (contributions by Lanni, Velissaropoulos-Karakostas, Hansen, and Thür), ii) state of the art in current discussions about salient features of ancient Greek law (articles by Wallace, Cantarella, Gagarin, and Cohen), and iii) areas not intensively researched so far (essays by Maffi, Dreher, and Rubinstein).

In the brief but concise Introduction to the volume Adriaan Lanni and Robert Wallace review the history of ancient Greek law as a distinct discipline in the frame of legal history (mainly in European continental universities) and classical studies (in the Anglophone world), through the pivotal role played by the bi-annual Symposion conferences.

Robert W. Wallace in "Administering justice in ancient Athens. Framework and core principles" (10-24) revisits the central question in recent scholarship, whether Greek law had preponderantly a procedural or substantive focus. He argues for a reassessment of the current emphasis on the procedural character and brings forward evidence for its long underestimated but strong substantive elements. Wallace goes one step further and advocates to abandon the division "substance" - "procedure" but to approach Athenian law in accordance with the interests of the democratic community.

Eva Cantarella in "Revenge and punishment" (25-34) argues against a recent tendency to confuse and identify the concept of revenge with punishment; she contends that revenge is a different and perhaps wider notion than punishment, which is always inflicted in a legally defined manner. In her words: "to doubt the conceptual distinction between revenge and punishment means to confuse social ethics with institutional principles".

Michael Gagarin in "Hyperides's Against Athenogenes and the Athenian law on agreements" (35-53) re-examines the central argument of Epikrates, the speaker, namely that not all agreements were binding (hence enforceable) in Athenian law. Gagarin's approach is more attentive and sympathetic to the speaker's arguments, something bypassed by several scholars. Following a review of the discussion on the exact wording of the law and its various versions in the corpus of Athenian law court-speeches and how it was applied, Gagarin shakes the current consensus regarding the display of legal acumen and investigation by the speaker. Epikrates aims to demonstrate "more precisely what kinds of conduct were considered unjust by Athenian legislators" and not "to show by analogy that the law applies only to just agreements". To my mind, what Epikrates does is to focus on the element of deceit, prevalent throughout the speech; this is clearly the target of the first two laws the speaker refers to. The laws on concluding a lawful marriage and drafting a lawful will cannot but serve as parallels to the legality of the agreement struck and not the kind of conduct regarded as unlawful. Gagarin's approach has important ramifications on the interpretation of the whole dispute, since he concludes that the dispute is not about legal interpretation but about the facts of the case. However, the assessment whether a behavior is deceitful is a legal one not a factual one, since both sides concede that there was a reference to debts in the agreement.

Hyperides' speech plays a central role in Edward E. Cohen's contribution "Slaves operating businesses: Legal ramifications for ancient Athens and for modern scholarship" (56-69). E. E. Cohen, a scholar with deep knowledge of finance and economics in ancient Athens, reconsiders the gap between the legal inability of slaves and their prominent role in commercial activity. This dissonance is explained if we consider slaves as bearing personal liability for the debts they have contracted. However, this conclusion sits uncomfortably with the argument of the speaker in Hyperides' Against Athenogenes, who assumes that the debts of the slaves he bought will ruin him.

The second section includes articles exploring areas of legal history that so far have not been addressed, as intensively as other. Alberto Maffi in "Toward a new shape of the relationship between public and private law in ancient Greece" (70-84) advocates the need to redraw the borders between public and private, if we are to avoid a repetitive enumeration of magistracies and their remit, in order to understand the function of the polis as a state. "Public" and "private law" are intertwined in the life of the average Athenian, exercising a magistracy, acting as volunteer prosecutor, involved in leases of public property, and polis' loan agreements.

Martin Dreher in "'Heiliges Recht' and 'Heilige Gesetze': Law, religion, and magic in ancient Greece" (85-103) attempts to disentangle the blurred relation between the sacred and the legal, in the level of terminology. He distinguishes between the sacred elements incorporated into the law of the polis (sacral legal forms, like oaths and sacred fines) and sacred laws (legal regulation of the religious sphere).

Much wider in scope and source material is the contribution by Lene Rubinstein "Summary fines in Greek inscriptions and the question of 'Greek law'" (104-43). She defines summary fines as those imposed by magistrates with no recourse to law courts or other adjudicatory body and examines instances in poleis except Athens. Following an assiduous and detailed methodological section outlining the limitations and principles of her investigation, she identifies three main features of summary fines: i) explicit indication of the amount with no reference to adjudication, ii) unequivocal mention to the absolute authority of a magistrate, iii) categorical recommendation to reconsider the imposed penalty if there is objection by the fined individual. Rubinstein finds no correlation between summary fines and the constitutional outlook of the polis. The chronological and geographical breadth of summary fines lead her to re-instate the usefulness of the Greek law as an analytical concept.

The third section is perhaps the most ambitious as the contributions attempt to break the mould of traditional legal history, to extend its conceptual boundaries into private international law theory, legal sociology, comparative law, politics, and rhetoric, and to initiate a dialogue with scholars of different academic traditions. Julie Velissaropoulos-Karakostas in "Soft law in ancient Greece" (144-56) introduces a concept of international private law theory, that of 'soft law'. The term designates legal enactments with no prescribed sanction or issued beyond the official channels of legislation. The author, despite the inherent danger of anachronism, attempts to identify similar phenomena in Greek antiquity. In her quest, she discusses inter-poleis agreements (homologiai) that were not adopted by decree, the recourse to the "most just opinion" by (lay-)judges and arbitrators.

Adriaan Lanni in "From anthropology to sociology: New directions in ancient Greek law research" (157-71) reviews the anthropologically inspired and informed studies on Greek law and society since 1990 and advocates the usefulness of adopting novel avenues stimulated by the law and economics theory (not limited to new institutional economics) and by the theory of social norms in legal sociology. In particular, the latter may be proven very helpful in understanding the impact of social norms in the law court speeches, and especially in the rhetorical and legal strategy of the orator, besides the customary exposition of legal arguments.

In a similar vein, political anthropology and comparative studies inform Mogens H. Hansen in his essay "Oral law in ancient Greece?" (172-92) on whether orally transmitted law existed and whether it also existed in ancient Greece. Following an extensive presentation of historic and ethnographic data on orally administered law in late antique Lombard kingdom (prior to AD 643), medieval Iceland (before c. 930), Inca empire (prior to 16th cent.), Adkeme Milga tribe in Eritrea (before 1942), Albanian kanun (before the early 20th cent.) and Valencia's water-courts (first attested in 1239), Hansen claims that oral law is a viable alternative to written law. Taking into account the earliest written law from Dreros and its implication for the remaining rules regarding the office of kosmos and the fifth-century Athenian debate about patrios politeia, he concludes that on balance, the existence of oral law in early Greece before the advent of writing in the 8th cent., cannot (and should not) be ruled out.

Last but not least, Gerhard Thür in his contribution "The future of classical oratory" (193-207) deals with the usefulness of teaching rhetoric and ancient Greek law through Athenian-style moot trials to modern law students. What is most significant in Thür's analysis is the methodological excursus on the ways evidence was presented, paraphrased and interpreted in Athenian law courts. The plaintiff, who had the advantage of addressing the court first and, thus, potentially masterminding a reception favourable to his cause, shaped the dispute by the plaint he submitted and the ensuing hearing before the magistrate. Litigants reconstructed the facts of the case creatively (bordering lying and manipulation according to Thür) to suit their narrative and interpretations.

I could spot only two spelling mistakes in p. 28: όργὰν for ὀργὰν and p. 132 n.15: οἱ for οἳ. Overall, the volume balances successfully between tradition and innovation, furthering discussion over long debated questions and at the same time providing inspiration to established and younger scholars for fresh approaches to be pursued.