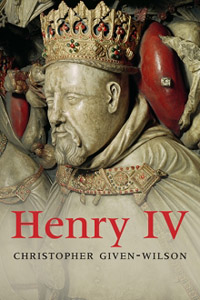 Henry IV was the first usurper in a century of usurpations that led England's monarchy to the very weakest moment in all its medieval history. The effects of Henry's seizure of the crown were perceptible in the English polity even as it entered the new age of Reformation and Renaissance in the sixteenth century. Yet over six centuries few have made him a study in kingship. Contemporaries were too far transfixed, at first by the drama of his deposition of the anointed king, and then by the troubles that haunted his every step towards securing a hold on power, apparently the fulfilment of all manner of portents, prophecies and scriptural homilies of the punishment to befall the man that sins. It was these 'meteors of a troubled heaven' that coloured William Shakespeare's treatment of the reign which represented King Henry as man diminished by his success 'so shaken' and 'so wan with care'. Like Shakespeare, modern historians have been more inclined to trace the causes (Edward III, Richard II) and the consequences (Henry V, Henry VI) of his reign than to return to his time-worn tale of fateful tragedy. The raw material for research is sparser than for the late Plantagenet or the later Lancastrian regimes but in twenty years of critical scholarship Chris Given-Wilson has mastered these records - especially the handful of chronicle accounts - and it is natural that he should break with the tradition of neglect to consider Henry's record, comprehensively, for the first time.

This is not, narrowly, a study in kingship. Given-Wilson recognises that an understanding of Henry's brief, turbulent tenure of the throne must be grounded in an exploration of the elite society into which he was born which at the turn of the fourteenth and fifteenth centuries was profoundly disturbed by internal divisions and external threats, apparent not only in the English kingdom but across much of the European mainland. His immediate circumstances were conflicted: the eldest son of only the third son of the reigning monarch, he was not born to reign but his patrimony rivalled the crown in its cash wealth (£12000 per annum) and regional power. From the first he would have known his inheritance to be no less than 26 castles in England and Wales and the capacity to ride from the south coast of the kingdom to within sight of the Scottish border without leaving his Lancastrian domain. His experience of great lordship - the greatest lordship, short of kingship, that was possible in the temporal sphere - moulded him as a man and later served as his manual for monarchy. His taste, indeed, his need for the semi-regal trappings of great lordship was manifest even in the most ephemeral moments of his daily existence, requiring escutcheons to be nailed to the door of the bedchamber wherever he lodged. His understanding of the machinery of such lordship, the demands of an affinity and also its capacity when managed with discipline and deployed effectively gave him a measure of his cousin, Richard's shortcomings and a guide as to how to hold on to his rule when he found his own kingship assailed. Given-Wilson argues that where royal government did indeed work to stabilise the regime, perhaps especially in the years after 1406, when he found some respite from rebellion, it was through the successful operation of the old Lancastrian machine.

Young Henry was also marked, as were all English nobles of his generation, by the series of jolting crises that followed the death (1377) of his long-reigning grandfather, Edward III: a popular revolt (1381) that reached across the kingdom and raised a spectre of social revolution; a popular heresy (Wyclifism) which threatened to legitimate the challenge to lordship; a courtly row (led by the Appellants) that escalated to the brink of civil war and the deposition of the king. Henry was not affected in the same way as Richard. His ring-side view of the Peasants' revolt convinced him more of the pragmatic value of might in the exercise of lordship than any principle of (divine) right. The challenge to Mother Church seems to have bred in him a sincere piety more sober than Richard's, lacking the latter's somewhat exotic historicism; it coloured his personal and family life, and the upbringing of his sons and also informed his choice of counsellors, among them the learned divine - and recanted Wyclifite - Bishop Philip Repingdon of Lincoln. His part among the Appellants affirmed his trust in the powerbase provided by a seigniorial territory and, perhaps crucially for the later course of his reign, taught him much about effective military campaigning, both practically and in respect of its currency as propaganda.

Given-Wilson places particular emphasis on Henry's early and sustained successes on the battlefield. A seasoned campaigner long before he raised an army to take the crown, he suggests it was his 'camp-fire cameraderie' that was a key ingredient in the following he was able to command even in the intensely difficult years of fighting that followed the deposition. As a young man Henry pursued martial skill for its own sake, seeking out the competitive tournament and echoing the rising enthusiasm of his peers for the Holy Crusade. With characteristic pragmatism, Henry attached a higher priority to his domestic campaigns but Given Wilson shows to the end of his reign he continued to raise the prospect of crusade and to speak of his own prowess as a proven warrior.

Given-Wilson argues that the removal of King Richard was a personal triumph of this wily veteran of the lists. He outwitted and outmanoeuvred him and made the absolute best of his innate advantage of the Lancastrian affinity. Yet he could not repeat it. For almost a decade after Richard's surrender at Conwy, Given-Wilson describes Henry in the attitude of a man who is falling but never quite hitting the ground. As it happened, his might could not adequately answer the questions of right raised repeatedly in the ranks of the nobility, the prelacy, the regions of England, and on its borders. Ironically, Richard's right accrued a posthumous power. Helpfully, Given-Wilson does divert attention from the catalogue of near collapses to the record of Henry's practice of royal government which in the second half of the reign achieved some stability, if not the development, still less the innovation that would follow under his son.

Written on commission to join the most distinguished Yale series, Given Wilson has followed the publisher's template in offering a soundly evidenced biographical survey. He does not allow himself to pause for very long to pursue some of the themes, and remaining questions, that are sharply focused by the reign. Nor is there more than a conventional discussion of the personality, or psychology of a man who would be king; in fact, notably less than Nigel Saul entered into in his study of Richard II in the same series. Yet his deep understanding of the febrile society that made Henry, his insightful reading of neglected sources, archival and chronicle - among them the Kenilworth chronicle of John Strecche which alone credits Henry as an accomplished musician - combine to make this a very welcome stimulus to what we must hope may be a new industry in the study of the first of the Lancastrians.