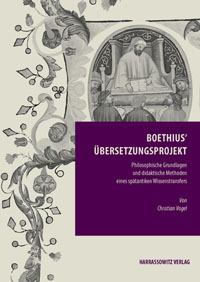 In a famous passage in his second commentary on Aristotle's Peri hermeneias, Boethius announces his plan to produce Latin translations of and commentaries on all of the works of Plato and Aristotle and to demonstrate that the two authorities agree in plerisque et his in philosophia maximis. [1] Boethius' plan was only partly realized, but together with his Consolatio Philosophiae, the Latin translations and commentaries on the Organon that he managed to complete before his execution around 526 CE became by far the most important contributions to the transmission of Greek philosophy to the Middle Ages. Vogel's book is a study of what he regards as four different "levels" ("Ebenen") in this "Wissenstransfer".

In the introductory chapter of his book, Vogel identifies these levels as follows: (1) the translation as such as a transmission of the Greek text to a Latin audience and (2) the exposition of the text to ensure that the reader understands its true meaning. Furthermore, beyond the immediate philosophical content of Boethius' works on logic and the Consolatio, Vogel finds that his works transmit (3) theories on the human soul and (4) an educational theory ultimately based on these theories. The subsequent chapters of Vogel's book expand these four aspects, which are regarded by Vogel as deliberate strategies behind Boethius' project. It should be noted that, throughout the book, Vogel's observations rest almost exclusively on passages in the two commentaries on Porphyry's Isagoge, the second commentary on the Peri hermeneias and the Consolatio. No explicit reason seems to be given for this selection of sources.

In the following chapter, "Bildungstheoretischer Rahmen des Übersetzungsprojekts", Vogel argues that references in Boethius' logical writings to intellectual activity as necessary for the perfection of the soul, the definition of philosophy as the enlightenment of the intelligent soul, and Philosophy's efforts in the Consolatio to rescue Boethius from his material misery to true immaterial happiness are all manifestations of an underlying theory of education by which the human soul reaches its perfection through the study of philosophy. Vogel concludes the chapter by taking his reconstruction one step further: this underlying theory of education is, according to Vogel, the overall rationale for Boethius' project as a whole: "Jede seiner Übersetzungen oder Paraphrasierungen platonischer, aristotelischer oder neuplatonischer Texte dient dem Verständnis einer ganzheitlich erschlossene Philosophie, deren Wesen ein Streben nach Weisheit ist, das in Glückseligkeit mündet" (31).

This conclusion highlights a problematic aspect of Vogel's book. His claim in the "Fazit" of the second chapter that Boethius' ambitious plan can only be understood in view of the "bildungspraktischen Konsequenzen" of Platonism is, unfortunately, not followed up by a discussion of the obvious difficulties of drawing a clear line between Boethius' own intention and the standard elements of the tradition of the Greek commentators. Few would object to the conclusion that Boethius is influenced by Greek Neoplatonism. But does the fact that this manifests itself in his theories on the human soul necessarily mean that the main reason behind his plan to translate and comment on Aristotle is the Platonic idea that his works will contribute to the reader's soul reaching its perfection? I will return to a similar methodological issue towards the end of this review.

The next two chapters analyze levels (3) and (4) above: In chapter three, "Boethius' Seelenkonzeption - Beispiel eines impliziten Wissenstransfers", Vogel demonstrates that although Boethius' project never got as far as Aristotle's De anima, and thus did not result in a systematic "explicit" account of Aristotle's theories on the human soul, a consistent theory of the soul in line with the Aristotelian view may nevertheless be reconstructed through certain passages in Boethius' logical works and, from a more general perspective, through the Consolatio.

The fourth chapter, "Boethius' Sprachkonzept", is a lengthy account of how this theory is also the foundation of Boethius' concept of language as displayed in his logical writings. Vogel here spends considerable effort defending Boethius against previous criticism for rendering both σημεῖον and σύμβολον with the Latin nota. Various alternative translations are discussed and rejected and Vogel concludes - mainly on the basis of John Magee's competent and convincing analysis, but also heavily relying on Taki Suto's observations - that Boethius' translation is not an error but reflects his interpretation of both Greek terms as synonymous.

Vogel's book is well-structured and its scope and line of argumentation clear. The summaries ("Fazits") that close each of the chapters are concise and very helpful for the reader. Vogel provides a number of interesting examples to support his conclusions and his translations of the relevant passages make his study easily accessible for readers without knowledge of Latin. For the reader who does read Latin, however, an unfortunately large number of misprints in the many quotations, mainly in the footnotes, detract from the general impression of a meticulous work. But more importantly, Vogel too rarely relates his conclusions to previous works in the field. Since his interpretation of Philosophia's role and the effectiveness of her cure is important for his line of argumentation, I would, for example, have expected Antonio Donato's recent monograph on the Consolatio [2] to have been recognized and taken into account. Moreover, Vogel does not devote enough attention to the long-debated question about the intention behind Boethius' method of composing two commentaries on the same Aristotelian work, or to the fact that the translations exist in several recensions (the difficult issue of the chronological interrelation of Boethius' works, which is highly relevant for the former question, is left out, and the latter question does not seem to be discussed at all). Some rather striking characteristics of Boethius' translation technique are also left out of the overview in the last chapter ("Boethius' Übersetzungstheorie und -praxis"): for example, there is little mention of the fact that Boethius' terminology is influenced not only by the Aristotelian works that he is translating but also by the tradition of the Greek commentators, or of the Grecisms that seem to enter via his translation activities into his own Latin usage in the commentaries and monographs.

Vogel rightly recognizes the fact that Boethius is dependent on the Greek commentary tradition to the extent that he regards himself as a Latin continuation of the same (166). Ammonius' commentary is by far our most important source for the Greek tradition on the Peri hermeneias, but it has been established that there is little reason to assume that Boethius drew directly on Ammonius' commentary. Of this, Vogel is also well aware (163). The many similarities between Ammonius and Boethius are, hence, particularly interesting because they are probably evidence of a common source (or sources). Vogel frequently refers to Ammonius, but on several important points, he draws conclusions about Boethius' method as a commentator based on features in his commentaries without comparing these particular passages with the Greek commentators. Due to the combined fact that Ammonius is quoted frequently in other instances and that the passages in question are presented as support for conclusions regarding Boethius' own method and overall aim, the reader is easily misled into drawing the conclusion ex silentio that there is no evidence of dependence on the Greek tradition in these cases, and is given the impression that these features may well be Boethius' own contributions to the tradition. For example, Boethius' treatment of equivocation mentioned above is heavily dependent on Aristotle's Sophistici elenchi 165b30ff. and clearly comparable to the parallel passage in Ammonius. [3] Vogel's argument for Boethius' originality is undermined in this notable case, at least. A more careful and systematic comparison with the Greek tradition in this and several other relevant instances would have added welcome nuance to the picture of Boethius' authorship as presented in the book under review.

[2] A. Donato: Boethius' Consolation of Philosophy as a Product of Late Antiquity, London 2013.