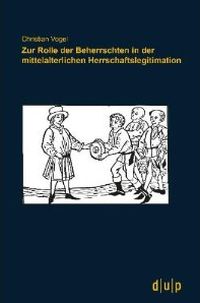 It is fundamental to the political self-reflection of modern Western society that it identifies a deep conceptual caesura separating its own constitutive legitimatory principles of collective self-legislation, representation, and popular sovereignty from the political paradigms underlying early modern or medieval social order. Indeed, a persistent myth at the centre of the canon of constitutional and democratic theory is that the structural underpinnings of modern society were put in place in the constitutional revolutions in England, France and the USA in the seventeenth and eighteenth centuries: these revolutions, it is assumed, marked a deep rupture with previous patterns of political reflection, and it is only in the writings of thinkers located decisively on the later side of this divide that we can trace out the beginnings of more contemporary, secular ideas of commonly acceded public law and constitutional-democratic legitimacy.

Christian Vogel's book sets out an exemplary refutation of such misguided commonplaces. This book provides both an excellent introduction to the political and constitutional theories of medieval Europe and a broad summary of ways in which such theories anticipated and pre-structured the secular political doctrines through which modern democratic institutions ultimately came to explain their legitimacy. At the heart of the analysis is an attempt 'to trace the medieval roots of the various elements of modern democratic theory' (15) and thus to repudiate the view, widely propagated by theorists of the renaissance and the Enlightenment, that medieval Europe did not centrally address questions of constitutional legitimacy or generate significant constitutional doctrines (38). In my opinion, this book achieves these aims admirably, and it can be warmly recommended to all students of the history of political reflection.

The primary strength of the book is that it organizes its inquiry into proto-democratic political thought by attempting to inventorize the different conceptual contexts and vocabularies in which the people - observed as a source of legitimacy, or as a subject of domination - could become politically visible in the Middle Ages. In pursuing this question, Vogel focuses on a variety of discourses, ranging from high philosophy, to early commentaries on Justinian's Digest, to models of municipal and corporate constitutionalism, to debates about resistance and rightful disobedience, to questions of electoral legitimization and the distinct procedural construction of public office. In each case and context, he shows that the people, far from constituting a static or formal object for regal command, were constantly figured as a vital legitimating actor in political discourse. Sometimes a little more contextual detail could be given. For instance, the author could examine how particular ideas of legitimacy evolved against the (in itself locally variable) background of the investiture controversies, or in the context of the longer process in which early national states claimed independence from the Holy Roman Empire. Generally, however, the author's sense of context is very refined, well balanced, and sensitively proportioned to the main analytical objectives of the book. In the early urban constitutions in the Holy Roman Empire and elsewhere, for example, we read that the 'exercise of rights of participation by the people' was well established and legally protected; urban society was typically comprehended as a 'community of free people' (46). The cities, the author adds, were generally modelled on a corporate constitutional design, so that medieval thinkers addressing the role of the people in the governance of the municipalities were clearly 'accustomed to everyday participation in the life of corporations' and so typically endorsed corporate order as the foundation for public authority (220). In larger territorial states, although opportunities for holding elections were logistically restricted, the 'agreement of the people' was also taken as an 'essential characteristic of government (Herrschaft)' (86). In medieval commentaries on Roman civil law, further, we learn that the idea of popular sovereignty was already quite clearly articulated - this claim is exemplified here through reference to the work of Baldus, although other examples could equally well be selected (191). In relation to the vital question concerning the designation of governmental office as a locus of distinctively public authority, the author clearly shows that medieval society attached great importance to the distinction between (private) person and (public) office, and it developed various procedures to ensure that appointment to public offices was subject to public control and scrutiny, so that offices were not easily translatable into private commodities or patrimony (244). The discussion of different techniques for electing qualified persons and administrators to public positions is especially illuminating in this light (255), and it implicitly revises the common assumption that medieval society possessed little in the way of an elaborated system of public law. Overall, Vogel's attempt to construct a broad contextual and discursive terrain for elucidating the presence of the people as political subject in medieval Europe is highly successful. In addition to offering a close analysis of different theoretical positions, it provides something close to an internal reconstruction of the questions likely to be posed within the medieval political imagination.

What becomes clear through these accounts is that medieval political thinking was deeply concerned with questions relating to the popular legitimization of authority, and medieval theorists faced questions not very different from those addressed by more obviously secular theorists writing today. However, the answers to these problems did not converge around one standard template for obtaining popular consent as the basis of government; instead, many different solutions were proposed, each internalizing specific local socio-political conditions. This means that medieval society in Europe produced a range of early democratic doctrines, which, in different ways and to varying degrees, prefigured the more stock contemporary models of democratic legitimacy. Perhaps the most vital insight in Vogel's analysis resides in his simple recognition that the growth of early democratic thinking about legitimacy was necessarily induced by the rise of government as a generically public aggregate of functions and institutions: quite straightforwardly, as more and more people were affected by the transmission of governmental power and as power was constructed as an increasingly abstracted, positively usable and public medium, the people subject to power of necessity 'became more important as basis of legitimacy for government' (307). The more political power society consumed, in other words, the more legitimacy it needed, and the more the people became co-implied in the production of legitimacy. The sociological foundations of this process could be spelled out more clearly here. But the point is of vital importance for our more general understanding of the co-evolution of government, legitimacy and constitutionally ordered democracy in European society.

In proposing these subtle revisions to standard perceptions of medieval political thinking, Vogel is obviously not blind to more authoritarian theoretical lineages in pre-modern Europe. Notably, he draws attention to ways in which papalist ideas of public law, as seen for example in the works of Aegidius Romanus, opted for a construction of natural law that accorded far-reaching self-authorizing power to monarchs (129). Other examples of medieval proto-absolutism are also considered. Generally speaking however, the author is intent (quite rightly) on examining medieval political thought as a trove of anti-authoritarian doctrine, and his research on these questions is very successful indeed.