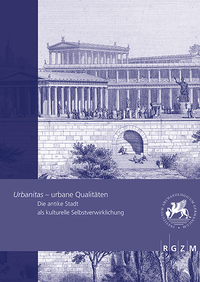 Four German archaeological institutions launched a conference in 2012 the proceedings of which have been brought together in a voluminous and well curated monograph. The work is dedicated to Henner von Hesberg who addressed various of the topics discussed in his research (see the charming dedication of the book instead of a honorific statue as was the use in Antiquity by Werner Eck, p. 63). The editors introduce the theme and give a brief resume of the contributions. It is argued that questions about the attractions of towns nowadays already appear in Antiquity. The urbanitas of the title illustrates this notion, which in this book is to be 'checked' in both ancient written sources and remains of towns. Therefore the interest focuses on 'Annehmlichkeiten' (6), which includes urban commodities and fine urbanistic features like squares and agorai, organisation of public feasts and performances. The contributions cover the area of the traditional Greek Mediterranean as well as the Roman Empire and run from the fifth century BC to late antiquity. There are two sections (I-II), each subdivided into subsections (I.a-b; II.a-c). Rather according to tradition, the work opens with a section on written sources (Ia). H.-J. Schalles assembles texts on quality criteria of urban spaces, partly concentrating on the street structure and water provision and gives a comprehensive, very dense overview. R. Neudecker's essay on the very elegant ecloga 7 of Calpurnius Siculus is narrowed down to an amphitheatre in Rome seen by a 'rustic' shepherd. The practicalities of ludi and other large events are illustrated by Werner Eck, who uses a large amount of epigraphical testimonies. Like Schalles' Eck's contribution is very dense and has a somewhat inventorying character, in which many tantalizing cases could be worked out more extensively.

Section Ib is on 'Savoir vivere' and starts with a thought-provoking contribution on fifth-century BC stoai on the Agora of Athens by M. Langner, which according to the author enhanced the living quality in a not rather clean and well organized town by offering an ideal commodity for public debates and discussion. Socrates is the exemplary user of these hotspots. Similarly, teachers of the Second Sophistic could be heard in the Athenaeum in Rome, found rather recently on Piazza Venezia. The remains are briefly presented by M. Galli who also discusses other places of reunion which made Rome a real Sophistopolis (92) in the 2nd century AD. He is right in comparing this form of imperial euergetism to Hadrian's building programme in Athens (esp. the Library). Sometimes these accommodations also served other scopes, which tallies in with an observation made by C. Berns in his contribution on Aphrodisias' public spaces and their functions. He justly warns for a too limited interpretation of what were in reality multifunctional spaces erected by wealthy citizens or on behalf of the emperor. His example is the 'Portico of Tiberius' in Aphrodisias, the function of which is not clear. It was mainly styled and embellished in the 2nd century and was an 'Ort hoher Erlebnisqualität' thanks to sculptures, architectural adornments, water plays, and green. To his Micro-Asian examples the Theatre of Pompey with its portico and the Templum Pacis in Rome might be added as possible sources of inspiration. Other urban commodities might be benches (P.-A. Kreuz; examples from Italy) and nymphaea (L. Vanderput; examples from Asia). Kreuz points at the function of this category of monuments as references to the act of a flaneur, the elite member of society who casts a benevolent eye of the town's qualities and, as to the benches, takes a seat to reflect upon that. The monumental fountains strengthened the towns' image and displayed their urbanitas (150). In Part II.a the element of 'urban flair' or prestige is exemplified by casus , to begin with a town's honour of becoming a neokoria (W. Raeck), the erection of monumental city walls and public/religious buildings (A. Schäfer: Cologne under Domitian; A. Peña, Flavian Mérida; C. Márquez, Torreparedones) as well as copies of statues from Rome (H. Rose, Victoria from Curia in Metz and Langres). The brief section II.b zooms in on 'urban legends.' A clear case is that of Troy: its walls and sanctuaries were an eternal remembering of Homer's legendary town. Troy expert D. Hertel succeeds in showing this in a lengthy and richly illustrated contribution. This is also true for Aegina and its venerable history fostered over generations by the citizens, even when their own fortune was less favourable. K. Sporn singles out specific aspects: international sport successes, for instance, were commemorated and the athletes were honoured as members of the victorious community rather than as individuals. Urbanitas, however, is less well tangible due to the archaeologically poor remains of habitations (300-301). D. Boschung has written down some thoughts about the relief decoration of public monuments in Rome as bearers of mythic and historic traditions. This essay might have been somewhat longer, especially aiming at a clearer connection with the theme of the section (and the entire conference). The legend aspect does not come to the fore so clearly in A. Prokova's paper on Neapolis, modern Kavalla, where a temple dedicated to a mysterious Parthenos apparently evoked links to the past. Finally, section II.c contains five papers on the city as a paradigm. This is made clear in A. Henning's paper on 4th- and 3rd-century small urban-like nuclei in modern Basilicata (southern Italy): although often small, tens of settlements obtained urban devices like walls, street grids, public buildings, and residential quarters housing the places' elites. These towns - often still rather unknown historically - followed fashions displayed in larger towns like Tarentum. Henning is right in dismissing the traditional definition of this phenomenon as 'urbanizzazione indigena', since it is a depreciation of these centres (337) and their ambitions. E. Laufer illustrates similar urbanization processes in Lycia by analysing the situation at Oinoanda, where larger cities served as examples for the local citizens. I would be curious to know more on the epigraphic habits, rapidly presented, and especially on possible parallels for the famous inscription of the philosopher Diogenes as an expression of euergetism (356). K.S. Freyberger brings the reader to Saccaea (Syria) and its admirably well preserved public and religious building of the Roman imperial era and explains its extreme urban wealth by the analysis of the people, both local and governmental, involved in the realisation of these projects. It's very long history, up to the bishop's seat of the 6thcentury testifies to the long duration of this richness. A longue durée process is also observed in a study on a set of towns in Epirus and Macedonia by M. Burkhardt who focuses on late antiquity and the question of selection and preservation of specific monuments: city walls, agorai/fora, residences, and commodities of games. In the Christian era some monuments changed into churches or were integrated in ecclesiastic complexes, while the urban structure remained more or less unchanged. These towns show how former urbanitas was modified without losing splendour and urban living quality. S. Mägele, finally, discusses the marble remains of six 2nd-century colossal acrolyths, representing Hadrian, the Antonine emperors and their wives, and their changing uses thought the ages in a process of 'De- und Rekontextualisierung' (433). The originally ca 4.70 high figures were found in a bath complex at Sagalassos, where they adorned an ex-apodyterium restructured in the 5th- century, apparently as examples of dynasts relevant in Sagalassos' history. There is a lot of discussion about their first context, but Mägele convincingly argues that they once adorned a temple of the imperial cult that ended its function due to the Theodosian edict of 415. From cult statues they became references to figures of admiration in a culturally elevated location and in this way they continued to stress the town's splendour.

Even if many contributions due to their brevitas thrill the reader's curiosity to know more, while other present results of explorations rather than an analysis, one of the attractions of this set of papers is that they treat so many towns all-over the Mediterranean and present the great variety of ways to enhance a town's prestige. The reader gets instruments to compare Greek and Roman trends, eastern and western fashions, and in some cases specific local practices, all aiming at enhancing the town's and their citizens' prestige and comfort. Modern sensorial studies (which, however, I do not yet see as the ultimate new development for urban studies) might add something to experiencing the measurements taken. It was not always bright and shining marble that made a town, and the accent on monumentality does make us forget that for many citizens all the splendour was no daily commodity. But this sort of aspects may be the topic of a subsequent conference.