Chiara Thumiger: A History of the Mind and Mental Health in Classical Greek Medical Thought 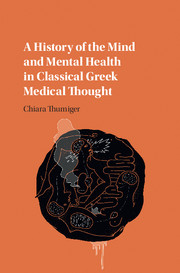 This is an important book that breaks new ground in very many ways. By contrast with most writings on medical views of the mind in Antiquity, which concentrate almost entirely on mental disorders, this book starts from the other end, mental health. It does consider familiar topics such as melancholy (on which Klibansky, Jackson and Pigeaud have all written major works from very different perspectives) and other mental disorders (for which the 2013 volume on Mental Disorders in the Classical Worlds, edited by William V. Harris, provides an excellent starting point), but it goes far beyond what is said there. Equally, despite its title, it includes much material from literary and non-medical sources down to the Hellenistic period and beyond - more could have been said about Rufus and Galen but that would have over-burdened an already long and detailed study. For the moment, the essays in Harris will have to suffice, along with the introductory chapter to Michael W. Dols' 1992 study of madness in the Islamic world, Majnūn. Among older literature, Thumiger rightly praises Johann L. Heiberg's 1927 article on 'Geisteskrankheiten im klassischen Altertum', published in the Allgemeine Zeitschrift für Psychiatrie, and hence almost entirely neglected by classicists.

Her second major innovation is to move away from purely medical classifications (although she is well aware and makes good use of modern debates over definitions and types of mental illness) to a much broader perspective even than that implied in a history of the mind. She inserts her book firmly into the recent debates about emotions, asking how such phenomena were observed and explained. While the focus is largely on medical sources, and particularly the Hippocratic Corpus, there is a constant dialogue between them and literary texts from the same period, whether plays, poetry or philosophy. It is an approach that is both anthropological, attempting to understanding the cultural history of the ancient Greek world, and philological, in its close attention to the words and images that are used to describe various mental states. Thumiger thus avoids the excessive medicalisation of a Rudolf Siegel and the idealistic constructivism of a Foucault.

After an introduction acutely summarising earlier approaches, the rest of the book is divided into five long chapters, with a short summary of its conclusions, perhaps too short given the riches of the book. Each of the long chapters is divided into sections and further subdivided, but the absence in the table of contents of any list of even the first divisions makes consultation difficult, and one has to have constant recourse to the indexes to follow up particular issues.

A striking feature of this presentation is the emphasis on what is termed 'the body of the insane'. From Homer onwards, mental life is described as something visible perceptible from outside, primarily seen through the suffering body of the patient, its disrupted physiology and altered vital functions. The discussion of how these signs are observed and classified is a major contribution to the history of diagnosis, contrasting traditional descriptions in literary texts with an increasingly complex and self-confident level of exploration in fifth and fourth-century medical writings. Given its early date, the account of Ajax's 'madness' in the Aethiopis, frg. 13 West, deserves more attention for its overt acknowledgment of the need to use physical manifestations in the eyes to go behind and reveal something that is not at first visible. Sensory changes play a central role in the diagnosis of mental conditions, including deafness and changes in speech, as well as disordered movement of the limbs. The long third chapter examines the behaviour of the mentally disturbed in relation to everyday functions of life, sleep, food and sex (with important comments on the alleged incapacities of women), as well as self-harming, possibly leading even to death. Equally significant is Thumiger's placing of mental illness within the wider context of emotions such as fear, anger and grief. The richness of description in both medical and non-medical texts is remarkable in its concentration on the experience of the individual, as contrasted, at least in this period, with any investigation into the individual's emotional state and rationality. There is here also a distinction between the so-called Hippocratic texts and representation in more literary writings, whether in history or in plays. While all acknowledge individual character and cognition as part of mental health, medical authors say very little about it. Tragedy in particular stresses the internalised spiritual and ethical dimension of an individual's psychological suffering. More might be said about the idea of latency, pages 60-63, not just in the sense of intermittent periods of insanity (as in the case of a wine-seller recorded by Theophrastus who behaved strangely only at night), but also as an explanation for changes of character over the years.

Thumiger further distinguishes the medical texts from this period from both literary representations and later developments. She shows how medical writers avoided traditional terminology, signalling a discontinuity between 'theory of mind' and 'symptomatology of mental life', and are equally unconcerned with the motifs and themes common in literary texts, love, conflict, punishment and (for obvious reasons) suicide. Nor do they talk of mental illness as a 'disease', despite accepting a continuity between body and mind, or indulge in any ethical evaluation. Individual details of particular cases are rarely given, although this may simply reflect what texts have survived, as well as the idiosyncrasies of the Epidemics. The contrast with the later Hellenistic and Roman periods is still more marked, not only because of Galen, a self-proclaimed specialist in mental conditions and their relationship to physical illness. There is a growing theoretical sophistication, as well as an interest in ethical or philosophical dimensions of mental illness, that deserve further exploration along the lines of this book.

Chiara Thumiger has successfully bridged the gap between those who approach the history of ancient mental illness from medical or from literary sources. Her arguments go far beyond the title of the book into a cultural anthropology of late fifth and fourth-century Greece. It is a major contribution to Hippocratic studies, although she rightly eschews that adjective, as well as raising bigger questions about how illness and emotions were recognised and described. She maps out a variety of new themes for investigation, and sets out the importance of the contribution of ancient medical texts to an understanding of ancient society beyond the merely nosological.