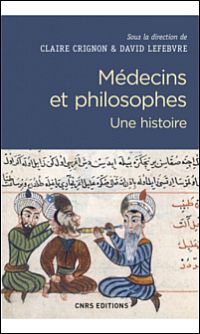 To review adequately a series of essays on themes in medicine and philosophy that range from the fourth century BC (Plato and Hippocrates) to the present (reflections on her career by the doctor-philosopher Anne Marie Moulin) is a near impossible task. It has been made easier by the editors' decision to concentrate on the epistemological relationships between the two, and to avoid medical ethics, a major component in today's courses on philosophy of medicine. Their historical focus also excludes such controversial topics as evidence-based medicine or the impact of genomics. The level of scholarship is high, challengingly so for anyone unfamiliar with developments in continental philosophy. Jaspers and Canguilhem are not familiar names to London medical students. The editors compensate for the absence of medieval Western medical philosophers by introducing some long-forgotten names, Hufeland, the correspondent of Kant, for example, or the fascinating series of normaliens in the first half of the twentieth century who combined philosophy with psychiatry.

These essays can be divided into two. Most deal with the classical tradition from the Greeks down to the seventeenth century in Rodrigo de Castro. Debates about philosophy in and around medicine are heavily dependent on the agenda set by Galen until the late sixteenth century, when the Hippocratic writings became more prominent and remained so at least down to Cabanis in the nineteenth. The questions that exercised doctors also changed because of wider developments in education that gave less space to traditional Aristotelianism. What took its place, from Locke onwards, was psychology, an attempt by doctors, and others, to create a non-religious anthropology that would go beyond a dichotomy of body and soul.

The first article, by Thomas Auffret, begins with a debate between Galen and Alexander of Aphrodisias on the idea of medicine as 'stochastic'. For Alexander medicine's probabilism excludes it from the true sciences, for Galen its basic principles are scientific, even if doctors sometimes fail. This argument is traced back to Ancient Medicine 9,1-3 and to Plato, especially Philebus 55e-57a, Gorgias 500e and the discussions on the three levels of approximation in the Theatetus.

This uncertain status of medicine is also clear in Aristotle, as David Lefebvre shows. While acknowledging the close links between doctors and philosophers, Aristotle also separated their spheres at an epistemological level. But he accepted the fruitful interchange of relevant information between the two in practice, both being based on appropriate understanding, even knowledge, of the material with which they worked.

Pierre Pellegrin argues that both Empiricism and Medicine represent a form of positivism less concerned with causes that with significant indications for appropriate treatment. While this may be true for the Empiricists (whose origins go back to the third century BC), Methodism is more complex, being itself dependent on a system of causation. The link between the two, and especially that of the Methodists with Sceptical philosophy, goes back at least to Ludwig Edelstein, but the proof of this assertion is much harder to find. While Galen tends to view Empiricists favourably, his scorn for the Methodists renders almost all his assertions flawed. His insistence on seeing Methodism as something propounded, if not created by, Thessalus of Laodicea, a century or so after its earliest adherents, and remaining unchanged for further decades, makes analysis of their views complicated. They used the same language as Galen at times, but they were not necessarily trying to answer the same questions.

Galen is the subject of two very different chapters. Véronique Boudon-Millot provides a clear exposition of Galen's claims to be both doctor and philosopher, starting from his assertion that the best doctor is, willy, nilly, also a philosopher. Her introduction is complemented by Ricciardo Chiaradonna's investigation into Galen's lost treatise, On Demonstration, now surviving only in quotations, but which Galen regarded as his greatest contribution to logic and philosophy. He focuses on Galen's understanding of the relationship between language and medical knowledge and on his desire to move from plausibility to certainty. Galen was aware of the limited validity of 'common notions' as well as of the weakness of language to express precisely what had been demonstrated. This was not an argument for scepticism, but rather a plea for caution in interpreting the meaning of words. This treatise attracted so much attention from authors in Arabic and Hebrew that there is every likelihood that a complete translation into Arabic will one day be found.

Galen's demand that the good doctor should also philosophise resonated throughout the medieval world. Many of the great names in medieval medicine were also famous as philosophers, two of whom, al-Rāzī and Averroes, feature here. Those wishing to look for Galen's influence on other thinkers such as Ibn Sīnā and Maimonides can now consult Brill's Companion to Galenism, edited by Boutros-Vallianatos and Zipser, 2019, which also examines the role of philosophy in medical debates in the Latin West from the thirteenth to the sixteenth century.

Pauline Koetschet, in a foretaste of her 2019 edition and translation, discusses three sections in al-Rāzī's Doubts on Galen. In the first Galen was criticised for his agnostic views on the creation and eternity of the world, which al-Rāzī thought incompatible with his belief in a wise creator or Demiurge. And why, if he was so wise, did he make the human body so frail or so ugly? And why too, should a pure and immortal soul choose to reside in such a fragile body? The second series of objections by al-Rāzī focuses on the theory of the four elements, where he develops his belief that Plato's Timaeus advocates a sort of atomism. Finally, he discusses Galen's ideas on mixtures, once again taking issue with Galen's Aristotelianism. Averroes, by contrast, as described by Joel Chandelier, maintained a much stronger Aristotelian line, rejecting on the basis of the replies of female patients Galen's belief in a female as well as a male seed. His overall aim was to subordinate medicine to the greater authority of Aristotelian philosophy.

Debates in the late-medieval West used Averroes, Avicenna and al-Rāzī to present a strongly Aristotelian Galen, not least because university teachers had all been brought up on Aristotelian natural philosophy. They also lacked Latin translations of some of Galen's more Platonising treatises, as well as using versions of On the Use of Parts and On Mixtures that overemphasised Galen's Aristotelian heritage. The arrival at the end of the fifteenth century of Greek manuscripts and, subsequently, new Latin translations sharpened the divide, particularly within the N. Italian universities. Roberto lo Presti describes some of the debates that took place there between 1540 and 1620, particularly over the status of sense perception, with both arts and medical professors claiming superiority for their champion. Valuable though his examples are, it would have been useful to compare the situation North of the Alps to see how widespread this dissension between the disciplines was.

The writings of the Portuguese Jew Rodrigo de Castro (1546-1627), who became an exile in Antwerp and finally in Hamburg, provide a clue to a possible answer. As described by Adelino Cardoso, his 1614 Medicus Politicus set out a comprehensive programme of education for the physician. It is Galenic in the extreme, largely deriving from The best doctor, the treatise discussed earlier by Mme Boudon-Millet. Like Galen, Castro demands that the doctor act rationally to deal with both physical and psychological problems, and defends any medical failure to live up the ideal of geometrically precise reasoning by emphasising that the doctor can only try to follow it as best he can. Amid the uncertainties of practice, approximation to this ideal is the most that can often be achieved.

Cardoso's essay unites the themes of all the previous chapters. The caesura between it and the next chapter, on Locke, is thus all the more patent, and the reasons for it might well have been discussed in the introduction. There are too many gaps for this book to be a history of the relationship between medicine and philosophy, but it makes a good starting point for further investigation.