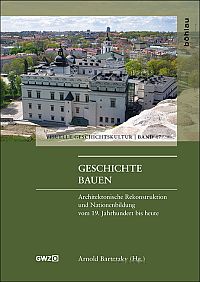 Given the recent Islamic State dynamiting of antiquities, debates about the demolition of US Confederate monuments, and ongoing construction of religious-national edifices across Europe, this multidisciplinary volume's critical examination of Eastern European historic reconstructions offers particularly timely insights. Based upon research undertaken and presented since 2014 at Leipzig's Geisteswissenschaftliches Zentrum Geschichte und Kultur Ostmitteleuropas (GWZO), it compares case studies of "reconstruction", defined as the attempted replication of a destroyed or damaged structure, often at the expense of surviving traces. As such, reconstructions oppose conservation methods as put forth by the 1964 Venice Charter. Scholarship on reconstructions has gained considerable momentum, notably in Winfried Nerdinger's 2010 exhibition at Munich's Technical University, "Geschichte der Rekonstruktion. Konstruktion der Geschichte," which prompted a response against reconstructions the next year. [1] Numerous German works have also praised or critiqued Polish reconstructions. Nonetheless, this is the first collection to compare how East European reconstructions have underpinned nation-building and national mythologies. Although some contributors take positions in ongoing debates, editor Arnold Bartetzky observes, "emphasis is placed, not on praise or polemics, but understanding the motives and processes" (15). In an area as contentious as reconstructions, such scholarly comparison exposes several patterns.

Second, nationalizing regimes eternalize medieval history through "political historicist" reconstructions; in particular, the construction of imperial border posts inscribe national boundaries onto the collective mental map (64). Elisabeth Crettaz-Stürzl illustrates this process in imperial Germany's reconstruction of the Alsatian Hohkönigsburg and West Prussian Marienburg, as does Radu Lupescu in Hungarian plans to reconstruct the Vajdahunyad fortress in what later became Romania.

Finally, national victim narratives often justify campaigns to construct an idealized urban past. As Keya Thakur-Smolarek reveals, claims of victimhood prompted Polish politicians and planners to clear Russian aesthetics amid and after the First World War in favor of what was supposed to be national Polish symbolism. As Piotr Korduba shows, Warsaw's Stalinist-era reconstruction infused an idealized old town with modern amenities and nationally preferred styles. And Tomasz Torbus carries selective memories of a homogenized national past into former German territories annexed to Poland after 1945, where on Wrocław's Rynek, Racibórz's market square, and in the Brzeg and Szczecin palaces a profusion of ahistorical Renaissance encrustations implies stylistic union with the Polish nation.

Perhaps, in the end, some staging of the past is needed for humans to feel at home. Sweeping destruction from total war and modernist bulldozers has typically left the least exceptional residuals. Not just tourists but residents prefer surrounding a run-of-the-mill Renaissance box like Frankfurt's Haus Wertheym (the old town's only surviving half-timbered relic) with fanciful reconstructions of grander ensembles if the alternative is parking lots or shopping malls. Yet the stakes are high when historyless modern cities demand new highlights to selectively remember the past. As Bartetzky observes, "the creation of an ideal image of history that suits the needs of the present" overwrites less usable histories, not least by clearing traces that occupied the same site (26). This volume, appropriate for a multidisciplinary scholarly and student audience, thus provokes larger questions about when the hunger for Heimat compels construction of a usable heritage.