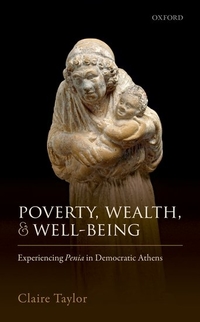 The topic of poverty in the Greek world has witnessed increased interest in recent years, especially after the publication of a number of books concerning the social, political and economic aspects of poverty, [1] literary and linguistic representations [2] and analysis of public discourses. [3] Drawing from the study of poverty in the social sciences, these works showed that poverty cannot be studied merely in economic terms, independent from its cultural and social dimensions.

Taylor's book seeks to further pursue this direction by examining the way in which penia was experienced in Athens (from 420 to 320 BCE). Chapter 1 (1-29) illustrates the methodology, in particular Amartya Sen's capability approach and a focus on the possibilities the poor had in accessing resources and integrating in the community (23-24). Chapter 2 (31-67) discusses ancient assumptions about the poor; it rightly warns the reader against the risk of taking the elitist views expressed by classical authors as an indication of the widespread perception of penia. Chapter 3 (69-113) reviews existing models for measuring poverty and inequality in classical Athens, including a useful appendix on the Ober 2010 and Kron 2011 models (249-51). Chapters 4 and 5 comprise the book's main focus: the duration of poverty and strategies for escaping it (117-28), poverty and gender (133-48), public ways for alleviating poverty at the central level through offices and public pay (151-160) and private structures of support at the local level (161-77). Chapter 6 treats attestations of professional pride (above all, in funerary inscriptions; 202-18) and the visibility of the penetes, for example in dedications that attest to professions and associations (224-5). Chapter 7 (235-47) offers a concise balance sheet on the capabilities of the penetes for achieving quality of life. The overall view is positive: "Being a penes was not a source of shame" (208).

The strongest part of the book is Taylor's discussion of inequality and the ways the penetes dealt with it. The Gini coeficient alone cannot tell us much about the impact of inequality on the life of ordinary Athenians (88-9). We must look at strategies of social integration and possibilities of upward mobility. The weakest aspect, however, is the fact that although the penetes were an internally diverse group - both at the social and economic level - Taylor regards the experience of penia as a homogeneous experience. She rightly raises the issue of gender, but she does not explore penia in relation to civic and non-civic status, or free and unfree labour in a broader context. Did a metic, a slave and an Athenian perceive their activity as, say, ribbon-sellers, in the same way? Euxitheus' words in Demosthenes 57 suggest they would not, and Apollodorus' status anxiety shows that even wealthy naturalised citizens had to face prejudices. Taylor is right in stressing connectivity between status groups. But the idea of the blurring of identities within social relations should not discourage us from weighing the impact of legal status on access to resources. Public pay alone shows that citizens benefitted differently from wealth re-distribution compared to non-citizens. In her discussion of inscriptions attesting to expressions of professional pride (or patronising attitudes towards dependent labour by owners and masters?), Taylor (206-7) notes that the majority (approximately two thirds) belong to metics and slaves, as shown by the ethnics or the attribute chrestos/chreste. Beyond discussion of gendered penia, this information requires approaching the topic by also considering identity and status. [4]

In Taylor's view, the counter-discourse that emerges from inscriptions is at odds with the elitist, mostly negative view of penia promoted by classical authors. This view is only partly true: public discourse is not a monolithic and homogeneous set of beliefs, but rather a diverse universe of conflicting perceptions. In order to understand this universe, we need to differentiate between works that circulated in the restricted circles of intellectuals and philosophers and views of penia contained in works aimed at public venues (the assembly, the courts, the theatre), all of which the penetes attended. The latter contain abundant evidence for positive perceptions of penia, and this fact should warn us from viewing the relationship between discourses and experiences only in terms of dichotomy.

"Eperiencing penia" is a question that requires us to also look at material evidence. Taylor competently discusses archaeological data (see 185-93 for discussion of ergasteria and 130-1 for skeletal material). There is much to learn from this discussion. The reader would have perhaps expected more space be given to religion, namely its role in terms of social inclusion and the performative aspect of poverty in rituals. The function of sacrifices in redistributing resources (above all, meat consumption) is approached briefly (163, 178-9), and the question of ritual begging (minimally addressed, 40-1) remains a desideratum.

A large bibliography, index of sources and general index complete the work. Some previous works, not considered by Taylor, would have enriched discussion: W. Schmitz's 2004 monograph discusses in detail the mechanisms of social integration of ordinary Athenians in the demes based on anthropological research; S. Lape's 2010 book addresses the question of perceptions of labour as intertwined with that of civic and non-civic identity; and D. Kamen brought fresh insights on several status groups of Athens' population. [5]

Apart from some mistakes (see, for example, the use of Greek in "the poor [...] were apragmosyne", 45), the book is carefully edited. It must be commended for launching the challenge of looking beyond the borders of literary representations. This challenge is a welcome contribution to the growing debate on our understanding of poverty in the ancient world, a debate that in future years will need to bring together Greek and Roman historians and scholars of Late Antiquity.

[3] Lucia Cecchet: Poverty in Athenian Public Discourse. From the Eve of the Peloponnesian War to the Rise of Macedonia (= Historia - Einzelschriften; Bd. 239), Stuttgart 2015. See 1-30 for poverty and the social sciences.