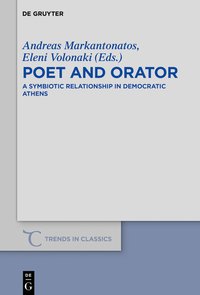 The study of the relationship between poetic practice and (forensic) Attic oratory has attracted considerable attention in recent years. [1] This book, containing the proceedings of a conference held in 2015 at the University of Peloponnese, represents a successful attempt to go beyond the analysis of the seeming common traits of these literary genres, particularly the performative dimension by which both are marked.

The analysis of the 'symbiotic relationship' between poetry and oratory entails two perspectives which, at first sight, have little in common. The first one is the search for the rhetorical strategies adopted by Greek playwrights, the most representative category of poets in Classical Athens. [2] The bibliography of this theme is vast and scattered, so this volume offers a useful collection of relevant cases.

The second involves the study of the use of poetry in Attic speeches, particularly in those few orations in which poetry is expressly quoted or alluded to. This work may not succeed in providing a conclusive 'theory' of poetical references in Attic oratory, as well as of the 'rhetoric of drama'. Yet, the wide thematic spectrum of the contributions gives a rich overview of the ongoing debates and relevant texts. This double perspective is somehow reflected in the research interests of the editors, who have published extensively on narratology of Attic drama (Markantonatos) and the rhetorical and poetical dimension of Attic Oratory (Volonaki).

The volume does not feature an introduction, something which would in fact have been very useful to illustrate the aims of the project, as well as to outline the common features of the contributions, which deal with a wide range of themes both in terms of contents, and of chronology.

The book is divided into four sections of differing length. The first one in particular, 'Rhetoric in Attic Drama', covers nearly half of the book. As the title suggests, the contributions in this section scrutinize the rhetorical forms and strategies found in Attic drama, from 5th century tragedies to New Comedy. The section is characterised by a certain consistency in themes and methodology: all the contributors put emphasis either on the rhetorical devices employed by the poet for the characterization of the dramatic personae, or on the speech-dynamics of the characters within the play's plot. The following two sections, 2. 'Politics, Rhetoric and Poetry' and 3. 'Drama in Attic Oratory' are less explicit in their aims and leitmotivs. The common traits of the chapters can be summarized along these lines: the second section deals with the political and ideological meaning of the quotes and allusions to poetry in Attic Oratory; the third one looks into the stylistic and narratological aspects of those same references. This is particularly visible in the two chapters concerned with poetic quotations: Volonaki's enquiry of the patriotic discourse behind Lycurgus' extensive quotes from poetry (especially Euripides' Erechtheus), and Edwards' formal analysis of the wider phenomenon of poetic quotation in Attic speeches. [3] Since quoting poetry in forensic speeches is possibly the most noticeable example of 'symbiosis' between genres, chapters examining other speeches where we find this practice (e.g. Aeschn. 1, Dem. 18 and 19) would have been beneficial. [4] The fourth section 'Society, Law and Drama' [5], is possibly the most thought-provoking. The chapters here collected show that it is possible, and fruitful, to exploit both dramatic pieces and Attic speeches to shed light on various aspects of Athenian society and political life and institutions. This approach is central, for instance, in Griffith-Williams' analysis of Isaeus' speeches, alongside with New Comedy, which assesses family-relationships in fourth-century Athens; or, in Harris' concluding chapter, where he scrutinizes passages from Aeschylus Eumenides along with several other non-dramatic texts, so as to evaluate the actual status of the Areopagus at the time of Ephialtes' reforms.

One of the book's qualities is that all its contributions put emphasis, more or less explicitly, on how the contamination between dramatic poetry and forensic oratory is to be understood within the specificity of Athens as a socio-political context. At first sight, such conclusions are commonsensical, since both those genres developed within that same specific context. However, the multiplicity of examples offered by the volume introduces a diachronic dimension to the analysis, which allows us also to spot the development of the democratic discourse: from the first half of the fifth century, when judicial elements were brought to the tragic scene in order to set the newly re-organized democracy after the Persian Wars; down to the last decades of the fourth century, when conversely Lycurgus adopted tragic paradigms as a most effective experiment of 'politics of memory' in the lawcourts. This approach is visible not only in the last section (the one most evidently dealing within Athenian social and institutional structures), but throughout the book.

Thus, despite some lack of consistency within the single sections and the absence of some key themes and texts (above all, the preserved speeches of Gorgias), the volume, in aggregate, appears to push an important thesis. The relation between rhetoric and poetry should not be assessed as a mere literary juxtaposition of genres. On the contrary, the rhetorical elements of poetry and the poetical elements in Attic Oratory represent a fertile case of cross-contamination, on aesthetic as well as on ideological grounds. At the end of the volume, the reader is persuaded of the value of rhetoric as an institutionalised, intrinsic factor in determining the features of Athenian democracy as a vehicle of shared values, in the theatre as well as in the lawcourts.

'Poet and Orator. A Symbiotic Relationship in Democratic Athens' is therefore a welcome step forward in the debate: it is a stimulating reading for students and scholars interested in the development and contamination of genres, as well as in the historical reconstruction of the discourses of fifth- and fourth- century Athenian democracy from a literary perspective.

[4] On the quotes in these speeches see Mirko Canevaro: Memory, the Orators and the Public in Fourth Century BC Athens, in: Luca Castagnoli / Paola Ceccarelli (eds.): Greek Memories. Theories and Practices, Cambridge 2019, 136-57.