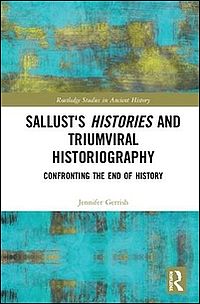 Sallust is coming into his own, at last. There are now easy ways of accessing his work and a larger appreciation of the triumviral period as a distinctive and interesting phase of Roman political and literary history. As Gerrish notes, we have some of Sallust's works effectively complete, there are nearly as many fragments of Sallust as there are of Ennius, subject of no fewer than three excellent recent monographs, and a decent guess can be made as to what we do not have of the rest. Our reticence to treat the Histories in detail is what Gerrish seeks to overcome in this monograph.

The first chapter offers a good overview of triumviral literature, and the way it reflects the uneasy misery of the period. It closes with a reflection on how Sallust might have fitted into this. Did he justify historiography in the Histories? The preface does not survive, but had he in fact become less convinced about history since he wrote the monographs, with their stirring claims to the value of describing the past? It is an interesting question. Gerrish uses Sallust' quotation of a famous fragment of Fannius, to the effect that life teaches us that what we thought was true may not have been so, to suggest that Sallust's whole historical enterprise was intended to open up the problem of the gulf between words and deeds. Life had changed, Sallust had changed, and writing history had to change too.

Gerrish's second chapter starts by suggesting that Sallust's history works analogically. It is about the post-Sullan period, but the reader will keep seeing contemporary allusions. When Spartacus, Crixus and Oenomaus all out, they fall out in the language of Roman triumviral politics (dissidere, consultare). The reader 'sees through' the history; and indeed cannot see the history except through the present anguish. Moreover, Sallust's choice of a 'Thucydidean' language forces the reader to confront the jaggedness of words, the persistent redescription of reality.

Gerrish evokes for the triumviral period a troubled state of mind, a condition of trauma. The Romans' obsessive return to the past, the recurrent presence of Romulus/Remus and the fratricide, the inconsistencies perhaps even in Sallust can be explained by the fact that they had not, and could not yet come to terms with the horror of civil war. One of the loops in which Sallust may have been stuck was with the historian Licinius Macer, who, on the assumption that historian and radical tribune were the same person (far less secure than Gerrish makes it appear), treated the fratricide as a ruthless act. So Sallust puts the 30s into the 70s, Macer overlays the original fratricide and the proscriptions, and Sallust makes the historian appear to live out the lesson of the imbrication of past and present.

Macer is not the only historian in the Histories. That of course means he is not the only unreliable narrator. Sertorius wears his history in the scars of his body, and in his empty eye-socket; Pompey uses praeteritio to justify not telling his story. History can be occluded. But history can also redeem - Gerrish suggests that we have hints of an unusually full story of Spartacus, whose bravery Sallust vindicates.

However, it is through geography that Gerrish makes some of her most telling points about Sallust's critique of Octavian. First, she notes that Sallust manages to refer to Scylla, famously used in self-identification by Sextus Pompeius, in referring to Spartacus's journeys in the south. Elegantly reading the topographical description of Sicily thrusting the tides back against 'soft' Italy as a scene of geographic civil war, she notes that the analogy that the defeat of Spartacus would give power to the unscrupulous Pompey was not a good sign for a future under a victorious Octavian. A rather different point is made by the digression that Sertorius might have fled to the Blessed Isles and thus avoided the necessity for one of Pompey' early commands. Gerrish suggests that this hints at an alternative world - but it is a false hope. The idea that Pompey would have found a way, or someone else would, Gerrish suggests, is also present; in other words, the world was so out of joint that despotism was hard to avoid.

'To spend time with the histories is to perceive viscerally the gut-wrenching frustration with which they were produced' Gerrish concludes (147). The book starts and ends with Arendt, and the importance of truth in fighting the organised lying associated with totalitarian regimes. It is left undecided as to whether Sallust even thought what he was doing could make a difference, but as Gerrish notes, he kept going.

This is a brave reading of this problematic author, and it is beautifully written and fully documented. It is one of the most exciting readings we have of an author who, from a different angle, can look like - to be blunt - a bit of a fraud. Syme's exaltation of Sallust and his largely made up Asinius Pollio somewhat obscure what one might call the lazy cynicism of a disgraced Caesarian, who had fleeced his province. The temptation is to cavil. Many of the attributions of Sallust's fragments remain quite speculative. And did Romans really see Romulus and Remus under every historiographical stone? And was it in fact merely style that made Sallust so popular - the absence of a clear account of why later authors cited Sallust is noticeable.

There is another way perhaps to phrase this that is less obvious, which is to ask how plausible it is that we should read a work of the triumviral period as expressing and indeed living out the intense uncertainty of that period. Gerrish's invocation of allusion, repetition, analogy, trauma, alternative histories offer rich opportunities to read not just this work but others of the period. Noting that the Sallust of the monographs is not necessarily the man who set out to write the worst of times, to face the unthinkable collapse, is one of Gerrish's most effective, if most speculative, moves.

It is of course a book of its time - it is not hard to see its own analogous thinking as a reading of history in a time of lies. However, taken as a whole this is also an effective encouragement to think through the way the Histories might have negotiated the relationship between their subject and their context.

The book is well produced but it is also a book on the brink of the electronic age. Routledge has decided not only to put the notes at the end of each chapter but also a bibliography, as if it were simply a collection of essays. Gerrish's book deserves to be read as a single cumulative argument for its rhetorical force to work.