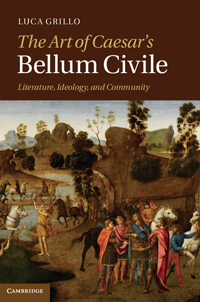 Luca Grillo's book joins a growing number of works which seek to show the artistic qualities and the intellectual ambition of Caesar's war commentaries. An early contributor to this was the collection of essays edited by Kathryn Welch and Anton Powell, Julius Caesar as Artful Reporter: The War Commentaries as Political Instruments (London, 1998), which went beyond previous accounts of Caesar as either mendacious, factual, or surprisingly dull, to reveal that his omissions and concealments, his strategies and tactics, were intended to further the appreciation of his genius and support his political ambitions. Since then, one may pick out A. M. Riggsby, Caesar in Gaul and Rome: War in Words (Texas, 2006) and W. M. Batstone and C. Damon's Caesar's Civil War (Oxford, 2006) in English, and a range of articles in other languages.

What does Grillo have to offer that is new? This is a thoroughly literary reading of the Civil War; Grillo starts by stating that it is 'not a piece of propaganda, but a work of literature.' Grillo argues that we have to read this as the work of an intellectual, and to see style and content as inseparable. The work is then read against a number of key themes, to show that there is a close connection between style, content and intent, and that all support Caesar's linked ambitions as a writer and a leader.

The first theme is celeritas; Caesar is of course famously swift, but his swiftness depended on the quality of his planning. Where planning was weak, as in the cases of Vibullius or Curio, the results are much worse. Grillo claims that Caesar achieves his effects not by direct statement but by characterization, and this is true also of the way that he uses the core Roman virtues to differentiate individuals by implication, and to challenge the reader to follow his implications. He focuses on the virtues of constantia, innocentia, pudor and virtus. Repeatedly, Caesar and his troops display the true meaning of these words, whilst Pompey and his troops fail to; so early in the work, Pompey claims constancy, or has it attributed to him, precisely as he fails to show it. Comparison with the Bellum Gallicum shows part of Caesar's difficulties in the present work; whilst Gauls could show a sort of military virtus, a kind of courage, because there was no political consequence, the Pompeians have to be denied virtus altogether, because however brave they were, they were jeopardising their own state.

Oaths and loyalty are the subject of the next chapter; Grillo argues that the Pompeians always use the language of iusiurandum, which is dubious, but the Caesarians that of sacramentum, which lasts and endures. Pompeian legal language and promises cannot compete, in other words, with the loyalty declared by the Caesarians. The problems of language also affect the way in which Caesar's famous clemency can be understood. Grillo argues that clemency to a foreign enemy and clemency in civil war are different, and the latter is more complex precisely because if civil war is as heinous as it surely is, it should not permit room for clemency, and to do otherwise is to open up the possibility of a claim that the defeated party have suffered some sort of injustice. Caesar's dismissal of Afranius' arguments at the end of Book One is then a denial of the legitimacy for a claim to clemency, whilst at the same time granting it.

One of the areas which has been the focus of much attention has been Caesar as an ethnographer, and Grillo uses this discourse to show that in the Civil War, Caesar constantly compares the Pompeians with barbarians in their treachery, cruelty and luxury - the latter particularly apparent after Pharsalus. Similarly, whilst Caesar has a rhetoric of inclusion, Pompey seems to withdraw; he fails to produce a persuasive image of community, and of course his community is far more dysfunctional than Caesar's.

Grillo finishes his main account with arguments about the structure of the work; the aftermath of the battle of Ilerda, at the end of Book 1, is a high moment of near reconciliation; Curio's defeat at Bagradas at the end of Book 2 shows the merciless and barbaric behaviour of the Pompeians, even if it also shows Curio's weaknesses. The argument is then that the outcome of the work will be a choice between these two possible endings.

There are three appendices; one on the chronology of the civil war and how it maps on to the work; one on composition and publication - Grillo chooses composition during the war in 49 and 48; the third looks at the manuscript tradition to argue that the beginning picks up from the end of the Gallic War, that the book division is original, and that Caesar left the work - for whatever reason - unfinished.

Grillo's book is well-written and careful, and makes a good case for the sophistication of the work, although he pushes his readings harder than some might like. It is easier to follow than Batstone and Damon's work, and largely complementary to it. It forces in the reader a greater degree of care in approaching Caesar's work, and it is a fair point to make that we should not simply use the Civil War for the factual content.

What, one wonders, would a Pompeian response have looked like? This was a period of intense pamphleteering. Pompey had his own historian for some part of his career, and many of his comrades were adept writers. If Caesar's achievement was an insidious blackening of the opposition, did the opposition have a response? What did Livy's Patavinitas make of all this? The summary of Livy Book 111 has a rather different take. The more literary accounts of Caesar's work have so far been taken up with demonstrating - successfully in most cases, and that is true of Grillo's book - that Caesar is worth reading with more attention than has perhaps been done in the past. If he needed to work so hard, perhaps he was up against more than just the difficulty of the case in and of itself, but some determined alternative accounts.