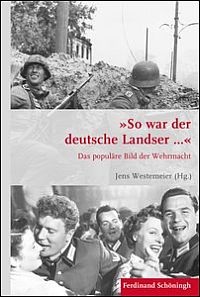 Since 1945, the scholarly debate around the conduct of the Wehrmacht (predominantly the army, but defined here as the armed forces including Kriegsmarine, Luftwaffe and Waffen-SS also) under the 'Third Reich' has undergone profound transformation. The trial for war crimes of former generals at Nuremberg and elsewhere during the early post-war years fuelled a considerable degree of reaction against the German military. But during the 1950s, ex-generals such as Erich von Manstein and Heinz Guderian wrote self-aggrandizing, self-exculpatory memoirs which in the anti-communist atmosphere of the Cold War, and in the absence of wide access to meaningful primary source material, influenced scholarly and public perceptions heavily.

There thus emerged two pernicious myths: firstly that, some high-ranking bad apples aside, the Wehrmacht had fought a clean war; secondly, that it had fought with matchless military proficiency, which its enemies had only overcome through their numerical and material superiority. A fitful but consequential scholarly process lasting from the late 1960s through to the 1980s, fuelled by generational change as well as by new access to sources, exposed the army leadership's culpability in Nazi crimes. The Wehrmachtsausstellung of the 1990s, recalled in the volume by its erstwhile chief historian Hannes Heer, dovetailed with further studies, many benefiting from ongoing generational change and a further bonanza in primary sources following the fall of Soviet communism, to examine culpability and ideological motivation among middle-level units and their men. Since the millennium, scholarship has deepened the overall picture further, albeit with ongoing significant disagreement over the actual extent of ordinary soldiers' culpability. The overall result is an increasingly sophisticated synthesis combining new military history, with its emphasis on social and psychological dimensions, with operational military history. Indeed, one of the most exciting developments of recent years has been a burgeoning scholarship that not only combats the myth of Wehrmacht military excellence, but also, regarding areas such as scorched-earth operations and anti-partisan warfare, illuminates the relationship between the Wehrmacht's military performance and its criminal record.

This outstandingly good book presents the scholarly debate as its backdrop, but its own focus is the causes, forms and consequences of public perceptions of the Wehrmacht. Its eighteen chapters encompass case studies of the popular perceptions of all branches of the Wehrmacht, across a comprehensive range of printed, broadcast, online and other media. One of the many services the book renders is to demonstrate just how out of sync scholarly debates and public perceptions can be, and the importance of the task scholars face in seeking to bridge that gap. A fairly recent example is the 2013 TV drama Unsere Mütter, unsere Väter, which employed the well-worn trope of German soldiers as victims of Nazism rather than perpetrators in its name, and which is convincingly dismantled here by Volker Benkert. But as early as the 1950s, on-screen portrayals of wartime figures could fuel public controversy, as demonstrated in Thomas Riederer's account of contemporary popular and critical responses to the 1958 West German movie "U47 - Kapitänleutnant Prien".

The book also demonstrates how post-war popular perceptions could be influenced, however unknowingly, by wartime Nazi propaganda. The U-boat campaign exemplifies this also, with Daniel Uziel's chapter recounting how Wehrmacht propaganda footage of U-boat action, much of which was actually staged, was utilized unquestioningly in the landmark 1970s British TV documentary series The World at War. But the whitewashing, self-promoting agenda of erstwhile wartime actors was transmitted firstly, and most consequentially, by the aforementioned former generals during the late 1940s and early 1950s. As Esther-Julia Howell details, they transmitted it not just through their memoirs, but also via former army chief of staff Franz Halder's heading up of the team of ex-generals that compiled the US Army Historical Division studies on the German army's experience of fighting in Russia; these studies were consumed by an American military establishment eager for insights into its Cold War enemy. An especially egregious instance of just how distorted the picture can get, considered here in the chapters by Ronald Smelser, Edward J. Davies II and Henning Pieper, is the sugar-coated treatment by some US popular historians of Waffen-SS units that were guilty of particularly heinous crimes.

The reader's insights are further enriched by the book's other dimensions. One-time sacred cows whose popular media treatment is thoroughly dissected include, in the case of the respective contributions of Jörg Füllgrabe and Jens Wehner, the Sixth Army at Stalingrad and Eastern front Luftwaffe ace Erich Hartmann (indeed, the collection's only flaw is the lack of one or two further chapters on Luftwaffe-related topics). Johannes Kramer's examination of the troubled political efforts during the 2000s to present the elite "Brandenburg" Division as a role model for German forces serving in Afghanistan highlights the ethical and political minefield that such endeavours can involve.

An issue the book stresses frequently, and rightly so, is the dangerous potential to feed politically extreme agendas inherent in efforts to gloss over the Wehrmacht's criminal record. But a further admirable quality of the book lies in its recognition that many of those exposed to such apologist gaslighting are not themselves politically extreme. Smelser and Davies, together with Ralf Raths in his examination of popular perceptions of Panzer warfare, appear to recognize that the majority of military enthusiasts who are absorbed by Wehrmacht topics are motivated by genuine, if often narrowly focused, apolitical fascination. The challenge, then, is to engage rather than condemn them, through approaches that are both scholarly and accessible. Such enthusiasts can thus be furnished, and those genuinely sinister forces at work marginalised, with deeper knowledge and understanding of the ideological and criminal context in which the Wehrmacht operated. Raths highlights a successful example of such an approach in the work of the Panzer Museum in Munster.

All the aforementioned chapters, together with those not mentioned here, are excellently researched and written, and Jens Westemeier is to be commended for assembling such a coherent, high-quality, much-needed collection of essays. It deserves wide readership amongst scholars and students, and this reviewer, for one, hopes that it might yet be modified as appropriate and also translated for still wider dissemination.