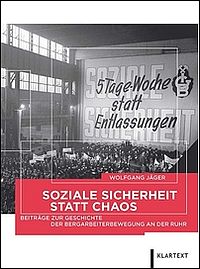 The closure of the last remaining pits in Germany at the end of 2018 generated a good deal of attention for mining history. Amongst the many studies and conferences that were devoted to the theme, this work stands out for its focus on the labor movement. With a specific emphasis on the Ruhr, the country's foremost coal basin, it charts the history of trade union organization in the mining sector from its inception in the wake of the great miner's strike of 1889 right up to the arduous negotiations that accompanied the 'exit from coal' in recent years. As a former director of the Hans-Böckler-Stiftung, the research and training foundation of the German Trade Union Federation, the author is certainly well placed to recount this story. In fact, the volume is in large part made up of slightly modified articles and papers on organized labor in the Ruhr coal basin that he produced over the last decades.

Richly illustrated with photos and figures, the book consists of five parts: the first provides a brief chronology of trade unionism in the coal sector, the second addresses the political attitudes taken by coal miners, the third deals with the question of co-determination in the mines, the fourth discusses trade union resistance to Nazism, and the fifth offers short portraits of the founders of the mining unions. If the structure of the book as a collection of essays inevitably results in some repetition, particularly so in the chapters devoted to the voting behavior of the various social groups or 'milieus' (Catholics, Protestants, rural cottagers, urban dwellers, migrants from Masuria and Silesia etc.) that made up the workforce in the Ruhr coal mines, an overall argument is clearly discernible. The author stresses that the trade union movement in the Ruhr coal basin has much to be proud of: whether it was their prominent role in negotiating the Stinnes-Legien Agreement which recognized trade unions and employers' organizations as equal partners in 1918 or the pressure they brought to bear on the Adenauer government to pass the Coal and Steel Co-Determination Act that gave ordinary workers a direct say in the running of their companies in 1951, the mining unions were pivotal in securing some of the major victories that the German working class won in the twentieth century.

There is a lot to be said for this positive account of industrial relations in the mining sector. The deep-rooted culture of corporatist cooperation certainly made sure that the exit from coal was a far more consensual and gradualist process in Germany than elsewhere in Europe, where pit closures were often accompanied by mass unemployment or violent clashes between miners and the police. It should also be stressed that the book by no means presents an entirely celebratory history of the labor movement in the Ruhr coal mines. In fact, one of its strong points is how it dispenses with several widespread 'myths' about the sense of common purpose amongst ordinary pitmen -it sets out clearly that the much-eulogized workers' councils (Betriebsausschüsse) which took control of the coal mines after the defeat of the Nazi regime were hardly representative of the working class as a whole and that the acceptance and integration of the different nationalities which flocked to the Ruhr encountered more difficulties than the traditional success story of the 'melting pot' suggests.

There remains one myth, however, with which the book could have engaged in a rather more robust manner: the 'myth of labor unity'. [1] The implicit assumption throughout the book seems to be that the fragmentation of the prewar labor movement in various denominational, national, and political unions (Richtungsgewerkschaften) diminished the clout of the working class and that the creation of a unified trade union (Einheitsgewerkschaft) after the Second World War was accordingly a major feat; indeed, miners are praised for having been at the forefront of the struggle to establish this Einheitsgewerkschaft. The notion that 'unity is strength' is of course a maxim of trade unionism everywhere and sounds plausible enough at face value. Yet, the book does not actually offer any evidence that the unified trade union movement in postwar (West) Germany achieved more than either its fragmented interwar predecessor or indeed than its counterparts in countries where the old Richtungsgewerkschaften were re-established after 1945. To be sure, it might be argued that the employers and the government would never have granted co-determination if the trade union movement had not presented a united front, but the author is at pains to point out that postwar co-determination had deep roots in the intra-company democracy of the interwar years. A more thorough analysis of the actual merits of trade union unity, and its main winners and losers, [2] would therefore have improved the book.

This is but a minor gripe, though, with a worthwhile study of the important contribution that the labor movement made to the history of the Ruhr during the age of coal. Its brevity (a mere 200 pages) and accessible nature make it an excellent resource not only for academics but also for a more general public interested in or university courses on trade union history.

[2] I have dealt with the groups that stood to gain and lose from trade union unity, see Jan De Graaf: Strikes as Revolutionary History? Probing the Potential for a Revolution in Post-1945 Europe through Wildcat Strikes, in: Archiv für Sozialgeschichte 59 (2019), 229-251.