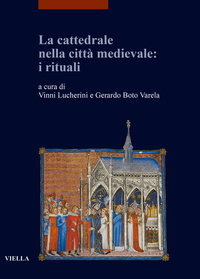 The fifth volume of the collection "Quaderni napoletani di storia dell'arte medievale" from the publisher Viella brings together the papers presented in the city of Naples in January 2019 in the frame of an international workshop. The editors explain in the preface (7-8) how the book is the most recent result of the academic collaboration that has lasted for over a decade between the two Mediterranean universities of Girona and Naples.

In the introduction, Vinni Lucherini (13- 35) defines the historiographic trends relating to the three concepts that limit and define the scope of these papers; namely the cathedral, the city and ritual. He discusses the multiplicity of meanings possessed by these words, offering evidence from his own studies in the Roman and Neapolitan ambits. The book then continues with three distinct sections.

The first section presents six publications that connect cathedrals and cities throughout Europe. They take us to cities with notable differences and in which diverse ritual practices provide evidence of the central importance of the cathedral in medieval life. Bruno Klein (39-46) describes accounts of rituals that occurred at various points between the placing of the first stone of a cathedral and the building's consecration. Guy Lobrichon (47-64) presents the scene to be found in the cities of Sens, Reims and Soissons (11th-13th centuries), which he defines as "hagiopole" because their urban landscapes feature works of art (permanent or occasional signs) linked to rituals and thus manifest the power of their cathedral chapters. The city of Liège (10th-12th centuries) is the focus of the study by Alain Dierkens (64-74), who describes in detail the setting for the city's episcopal funeral ceremonies, which took the form of stations between the collegiate churches and monasteries and the cathedral, thus ensuring that episcopal power was omnipresent throughout the city.

The important article by Fabio Coden (75-113) reconstructs the canonical body during the annual liturgical cycle in Verona, detailing the routes and rituals followed during the Christmas-Easter-Pentecost cycle and the feasts of the saints. César García de Castro (115-137) focuses on the city of Oviedo and the differences between the shrines in the city and their direct links with the episcopal see, and details their funereal and seasonal commemorations and important events such as consecrations and coronations. The cities of Prague and Krakow between the 14th and 16th centuries provide the setting for the study by Du&#353an Zupka (139-156), specifically the ceremonies that took place in their cathedrals, a place that brought together the monarchs of Bohemia and their bishops. His text pays particular attention to the rituals of consecration and coronation.

In the second section, four articles describe the connections between rituals, images and sounds. Using various Constantinopolitan manuscripts with musical notation, Bissera V. Pentcheva (159-179) reconstructs the sensory and aural experience of the festival of the Exaltation of the Cross in the Hagia Sophia, which although it was held in different ambits of the city and in the temple, culminated with the canticles that rose up beneath the dome and then cascaded over the emperor. Cécile Voyer (181-199) recounts the leading role of an illuminated codex of the Gospels from the 13th century in Troyes. It accompanied the bishop on the route that he followed from the exterior to the interior of the city prior to taking possession of his Church, and was taken on the urban procession on Palm Sunday, thus helping to define the ecclesiological space. Rosa Maria Dessì (201-223) presents the documentation and some late medieval panel paintings which, in Sienna, reflect the symbolic transfer from the concept Maiestas/Ecclesia to Maestà/Civitas, and the ceremonial impact resulting from the assimilation of the paintings of the Maestà with the city, similar to the festivities that were organized to celebrate the arrival of the monarchs and their families. Véronique Dominguez (225-244) discusses the iconography present in the choir of the Cathedral of Notre-Dame de Paris (13th-14th centuries) and its impact and influence on the literary formulation of the text Mystère de la Passion by Arnoul Gréban (c. 1450), a story that was widely performed.

The third section offers five studies on the cathedrals of the Crown of Aragon during the Late Middle Ages. Marc Sureda Jubany and Gerardo Boto Varela (247-283) explain the places and rituals of the stational liturgy in the city of Tarragona on Palm Sunday, with the notable presence of a paleo-Christian sarcophagus that features the Entry into Jerusalem. Also in relation to the metropolitan cathedral of Tarragona, Marta Serrano Coll and Esther Lozano López (285-309) describe how the translatio of the relics of Saint Thecla to the city in 1312 was brought about through the combined initiative and interests of the municipal powers, the monarch and the archbishops, thus creating a new nexus between these three entities. The worship of Saint Eulalia at the Cathedral of Barcelona is analysed by Francesca Español (311-329), who focuses on both the crypt and the sepulchre and on civic worship, which led to the saint being identified with the city and to which can be added accounts of courtly piety. Amadeo Serra Desfilis (353-373) explains the fa&#231ades of the Cathedral of Valencia and its singular ornamental programme as the focal point for specific ceremonies throughout the liturgical year involving various institutions and representatives of the city's government. Finally, Flocel Sabat&#233; (331-352) describes how the cathedrals and cities of the Crown of Aragon acted in the context of royal funereal ceremonies, in a dynamic that laid bare the tensions between the ecclesiastical authorities, the municipal leaders and the monarchs.</p> <p>These studies provide a great deal of evidence regarding the ritual variety to be found among cathedrals, cities and works of art during the medieval period. The book offers accounts of liturgical and civic rituals led by various social classes, elements of urban power and monarchs. All of the contributions, through their varied multidisciplinary approaches, put in motion people and works of art on urban itineraries and in the heart of the cathedrals, recreate settings and actions, revive the sounds of the rituals, canticles and performative activities, and provide evidence of notable differences between medieval cities that are in line with their historical singularities. What is clear is that this area of medieval art constitutes an important area of academic enquiry, an area to which this book provides an entry point for all researchers interested in studying the bonds between cathedrals and cities during the medieval period.</p> <p class="italic" style="text-align: right">Isabel Escandell Proust</p> </div> </div> </div> <div id="page_footer"> <div class="ie6_font_size" id="separator"></div> <p>issn 1618-6168 / www.sehepunkte.de <img height="10" src="/images/sp10.jpg" width="10"> </p> </div> </div> </body> </html>