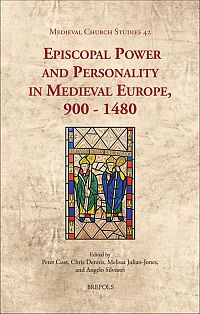 The 42nd volume in publisher Brepols's Medieval Church Studies is a collection bringing together contributions that stem from the debate started in 2015 under the framework of the international symposium organized at Cardiff University, "Power of the Bishop in Western Europe 1000-1300: Episcopal Personalities." Incidentally, the editors of the book have academic ties to this Welsh university.

In the introductory text, Melissa Julian-Jones, Chris Dennis, and Angelo Silvestri (1-17) make an argument for the considerable relevance of the occasions in which we can get to know the personalities and charismas of medieval prelates. Some facets of these two notions were addressed in the previous volume, titled Episcopal Power and Local Society, published in the same collection, but which offers contributions from other perspectives, for example, social, cultural, artistic, political, hagiographical, and theological.

In the first section of the book under consideration, "Constructing Medieval Personalities," five studies are presented that lay out the variety of mediums that bear witness to the evolution of the episcopal personality. A wide range of intellectuals and well-known figures are referred to in numerous medieval texts, and some prelates even left their mark on the liturgy and the promotion of the arts. Andrea Vanina Neyra (21-33) analyzes the actions and negative personality of archbishop Giselher (971-81), who is described in the Thietmar of Merseburg's Chronicle (975-1018) as a mercenary who prioritizes his ambitious career over the wellbeing of his church. Radosław Kotecki and Jacek Maciejewski (35-61) study three chronicles from 12th-century Poland in which bishops work to bring peace to political strife and participate in armed conflict, in general, providing their spiritual support, despite the active participation of some.

Antonio Antonetti (63-81) focuses his attention on personality in political governance in the area of Southern Italy during the high Middle Ages, with the episcopate of William II of Troia (since 1106) being the subject of his analysis. He explains how this figure changed the political history of his community by implementing his own political and cultural projects. Christine Axen (83-100) considers the education, academic reputation, and intellectual legacy of bishop Zoen Tencarari of Avignon (r. 1241-1261). Legal texts and a papal letter, in addition to the desires expressed in his will, provide a glimpse of his personality traits. Mercedes López-Mayán (101-118) continues with an analysis of the construction of the cultural personality of the archbishop of Toledo, Alfonso Carrillo de Acuña (1446-1482), who commissioned twelve luxurious illuminated liturgical manuscripts. The visuals and ornamental design of his two pontificals are the result of his personal preferences, cultural interests, and ideological aspirations.

The second section, "Consecrating Episcopal Personalities," includes four contributions covering bishops who would become saints, others who contributed to processes of canonization, others who opposed them, and still others who theorized about and defended complex theological concepts and contributed to the composing of theological texts. Mónica Belucz (121-139) reconstructs the life of Saint Gerard of Csanád (977-1046), discussing the values of his monastic life, his missionary work, his episcopacy, and his position as a martyr and saint of the Hungarian Kingdom. Jack P. Cunningham (141-158) analyzes the personality of Robert Grosseteste, Bishop of Lincoln (1235-1253), a scholar admired for his acumen and methodology, but censored for his approach to episcopal duties. Cunningham discusses this apparent dichotomy and argues that an understanding of Grosseteste's work as a bishop should stem from his theological convictions.

Ian L. Bass (159-179) describes two episcopal models of bishop-saints in England: Thomas Becket, Archbishop of Canterbury (1162-1170), who exhibited saintly qualities throughout his life while fighting against the king for the libertas ecclesiae, and Thomas of Cantilupe, Bishop of Hereford (1275-1282), who met the expectations of both the laity and clergy, and is the model of spiritual perfection for English bishops. Sara Ellis Nilsson (181-199), in the context of Scandinavia, analyzes the non-saintly bishops referred to in medieval hagiographical and historiographical texts, providing a new point of view on how bishops' personalities were projected in the creation of saints.

In the third section, "Politics and Episcopal Personalities," there are five studies on the prelates' actions, which varied with respect to their own peculiarities and interests. Sam Janssens (203-222) explains the introduction and development of the Peace of God in the archdiocese of Reims in the first half of the 11th century. In fact, he argues that the Counts of Flanders and bishops of Reims alternated among themselves the privilege of initiating a Peace Assembly. Brian A. Pavlac (223-243) discusses how the heroic personality and force of character of bishop Albero of Trier (1131-1152) was the foundation of his territorial power.

Andrew D. Buck (245-263) discusses the Chronicon of Archbishop William of Tyre (1170s-1180s), analyzing how his personal views and motives had an influence on the ways he presented his history. Kyle C. Lincoln (265-284) considers the actions taken by the bishops of Cuenca, Osma, and Sigüenza (Castile) at the end of the 12th century under the problematic framework of the cathedral chapter reforms, noting their personal interest in the reform of their chapters. Finally, Paul Webster (285-303) discusses the reputations of and consequences brought about by the bishops associated with King John of England (1199-1216).

These researchers provide a myriad of evidence on the wide range of diverse personalities among medieval bishops. They provide testimony from individuals with notably different backgrounds, interests, and behaviors. The personality and charisma of medieval prelates was the driving force behind their initiatives. Art historians should pay heed to this pioneering area of activity and explore the opportunities that it has to offer. This book is the result of a meaning field of study in medieval history, one that must be further explored in order for it to reach its full potential. The work represents a fundamental starting point for all researchers interested in addressing the relevance of medieval prelates' personalities and their impact on the events that the prelates experienced.