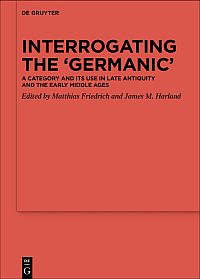 The word 'Germanic': even today it still conjures up images of vast, untamed forests and the equally untamed people who inhabited them. It also informs how many visualize the 'barbarians' who supposedly brought about the ruin of the Western Roman Empire: tall, muscular, blonde-haired, blue-eyed, fur-clad savages. Since the second half of the twentieth century, most scholarship has moved beyond such simplistic ideas, along with the equally simplistic dichotomy of civilized Romans vs. savage 'barbarians', and - for the most part - the idea of the fall of Rome has been replaced by the transformation of the Roman world. [1]

Yet, as Michael Kulikowski points out in his contribution to the volume under review ('The Marriage of Philology and Race', 19-30), some scholars have not yet shed their uncritical reliance on terms like 'Germanic' and 'barbarian'. Indeed, this is not just a case of scholars unthinkingly continuing to use outdated approaches; there are now revanchist scholars actively attempting to revive old-fashioned attitudes (25-26). Of the latter, Kulikowski singles out Peter Heather, calling attention to his use of the troubling phrases 'unassimilated barbarians' and 'immigrant violence' [2], but one could easily add others to the list. We are clearly still living in the shadow of Tacitus's 'most dangerous book'. [3] Interrogating the 'Germanic' seeks to address this problem.

The contributions to the volume can be divided into four broad themes: the issues involved in studying the 'Germanic'; late antique and early medieval understandings of the term; early modern uses of the term; and linguistic assessments of the viability of the term. There is, of course, overlap, and few of the contributions focus on one of these themes alone. While the themes do not form a rigid structure for the book, which is not divided into sections, for the purpose of this review I focus on contributions which are illustrative of each of the four themes. This is not a criticism of those not selected, all of which are first-rate scholarship.

Two introductory chapters are worth mentioning first. Roland Steinacher ('Rome and Its Created Northerners', 31-66) and Stefan Donecker ('Re-inventing the 'Germanic' in the Early Modern Era', 67-88) provide excellent surveys of the two historical periods that saw the most crucial developments of the concept of the 'Germanic'. These are probably the most accessible contributions in the volume, and should become standard texts for those interested in these developments. Steinacher demonstrates that the Roman creation of the Germani only ever had a limited usage, and the term remained vaguely defined in the early Middle Ages. Donecker, meanwhile, examines how early modern authors wrestled with what they found in Tacitus in order to delineate the 'Germanic' for a new audience.

In 'What Can Cultural Anthropology Do for Medievalists?' (111-125), Otávio Luiz Vieira Pinto expands the critique of the 'Germanic' to question how medievalists have dealt with the concept of ethnicity, and is blunt but fair in saying that this has generally been 'reckless', with 'a lack of rigour' (112). Drawing on neomarxist ethnography, he calls upon scholars of late Antiquity and the early Middle Ages to utilize cultural anthropology in order to define what ethnicity is, rather than just taking a definition for granted. Crucially, Vieira Pinto points out that ethnic labels are created by hegemonic systems, and we must take this into account when attempting to study ethnicity.

James Harland ('A habitus barbarus in sub-Roman Britain?', 167-188) and Steve Walker ('A Farewell to Arms', 189-210) explore the archaeological evidence for 'Germanic' identity in fifth-century Britain and find it wanting. Both argue that, whether in cremation burials (Harland) or furnished burials (Walker), we cannot presuppose the self-identification of the buried (or buriers) based on whether the burials appear to be 'Germanic' or Roman to the modern archaeologist. The Roman world was in flux at this time, a flux that extended beyond the political sphere to the very culture of the Empire, especially in the West. Styles of dress, armament and burial were changing, but not necessarily because the populations of Roman provinces were becoming 'Germanic', as has often been supposed.

In 'From Rhetoric to Dialectic' (127-43), Michael Kelly presents a case study of how an early medieval text - the Visigothic Liber Iudiciorum - came to be considered 'Germanic'. Kelly expertly traces the early modern history and political context of this text, from Pierre Pithou's 1579 edition through to the 1738 Heineccii and Georgisch edition. For Kelly, the publication of Friedrich Lindenbrog's 1613 edition marks the turning point in the modern perception of the LI. Unlike Pithou, who presented the LI alongside texts about the history of the Goths, Lindenbrog edited the text with other 'Germanic' law codes, which became the favoured approach in later centuries. Kelly shows us that the modern perception of the Visigoths as 'Germanic' was not inevitable.

Finally, Nelson Goering summarizes the issues surrounding 'Germanic' as a linguistic category - the most secure application of the term - in his survey of alliterative verse ('(Proto-)Germanic Alliterative Verse', 241-249). Goering points out that, while alliterative verse exists in other languages, the kind of verse produced in Germanic languages has to be in those languages because they share the features necessary to produce them. This may seem like a tautology. Goering's argument, though, is that legendary 'Germanic' heroes did not recur in literature across a wide geographical and chronological space due to a shared cultural memory. They recur almost exclusively in alliterative verse written in Germanic languages rather than the other language groups of Western and Central Europe precisely because they were transmitted most easily between speakers of mutually intelligible languages.

As the copious footnotes and chapter bibliographies suggest, this volume is far from the first to question the utility of the idea of a pan-'Germanic' culture. However, it is the first (to my knowledge) to act explicitly as a clarion call for all those who deal with the European past to think more carefully about the appropriateness of the term 'Germanic'.

Labels are necessary to discuss the past. They remain situational, and may occasionally be anachronistic. Scholars may borrow terms from other fields and apply them in different contexts. As Cătălin Ţăranu argues has happened with 'Germanic' ('The Balloon That Wouldn't Burst', 89-110), this runs the risk of a term having so much meaning as to ultimately have none. Yet it is difficult to see how we proceed without labels for what we discuss. So long as they are used with precision and clearly defined by the user, there is no need to reject such labels as 'Germanic', 'barbarian' or 'ethnicity' out of hand. Instead, we should use them to examine how authors and their audiences, whether modern or pre-modern, understood the world around them.

Interrogating the 'Germanic' provides a starting point. It is not comprehensive, and does not offer a definitive answer as to what we should do with the term 'Germanic'. It is, however, one of the most important volumes published in the twenty-first century and should be read by all scholars working on the European early Middle Ages. It will, hopefully, lead to more careful enquiries into the past.

[2] Peter Heather: Empires and Barbarians. The Fall of Rome and Birth of Europe, Oxford / Basingstoke 2010.

[3] Christopher B. Krebs: A Most Dangerous Book: Tacitus's Germania from the Roman Empire to the Third Reich, London 2011.