Matthias Friedrich / James M. Harland (eds.): Interrogating the 'Germanic'. A Category and its Use in Late Antiquity and the Early Middle Ages, Berlin: de Gruyter 2020 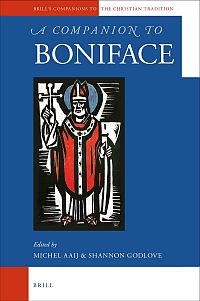 Saint Boniface looms large in studies of the eighth century. His multi-faceted career makes him a figure of interest for historians of mission, the episcopacy, monastic foundations, and the church reforms that preceded and accompanied the so-called Carolingian Renaissance. Not only did his career touch on most of the religious issues of his day, the work of his disciples means modern scholars have access to a good number of primary sources, which shed light on the saint's life and afterlife. The most important of these sources are, of course, the collection of letters associated with the saint - substantial by early medieval standards, if by no means complete - and the Vita Bonifatii composed by Willibald no more than fifteen years after the saint's death. These sources are not without their historiographical problems, but they allow scholars vital insights into the mind of the man himself and those who sought to determine the nature of his commemoration.

Yet, despite Boniface's importance during his lifetime and afterwards, dedicated book-length Anglophone studies of the saint remain few. There has not been an Anglophone biography of Boniface written since the 1950s [1], and even this is overshadowed by Theodor Schieffer's more authoritative contemporary biography in German. [2] Similarly, the last Anglophone edited volume dedicated exclusively to Boniface was published in 1980. [3] More recently, 2010 saw the publication of John-Henry Clay's extensive and detailed examination of Boniface's work in Hessia, but as important as this study was, it only focussed on one particular part of the saint's career. [4]

Brill's Companion to Boniface is, therefore, a welcome publication. The volume does a wonderful job of covering the groundwork for newcomers to the saint's world, but also provides in-depth studies of particular aspects of his career and commemoration, and forward-thinking new scholarship on hitherto under explored topics. Unfortunately, it is not possible to review every chapter of the volume in this review, and omission should not be seen as criticism: every chapter deserves to be read.

Following an Introduction by the editors, the volume is divided into four sections. Section One, "Contexts" (7-96), contains chapters providing broad overviews of Boniface's career and background. Section Two, "Written Sources" (97-247), contains chapters on the texts written by Boniface and those in his circle, and the Lives produced after his death. Section Three, "Spheres of Activity" (248-354), covers the geographical areas of Boniface's continental career in more detail. Finally, Section Four, "Veneration and Afterlife" (355-471), contains two chapters each on the medieval and modern veneration of Boniface as a saint.

While these sections stand somewhat independently, there is overlap between them, as should be expected of such a tightly focussed collection of essays. For example, those seeking to complement the general overview provided by Rudolf Schieffer ("Boniface: His Life and Work", 9-26) will be well-served by the four contributions in Section Three (Michael Edward Moore on Francia, 249-269; John-Henry Clay on Hessia and Thuringia, 270-298; Leanne Good on Bavaria, 299-326; and Marco Mostert on Frisia, 327-354).

One theme that recurs throughout the volume is the importance of networks to Boniface, not just during life, but also in the organization his veneration. This is perhaps not surprizing, but the importance of the massive support networks behind the prominent men and women of history is often neglected.

Networks are dealt with explicitly in two excellent chapters in Section One. In his contribution, "Boniface's Missionary Circles and Networks" (46-67), James Palmer goes beyond the conventional narrative of Boniface's career to examine how the saint was able to achieve so much over a wide geographical range. Particularly interesting here is that Palmer explores the saint's networks in four-dimensional terms: horizontally and vertically across social boundaries; spatially across the Frankish empire and Insular kingdoms; and chronologically through preceding and succeeding networks that paved the way for and continued Boniface's work. By shifting focus from Boniface to those he worked with and through, we can see more clearly a man firmly integrated into the world around him. Boniface may sometimes appear an outsider - an image he helped to create - but in fact he was part of multiple, sometimes overlapping cultural and social networks which stretched through space and time.

Felice Lifshitz, in her chapter "Women in the Anglo-Saxon Missionary Circles" (68-96), addresses the sorely understudied topic of female involvement in missionary activity. This essay provides a much-needed correction to the often male-dominated traditional narrative. Lifshitz does far more than simply list Boniface's female contacts and what can or cannot be known about them. Instead, she examines the roles women played in furthering Boniface's cause. This takes the form of a detailed study of scriptoria, manuscripts and liturgy associated with women and female religious communities in Boniface's circles. Lifshitz demonstrates that women were involved in spreading the written word in the mission fields, and also - perhaps more importantly - in shaping the forms that written and pictorial expressions of Christianity took in the eighth century. Unfortunately, we somewhat lose sight of Boniface himself in scope of the chapter; perhaps more could have been said about how involved the saint was with these communities.

Even a volume as comprehensive as this one will have lacunae and omissions. The editors highlight some of the omissions themselves in their introduction (6): the use of Boniface by American Catholics and his invocation by German and British missionaries in Africa. To these examples could be added studies of the Lives written about Boniface's disciples, which are important for understanding the saint's legacy.

Similarly, it is unfortunate that, while a chapter is dedicated to Willibald's Vita Bonifatii (152-173), the later Lives are combined into a single chapter (174-200). Shannon Godlove - the author of both chapters - is to be congratulated for the clarity with which she summarizes these sources. For all that they are often derivative and spurious, though, the later Lives deserve more attention. The question of why new or updated versions of saints' Lives were written, and the contexts in which this was done, can tell us a great deal about the ongoing importance of past saints. The fact that the later Lives are only available in Latin editions presents a slight obstacle to further study, so while Godlove's summaries blow some of the dust off, they also call for translations of these obscure windows into Boniface's afterlife.

A further lacuna emerges in the section on the veneration of Boniface. Petra Kehl's overview, "The Veneration of Boniface in the Middle Ages" (357-378), contains little information about the cult after 1000, while Janneke Raaijmakers's contribution on Fulda (379-403) is explicitly about early medieval veneration. The other two chapters in the section, meanwhile, focus on the nineteenth and twentieth centuries (Siegfried Weichlein on Boniface as a political saint in Germany, 404-427; Michel Aaij on popular veneration and images, 428-471). These four chapters introduce their subjects well, but the reader may be left wondering what happened to Boniface's cult in the intervening centuries, especially in the Holy Roman Empire during the formative period of the Reformation.

Highlighting such lacunae amounts to little criticism. The editors have brought together the foremost scholars on Boniface, his world, and his afterlife. In doing so they have produced what will no doubt remain the fundamental volume on the saint for some time to come, for both undergraduates and experienced scholars alike.

[3] Timothy Reuter: The Greatest Englishman: Essays on St Boniface and the Church at Crediton, Exeter 1980.