Melvyn P. Leffler: For the Soul of Mankind. The United States, the Soviet Union, and the Cold War, New York: Hill and Wang 2007

James W. Pardew: Peacemakers. American Leadership and the End of Genocide in the Balkans, University Press of Kentucky 2018

Angela Romano: From Détente in Europe to European Détente. How the West Shaped the Helsinki CSCE, Bruxelles [u.a.]: Peter Lang 2009 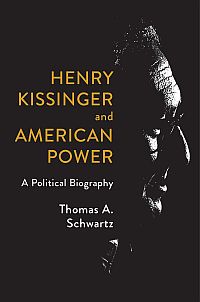 Thomas Schwartz's Kissinger biography is a major contribution to the historical literature and a tremendous achievement. Schwartz has a keen ability to see the many different facets of Kissinger - as a negotiator, policymaker, public celebrity, presidential adviser and skilled bureaucratic operator. The book recognizes the "polytropos" (12) in Kissinger, exploring his many sides and contradictions as a key historical figure and taking his statecraft and his life as a prism through which to explore U.S. foreign policy. Throughout the book, Schwartz manages to take a balanced view and write dispassionately about Kissinger. "The extreme praise and vilification Kissinger receives does little to provide a real understanding of the historical role he has played, or the consequences and legacy of his public life and career" (5).

Kissinger's pre-Nixon Administration career is analyzed in one single introductory chapter. Schwartz does not aim to repeat what other biographers such as Niall Ferguson have covered based on exclusive access to Kissinger's private papers. That leaves more room to study Kissinger's statecraft during the Nixon and Ford years, starting with a detailed analysis of the difficulties at the outset of Kissinger's tenure as National Security Adviser against the backdrop of the failed attempts to bring an end to the Vietnam War. Chapters 3, 4 and 5 present a perceptive examination of Kissinger's trilateral diplomacy toward China and the Soviet Union, including his facilitation of the 1972 Moscow Summit and the Paris Peace Accords with Vietnam.

The second half of the book investigates Kissinger's tenure as Secretary of State, when he was perhaps the most powerful figure in Washington, in the context of the Watergate scandal and Richard Nixon's resignation. Chapter 6 depicts Kissinger's role in the Ford Administration and the decline of his influence, a period when he was faced with powerful bureaucratic competitors such as Secretary of Defense Donald Rumsfeld and Ford's Chief of Staff Richard Cheney. Both criticized the shortcomings of Kissinger's détente policy, such as the escalation of the Global Cold War and the extension of the Soviet Union's influence in Africa. Chapter 7 looks into the 45 years since Kissinger left office in January 1977, detailing his efforts to remain influential throughout the years - ever since, every president has sought Kissinger's advice and his counsel on foreign policy. The chapter is almost a book in its own right, pointing to a multitude of avenues for further research on Kissinger's role as "shadow Secretary of State" (7) and his impact as a foreign policy commentator.

The book greatly benefits from Schwartz's immense capability to contextualize and to capture the contingencies of events. In chapter 2, for instance, Schwartz compares Nixon's Vietnam approach with Eisenhower's Korea policy, arguing that "Nixon believed that Eisenhower had implicitly threatened the Soviets that he would use all means to end the Korea War, including nuclear weapons. Like Eisenhower, Nixon hoped that a combination of secret diplomacy with the Russians and promises of an arms control deal and a settlement in the Middle East, coupled with the threats of more forceful military action against North Vietnam, would yield an 'honorable peace' that afforded South Vietnam a 'reasonable' chance to survive" (70). The book is full of such valuable comparisons and flashbacks, helping readers to understand the motives of Nixon's and Kissinger's policy. With balance and perspective, Schwartz untangles the many threads that Kissinger weaved together in an effort to establish a new architecture for U.S. foreign policy.

One of the most interesting aspects of the book pertains to Schwartz's analysis of the Nixon-Kissinger relationship. Based on the Nixon White House tapes and Kissinger's telephone conversation transcripts, Schwartz depicts Nixon's antisemitism and his insults to Kissinger. For instance, while congratulating Kissinger for winning the Nobel Peace Prize in 1973, something that Nixon deeply resented, Nixon suddenly mentioned the award money, saying "I would not put in any for Israel". As Schwartz pointed out, "Kissinger dutifully responded to Nixon's not-so-veiled anti-semitism with 'Absolutely not. That would be out of the question. I never give to Israel'" (237). Schwartz's book gives a meticulous portrait of Nixon and Kissinger as an "odd couple of American politics" (61) - Nixon, the Quaker son who resented the Eastern establishment and Ivy League intellectuals; and Kissinger, the Harvard professor who embodied so many of the traits that Nixon hated. Schwartz is right in pointing out that "their own love of intrigue and power" brought them together. As Schwartz put it, "it was Kissinger who tuned into Nixon's frequency, becoming more like him in some ways, but able to understand, anticipate, and, most important, manipulate Nixon better than many who had known him for years" (63).

With his first visible policy successes, such as the opening to China, the Berlin Quadripartite Agreement in 1971 and the conclusion of the SALT and ABM Treaties at the Moscow Summit in the summer of 1972, Kissinger's importance in the Nixon Administration grew. Kissinger turned into "the secret agent" (chapter 3, 119 ff.) of Nixon's foreign policy, pursuing backchannel diplomacy toward the Soviet Union and China while the State Department was largely kept out of the decision-making process. Nevertheless, there was still mistrust between Nixon and Kissinger. Daniel Ellsberg, the major force behind the release of the Pentagon papers in 1971, had been Kissinger's student at Harvard. This made Kissinger vulnerable to Nixon's prejudices. Kissinger distanced himself from Ellsberg, pointing out that he was "the most dangerous man in America today [...] who must be stopped at all costs" (137).

At the outset of Nixon's second term, his relationship with Kissinger underwent further changes. While Nixon received tremendous public criticism for his Vietnam bombings on Christmas 1972, Kissinger was praised for his pivotal role in the conclusion of the Vietnam Peace Accords. After his appointment as Secretary of State in September 1973, Kissinger kept his position as National Security Advisor, which was without precedent in U.S. history. In this dual capacity, at a time when the Watergate scandal further weakened Nixon's position, Kissinger managed to force the Soviets out of the Middle East in the aftermath of the Yom Kippur War in 1973. Turning to 1974, Schwartz vividly describes how Nixon informed Kissinger about his forthcoming resignation, asking Kissinger to kneel and pray with him. While Kissinger tried to console Nixon at the White House, he told a different story to Bob Woodward and Carl Bernstein for their prize-winning book The Final Days: He "didn't really like the president. Nixon had made him the most admired man in the country, yet the Secretary couldn't bring himself to feel affection for his patron" (266-267).

Initially, during the Ford Administration, Kissinger remained at the heart of the foreign policy decision-making process. Over time, however, Kissinger lost a certain share of his access to the White House, particularly when Ford's cabinet was restructured in November 1975 and Kissinger was forced to abandon his position as National Security Adviser. The U.S. public was increasingly opposed to Kissinger's détente policy, especially once the Vietcong had conquered all of South Vietnam and the last U.S. soldiers were evacuated from Saigon. In 1976, Kissinger was unable to obtain a deal with the Soviet Union on a second strategic arms control agreement (SALT II). Moreover, there was powerful opposition from within the Republican Party: Governor Ronald Reagan of California, who challenged Ford in the 1976 primaries, blasted Kissinger. Ford's defeat ended Kissinger's career as Secretary of State. "Few would have predicted then that he would never return to the U.S. government in an official capacity shaping foreign policy. However, few also would have imagined that he would continue to exercise influence over foreign policy for the next four decades" (345).

How Kissinger retained influence is shown in the last chapter: "Within the first months of his departure from office, he secured a $5 million contract for his memoirs, a five-year deal with NBC to provide commentary, and a professorship at Georgetown University. Along with these deals went consultant arrangements with Chase Manhattan and Goldman Sachs, the beginning of what eventually would become his own international consulting firm a few years later" (350). Kissinger anticipated that neither Reagan nor Bush would offer him a position - there was always a danger that he could overshadow the President. In the late 1980s, Kissinger doubted the wisdom of the rapprochement with the Soviet Union of Gorbachev. Kissinger's opposition to Reagan's policy even led to a revival of the Nixon-Kissinger team. Both criticized the 1987 INF Treaty and both came out strongly against Reagan and Gorbachev's joint vision for a world without nuclear weapons. As an elder statesman and adviser, Kissinger remained a media icon. In 1999, he finalized the third and concluding volume of his memoirs, Years of Renewal, in which he reassured himself (quoting Churchill) that that "history will be kind to me for I intend to write it" (391).

This is a superb biographical study, highly readable and ideal for the general reader and scholars alike.