Petra Goedde: The Politics of Peace 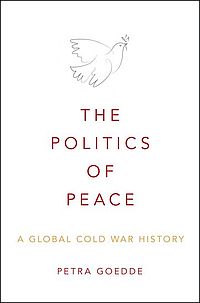 We have recently seen a remarkable flowering of scholarship on the Cold War in the Anglo-American scholarly world. After Odd Arne Westad's "The Cold War: A World History" (2019) and Lorenz Lüthi's "Cold Wars: Asia, Middle East, Europe" (2020) vast global histories of the Cold War, we now get Petra Goedde's attempt to view the Cold War through a new lens, namely from the perspective of the politics of peace. In her subtitle Goedde claims, hers is a "global history" of the Cold War, too. All these three scholars are Europeans who have found gainful employment in North America - Westad, a Norwegian, now at Yale (formerly at LSE in London and Harvard), Lüthi is from Switzerland, now teaching at McGill in Montreal (Canada). Goedde is German and teaches at Temple University in Philadelphia.

Right after the dropping of the two atomic bombs on Japanese cities, both sides in the Cold War understood the broad desire for peace in their populations and used peace "as a rhetorical device", operating with the principle of "si vis pacem, para bellum" ("if you want peace, prepare for war") (13). The Soviets propagandized peace and attacked U.S. imperialism. They supported peace advocacy groups and founded the "World Peace Council" (WPC) in 1949 in Paris. Moscow also unleashed an intense campaign for peace. Like the Americans, the Soviets stressed "military strength as a guarantor for peace" (17). The U.S. denounced Stalin's "peace offensive" as propaganda. The U.S. tried to start its own "peace initiative", realizing that they could not cede peace advocacy to the Kremlin, especially as the "desire for peace" was stronger in Western Europe than in the U.S. Goedde sees the ultimate paradox in "citizens on both sides of the iron curtain clamor[ing] for peace" while "the political action of their leaders consistently prepared the ground for another war" (24) with their massive nuclear rearmament. After Stalin's death, the Eisenhower Administration tried to "thwart" the new Soviet leadership's "campaign for 'peaceful coexistence'" with his "Atoms for Peace" initiative, that is the peaceful sharing of nuclear energy by the U.S. for civilian use. In 1957 Eisenhower adopted the "waging peace" slogan (31) to address the concerns of the population. The nonaligned world, which met in Bandung in 1955, also issued its concern about nuclear war posing a threat to all humanity.

Since the Old Left advocated for peace through the orthodox Soviet dominated WPC, a younger generation of non-communist peace advocates split off ("New Left"). Only when the students protested in the civil rights struggle and against the Vietnam War in the mid-1960s, did the anticommunist political establishment take note of them and their radical pacifism. In 1954, the Lucky Dragon incident - a Japanese fishing boat got caught in the fallout of an American H-bomb test in the South Pacific - "brought worldwide attention to the health and environmental consequences of nuclear testing" (76). Both superpowers tested more and more powerful bombs in the early Eisenhower Presidency. The ranks of antinuclear peace organizations swelled quickly. The prominent Russell-Einstein Manifesto (1955) and the "Göttingen Manifesto" (1957) by prominent German nuclear scientists raised awareness about the dangers of nuclear testing and war, as did the Pugwash Conference of scientists (1957). Norman Cousins brought nuclear testing opponents together in the "National Committee for a Sane Nuclear Policy" (SANE) (1958). The "Greater St. Louis Citizens' Committee for Nuclear Information" (CNI) founded by the environmental activist Barry Commoner and a group of women ("Eves Against Atoms") in 1958 also was concerned with fallout from nuclear testing, especially strontium-90 building in the bones of children. In Great Britain the "Campaign for Nuclear Disarmament" (CND) gained strength in the late 1950s with its Easter marches. On top of it, Dr. Spock became worried over nuclear fallout and children's health. It was this broad citizens' movement, Goedde makes this very clear, that eventually succeeded in bringing about the signing of the Atmospheric Nuclear Test Ban Treaty in 1963.

In the next two chapters Goedde addresses conceptualizations of peace among religious communities and women. Pope John XXIII advocated for nuclear disarmament with his encyclical Pacem in Terris (1963). In Germany it was the prominent Protestant theologian Martin Niemöller who advocated for peace. Catholics and Protestants increasingly doubted the validity of the "just war" doctrine in the nuclear age. They considered American bombing of cities in World War II and the destruction of Hiroshima and Nagasaki as immoral, "rendering just war impossible in the atomic age" (104). In the Anglican Church it was Cannon John Lewis Collins who joined the British peace movement. Leaders of the Christian peace movement reached out to partners on the other side of the Cold War divide and thus helped "crack[] the iron curtain", laying the groundwork for détente (114).

In women's peace activism "the trope of motherhood" played a crucial role. After all, atomic bombs affected mothers and children as much as soldiers. Mothers began "grassroots activism on behalf of peace and against nuclear war" (133). Women activists like Jane Addams founded the "Women's International League for Peace and Freedom" (WILPF) as early as 1915, and after World War II countering the "destructive tendencies in the masculine mentality" in the nuclear age (137). Women also founded the more militant pacifist "Women's International Democratic Federation" (WIDF), and their American branch, the "Congress of American Women" (CAW). Since there were communists in the CAW who met with communists across the iron curtain, they got in trouble with the McCarthyites and the House Un-American Activities Committee (HUAC) and their anti-communist agenda. The American organization "Women Strike for Peace" (WSP) stressed the personal role of women as wives and mothers. Their concern was about their children's health. Their efforts to keep their sons from serving in the military pulled them into the anti-Vietnam War movement. When HUAC called a hearing on the WSP's dialogue with the Soviet Union, women brought their children to the hearing, turning the Congressional investigation into a joke.

Goedde's chapter on "decolonization's challenge to the global politics of peace" is not about the global South, as one might expect, but about the reception of theorists of violence against colonial powers such as Frantz Fanon, Che Guevara, and Mao Zedong, as well as Herbert Marcuse and Régis Debray in the U.S. and Europe. Fanon's theory of "violence of resistance" and Guevara's "create many Vietnams" were in direct conflict with Gandhi's non-violent resistance to colonialism and racism doctrine. In 1965 antiwar activists became frustrated with the growing state-violence against them. The mood shifted from nonviolence to militancy (169). With the state violence escalating in 1968, the antiwar movement shifted to violent militancy in the U.S. (Weathermen), Germany (Red Army Faction) and Italy (Red Brigades). Moderates distanced themselves from the terrorists. Goedde raises some important questions here, like whether the peace activism of the early Cold War movements "help[ed] bring about the militant movements of the late 1960s". Did the violence of these activists "discredit the earlier messages of peace and nonviolence"? (184). But to be clear, while readers might expect a turn to the global peace movement, Goedde stays in the West in this chapter, too.

Goedde concludes this fine book with a chapter on the "politics of peace." In this more conventional chapter of political history, Goedde shows how leaders responded to the peace activism of civil society in the 1950s by "co-opting" the peace movement's demands in the 1960s (189). From Eisenhower to Kennedy to Johnson to Nixon, American presidents spoke the rhetoric of peace, particularly after the spectacular Cold War crises in Berlin and Cuba in the early 1960s, when the world came closest to nuclear war. It is in this moment that the Nuclear Test Ban Treaty was signed between the two superpowers. The high points of détente in the early 1970s with Willy Brandt's Ostpolitik in Germany and Nixon's SALT I Treaty with the Soviets, were the culmination of efforts of détente started by the transnational peace movement in the 1950s and embraced by presidents and the Soviet leadership in the 1960s. Political leaders on both sides of the iron curtain finally began to understand that a politics of peace "could restore domestic tranquility, economic prosperity, and international respect" (212). In the most brilliant sub-chapter of the book, Goedde looks at the cultural politics of the early 1960s. She exposes the absurdity of the nuclear arms race and deterrence doctrine with George Orwell's and Joseph Heller's novels "1984" (1949) and "Catch-22" (1961), Stanley Kubrick's classic film "Dr. Strangelove" (1964) and Leonard C. Lewin's fake 1967 publication "Report from the Iron Mountain on the Possibility and Desirability of Peace". Looking at the Cold War from the perspective of peace is not only an innovative and novel approach but also a revealing one. Civil society in the United States, Europe and Japan always understood how absurd the nuclear arms race was and called their leaders out for it.