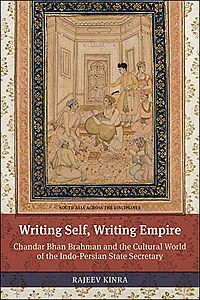 Chahār Chaman, the Four Gardens, is a remarkable text, not only due to its author and contents, but also to its form. What drives an author to string together four chapters called "Gardens" with completely different contents? Whom does his work appeal to and what should the inclined readers take away from it? Rajeev Kinra explores these questions in his study, which was published in the prestigious South Asia across the Disciplines series, is freely accessible via the open-access service Lumos of the University of California Press, and can be downloaded as a pdf file.

While the whole text of the Chahār Chaman has not received much scholarly interest before, the first and second of the "four gardens" are better known to historians of the Shah Jahānī period and have already been used as quarries for the (positivist) exploration of "historical truth". In these two "gardens" the author deals with the functioning of the court, the daily routine of the ruler and administrative questions. The rest of the two, in which Chandra delves into his mystical, almost syncretic ideas of Sufi religion and the art of writing memories and personal letters, have been left aside by scholarly reception. However, as Kinra shows, it is with these parts of Chandra Bhān's writing that we are able to get, through the words of this Mughal intellectual, to his worlds.

Rajeev Kinra suggests a different reading in the title of his study: Chahār Chaman can be interpreted as an ego-document, as a type of self-representation by the author, who however seems to have not only his own person in mind, but rather the representation of a larger body of persons. This includes some of his ancestors, but also those "higher lots" at the Mughal Court to whom our author himself, his father and his grandfather served as writers and who in return held their hands over their munshīs (secretaries). From this point of view, the internal organization of the "Four Gardens" does not appear as arbitrary as it might appear when just reading the description of the contents. Rajeev Kinra is able to trace Chandra Bhān's own image as an enlightened munshī in a poignant way. In Kinra's interpretation, we encounter a personality from Chahār Chaman and further writings from Chandra's pen who does not have to throw overboard either their Brahman roots or their knowledge of Sufi Islam acquired at the Mughal court. Rather, the own family tradition, the mystically inclusive attitude of Sufi Islam and finally the institutionalized tolerance and cosmopolitanism of the Moghul court combine to form the foundation of Chandra Bhān's self-perception.

In his study, Kinra draws not only on the Chahār Chaman, but also on letters, documents and poems written by him and preserved in the Munshaʾāt-i Brahman. This allows for a comprehensive look at Chandra Bhān's intellectual world - as the first chapter of the book is likewise called. In the following chapters, he takes a more in-depth look at individual aspects, roughly following the structure of Chahār Chaman, and also including later reception of his work.

With Kinra, the reader discovers these intellectual worlds along a number of guiding lines of argumentation and analysis. Kinra's ambition is to read Chandra Bhān's written legacy as a "corrective" to the existing image of the Shah Jahanī period. He argues, as did Audrey Truschke for Aurangzeb, against selective source reception, which continues to determine the research consensus on much of Mughal history. What Kinra addresses are not actually revolutionary insights, but correspond to what a reader uninfluenced by the research lines of Mughal Studies would suspect anyway. For example, objectively speaking, it is no wonder that the elites socialized under Akbar and Jahāngīr at the Mughal court continued to live the principles of sulh-i kull even after Jahāngīr's death, and that even (and especially) the Brahman or other "Indic" servants of the court or the nobles continued to provide their services. All the more it is, however, worth emphasizing that the openness of the Mughal system and its interwoven intellectual world, which has meanwhile been recognized from the Akbar and Jahāngīr periods, continued to exist under Shah Jahan and beyond and did not fall back into a religiously motivated "oriental despotism". With Kinra's study, another spotlight falls not only on a single case study. Kinra is also able to revive Chandra Bhān's administrative and intellectual environment through his writings. For the Mughal Studies it is more than welcome that the above-mentioned continuities of intellectual and political openness are not only acknowledged, but rather also documented in source material. This is what Kinra is doing, and it is to be hoped that his work will inspire many more, which may lead to a fresh look at the Mogul Empire unaffected by the colonial narrative of decline. Writing Self, Writing Empire, therefore, is an excellent and important study, which offers numerous starting points that can serve as a springboard for many further investigations.

In several places, however, Kinra's evaluation of the sources remains on the surface: he hardly deals with Chandra's narrative design and his language, but mostly refers to the content of the writings, even in longer source quotations. It would be a welcome addition to the great achievement of this book if one would also explore Chandra's narrative worlds and techniques. In addition, Kinra addresses many interesting aspects of the organization, administration, and theory of rule that can be further explored from Chandra Bhān's writings. These perspectives do not detract from the book in any way, for even if the reader would like to have prompt information about this or that question posed en passant at one point or another, Kinra's argumentation is complete and self-contained. It would not be possible for a monograph that also pursues a stringent agenda of its own to consider these further questions. But it is precisely this frequent pointing beyond itself that makes this book so valuable for the Mughal Studies. It is time for us to come up with the insight that a text, once placed in the centre by a monograph, is far from being fully explored, but that already known material not only permits but also demands a multitude of approaches and questions.

For this reason, Rajeev Kinra's book is not only a valuable contribution in terms of content. The Mughal research community can also take it as an impulse to keep a critical eye on one's own work at all times and to continue to free this branch of research from its frozen (colonialist) legacy. Quite apart from that, Writing Self, Writing Empire is a fascinating reading that is to be recommended for everyone who is interested in Mughal history and culture, literature studies, Intellectual History or simply a fresh look at a time that at first glance appears so distant. Truly khāss-pasand wa ʿāmm-fahm: interesting to specialists and intelligible to a general audience.