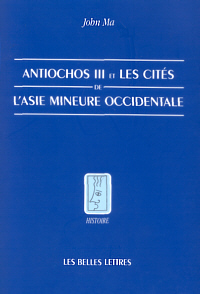 The book under review is an updated French translation of the updated paperback edition of John Ma's acclaimed study 'Antiochos III and the Cities of Western Asia Minor' (Oxford, 1999). The goal of the book is to come to a correct appreciation of the relations between the Greek poleis of Western Asia Minor and the Seleucid king Antiochos III (223-187 B.C.). John Ma tries to navigate between the Scylla of considering the Greek cities totally independent actors and the Charybdis of seeing them as entirely subject to the whims of the king. He shows how cities could fall into different categories, some being technically an autonomous partner of the king, others having lost their independence and being subjected to imperial control. Whatever their juridical status, all cities had to deal with the more or less manifest presence of imperial power.

John Ma argues that this was done by a verbal game of giving and taking, as expressed in the municipal decrees and imperial letters inscribed on stone. He proposes to read these epigraphic texts not as images of interaction but as the interaction itself. Cities used the language of benefaction and friendship to address the king, in order to force him to act according to this ideology. At the same time, the kings deigned to be drawn into this process, as it was a way of assuring the loyalty of their subjects. Ma's book can indeed be read as a passionate plea in favour of the true power of rhetoric and ideology. Military power and violence can conquer an empire, and can inspire the necessary degree of awe and fear on the subjects, but ideology and discourse are needed to ensure the stability of the empire in the long run.

In this way, Ma comes to a balanced interpretation of the Seleucid Empire and the role of the cities in it. He argues for a coherent, unitary, and indeed truly imperial Seleucid state. It was characterised by a strong administration, which included separated chains of command for military, financial and civil matters (on economical administration, see now M. Aperghis, The Seleukid Royal Economy, Cambridge, 2004). Although the administration at times heavily interfered with municipal matters, the cities were not reduced to utter dependence. Even though most lost at least a part of their juridical and political autonomy, they all drew on the rhetoric of praise and philanthropy in order to exercise moral pressure on the king. This rhetoric allowed the cities to pursue their own interests, although they were trapped in an empire.

Notwithstanding its innovative character, one should not forget that John Ma's study is also a very traditional book. The relationship between the Hellenistic empires and the Greek poleis is, indeed, a well-worn subject, most often tackled starting from the wealthy epigraphical material from the cities of Western Asia Minor - a fact to which Ma's own bibliography bears witness. He adopts a method advised by Louis Robert, by basing his study on a dossier of epigraphical texts. It also is traditional in the sense that the scholar receiving most praise, after Louis Robert, is Elias Bikerman, to whose interpretation of the relations between cities and empire Ma essentially returns. Bikerman's study Les institutions des Séleucides was published already in 1938.

Although the book is limited in chronological and geographical scope, its interest and pretensions go beyond this. It addresses a relatively well documented region and period, and consequently its conclusions will be relevant to similar issues in less well documented places and times. Ma indeed attempts to offer an interpretation that can account for the relationship between cities and kings throughout the entire Hellenistic Period. Although the balanced approach of Ma's is very attractive, his conclusions already have found a contestant in, e.g., A. Giovannini, who takes as a model for the Hellenistic Period the treaty between Iasos and Ptolemy I, where the city and the king each act as an autonomous power. (A. Giovannini, Le traité entre Iasos et Ptolémée Ier (IK 28, 1, 2-3), Epigraphica Antolica 37, 2004, 69-87). It seems, however, justified to assume that the shifting political conditions of the Hellenistic Period allowed for more than one mode of interaction. The early Hellenistic Period certainly is different from the days just before the coming of Rome.

Although this is an excellent study, I want to make some remarks, which pertain both to broader issues of approach and interpretation, and to points of detail.

John Ma focuses exclusively on politics, and moreover on 'grand' politics. The only question asked from the texts is what they tell us about the relation between empire and polis. The implicit assumption is that this bipolar relationship is fundamental to understand the political structure of the Seleucid Empire. It is certainly a fundamental issue, but probably not the only one. Ma risks to restrict the motivational horizon of the historical actors, and to lose other fundamental issues out of sight. For example, Beate Dignas [1] has recently argued that the bipolar political relation king-polis should be widened to the triangle king-polis-sanctuary. She has pointed out that the Hellenistic kings were motivated by truly pious ideas in their dealings with the great sanctuaries, and that this should not by reduced to a purely political matter (40-43, 107-108). A similar remark could be made concerning the inner life of the cities, which also receives scarce attention in Ma's book. A richer understanding of the political life of the poleis might lead to a more multi-faceted perspective on the dealings of the poleis with the kings, and might also offer a wider background to the language of philanthropy.

At times Ma seems so enthusiast about the power of speech that he seems to forget that this speech functions in a precise social and political context. On page 75 he writes, for example, that the interference of Rome threatened to break down the Seleucid discourse of authority, which functioned to control the cities. But there is more going on than the breakdown of a discourse. The political power of Rome, and the possibility of a military clash, weakened the threat of a strong Seleucid military intervention. The threat of military power was ultimately the foundation on which the discourse rested. At times one has the impression that the discourse is too much studied for itself and that what lies outside it does not receive due attention. But as much as a discourse creates a reality (as Ma shows in an excellent way), reality also influences the discourse, and relations of power may even create a discourse.

After these general observations, I want to draw attention to one minor point of interpretation where I disagree. John Ma uses the letter of Antiochos nominating Nicanor as a "high-priest of all the temples" in the territories beyond the Taurus as a kind of model for the functioning of the Seleucid Empire (SEG 1987 nr. 1010, from 209 B.C.). He refuses, however, to see in Nicanor a high-priest of the centralized royal cult, which is attested in an inscription of 193 (OGIS 224). The identification of both charges is indeed a contentious issue, on which I have recently expressed my views. [2] One cannot completely rule out Ma's distinction between both charges, but this is one of the rare occasions in his book where his argument is logically deficient. He draws on L. Robert to date the creation of the ruler cult to ca. 204 (p. 24 n. 4-5). [3] Robert's argument was that the Nicanor mentioned as 'high-priest' in the inscriptions of Amyzon from 202-201 must be the high-priest of the royal cult. As the inscription of 209 does not call Nicanor explicitly high-priest of the ruler cult, Ma argues, this cult did not yet exist. But this argument can be used against Robert's dating as well, as the inscriptions of Amyzon simply call Nicanor 'high-priest'. If one accepts Robert's argument, one has to conclude that the high-priest Nicanor mentioned five years earlier was high-priest of the royal cult as well. If one rejects it, we should date the creation of the ruler cult to 193, when this function is explicitly mentioned for the first time. Ma presents an illogical mixture of arguments. Elsewhere he seems to add to the confusion. On page 50 he writes that Antiochos III wanted to recreate the function of high-priest of the royal cult, whereas earlier it is said that he created it ca. 204.

I conclude this review with a number of technical remarks. As in the English versions, the index is very selective, to the point of being useless. Especially the Index nominum and the index of literary sources are hopelessly incomplete. Although is has become common practice, I regard it as my duty to protest against the cumbersome practice of using endnotes instead of footnotes. The book is well produced, and I have noticed only a few typos. Errors in Greek and in the translations are slightly more numerous. A more thorough revision might have spotted these: page 82: read dynámeis, not dýnameis; page 134: read asthenounton in stead of asthènounton; page 147: read prassein, not prasein; page 147: read asthenountas, not athenounthas; page 150: read hekonton, not ekonton; page 167: read symmorias in stead of symorias; page 198: the translation of doc. 26 differs from that on page 375-382; page 424: genomenon is not translated; page 427 ekeinou of l. 10 is not translated.

Most of these remarks are mere quibbles. John Ma's book has lost nothing of its appeal in the translation made by Serge Bardet. It studies in an exemplary way an important issue in the history of the Hellenistic Period. We can only wish that somebody will expand on his conclusions.

[1] Beate Dignas: The Economy of the Sacred in Hellenistic and Roman Asia Minor, Oxford, 2002.