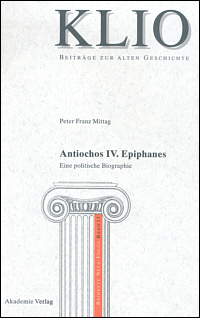 Seleucid history is never limpid, but after Antiochus III it becomes increasingly patchy and marred by uncertainties. This is certainly true for the reign of Antiochus IV, king of the Seleucid Empire (175-163 B.C.), who owes his place in history mainly to his role in the Maccabean revolt (from 167 B.C. onwards) and his successful campaign against Ptolemaic Egypt abruptly halted by Roman intervention (169-168 B.C.). Especially the first event explains the attention he continues to attract, quite in disproportion to his relatively short reign that was only a sideshow compared to contemporary events in Macedonia.

Peter Franz Mittag's "political biography" of the eighth Seleucid king strengthens this impression of the relative unimportance of Antiochus. I mean this in the first place as a compliment. His 2004 Habilitationsschrift offers a sober re-assessment of Antiochus' policy, which will come to replace Morkholm's 1966 biography. By situating the king's actions in their proper historical and constitutional context, he hopes to show up the logic of Antiochus' policy and personal actions. Occasional contentions that Antiochus IV was a madman or emotionally disturbed, are convincingly shown to be wrong. An Antiochus brought back to real proportion is, however, far more unremarkable.

Mittag has given his book a chronological structure, making chapters on events alternate with those discussing structures. This is sometimes infelicitous: the sixth Syrian war is spread over three different chapters, interrupted by one on domestic policy. The structure of the chapters is usually logical and clear. I will only briefly discuss the different chapters, before addressing some general features and tendencies of Mittag's account. After the introduction follows a brief discussion of the sources. Chapter three gathers the little that is known about Antiochus before he became king with the help of Eumenes II in 175 B.C. The next chapter assesses the framework of Antiochus' rule. Mittag stresses the geopolitical context, with the fragile balance between the Hellenistic states and the unpredictable behaviour of Rome, and the financial constraints imposed by the payments demanded by the treaty of Apamea (188). Chapter five discusses the first years of his rule. Although he owed his throne to Eumenes II of Pergamon, Antiochus followed an independent course, trying to foster the Seleucid interests with embassies and dedications in the Greek world. The reform of coinage in Antioch aimed at giving a renewed impetus to the economy. The assumption of the title Theos Epiphanes also contributed to stabilising his position as king. A brief chapter on events between 173/2 and 170 is followed by an account of the sixth Syrian war, spread over three chapters (7, 9, and 10). It was a military success for Antiochus, who only had to back off under Roman threats. Antiochus was now at the height of his power, and Mittag interprets in chapter 8 the reform of small coinage in cities of the empire as imposed by the king, in order to promote local economic life. Antiochus IV also seems to have strengthened his grasp on Babylon, by intervening in the temple administration. Chapter 11 offers a cautious treatment of the Maccabean revolt, and Mittag manages to offer a cle ar account of the numerous difficulties involved. He stresses the limited role of the king in the events, and explains the origins and course of the revolt through the interplay of the local Seleucid administration and different groups among the Jews. After a discussion of the procession in Daphne (166 B.C.) in the framework of Hellenistic royal display (chapter 12), Mittag turns to Antiochus' "anabasis", i.e. his campaigns in Armenia, Elymais and Persia. He stresses the king's political (reconquest of lost territories) and economic aims (opening up of trade routes). A last chapter discusses the little that is known about Antiochus' death.

A strict focus on Antiochus and his policy commands the work. Mittag aims at offering a reconstruction of his acts and explaining them through their context. It is consequently not a study of the Seleucid empire in Antiochus' reign, nor of Antiochus' role and importance in the development of Seleucid policy and institutions. This approach has its strengths, as Mittag succeeds in underscoring the economic rationale that underlies many of Antiochus' actions. The coinages reforms, of which Mittag offers clear and convincing analyses, are obvious examples, but the economic motives of the anabasis are also made very plausible. One must remark that Mittag relies heavily on the work of G. G. Aperghis [1], whose approach has been, however, criticised [2]. On the other hand, this approach seems at times to narrow his perspective on Antiochus considerably. Early on, Mittag stresses the importance of the royal philoi and offers a prosopographical list (63-65). Little is done with that, which is disappointing, especially in the light of his interpretation of the Maccabean revolt as due to the dealings of the Seleucid administration with local groups. A wider approach, incorporating results from studies on other Seleucid rulers, could have helped to make things more clear. But Mittag seems reluctant to do so. In Mittag's discussion of the relations between king and polis, which he seems to reduce it to a "do ut des" (103, see also 67), the results of John Ma's study of Antiochus III (1999) are unsufficiently incorporated.

Mittag's perspective is narrowed down in other respects. I will leave aside the instances where he dodges thorny issues like the dating of the Maccabean revolt because they are irrelevant to the assessment of Antiochus' policy (256, 267). His discussion of the Maccabean revolt, which argues that Antiochus dealt rationally with the Jews as any Seleucid king would have done, refuses to take the further development of the revolt after his reign into account (281). The suggestion seems to be that he cannot be blamed for the more serious problems his successor had to cope with. But one could also argue that it was Antiochus' failure that he caused the revolt in the first place and had not sorted out Jewish affairs. I also wondered if one could not establish a link between Antiochus's increased grip on the Babylonian temples and Antiochus's dealings with Jerusalem. Mittag seems to see the former as an innovation, but the latter as normal. This may be the case, but the contrary possibility should not pass unmentioned.

A final example can illustrate how Mittag occasionally lets potentially valuable insights slip through his hands. In the conclusion he suggests that Polybius' description of Antiochus' odd behaviour (26.1), including excessive interest in goldsmiths and luxurious bathing, is derived from Ptolemy VIII. (334: His contention that Polybius alternates negative and positive features in this passage is not entirely accurate: section II, Antiochus IV behaving as a Roman magistrate, is explicitly qualified as negative.) But Ptolemy VIII himself was known for quite some bizarre behaviour himself, like posing as Dionysos, a feature that is usually linked to Ptolemaic royal ideology. The link between Polybius's portrait of Antiochus IV and Ptolemy VIII could have opened up interesting perspectives on Hellenistic royal ideology. Sadly Mittag prefers a rather pedestrian discussion of the plausibility of Polybius' critique.

The strength of Mittag's approach, to explain Antiochus through the logic of actions commanded by the geographical and political constraints in combination with a strict focus on Antiochus' policy, is thus also its weakness. It leads to reductionist reading of events that leaves other possibilities or wider issues unexplored. The dearth of evidence may be advanced as an excuse. But one could opt for studying certain themes for the later Seleucids in general (e.g. king-polis relations or administration) instead of focusing on a single monarch. The source situation will never be perfect, but one will be much better able to grasp the dynamics of the Seleucid state.

This criticism should not, however, detract from the merits of Mittag's work. Its grasp of the sources and modern literature is usually secure. [3] Problems in sources and interpretation are laid out with clarity and sound reasoning (only the discussion of the pay of mercenaries on page 33 note 1 seems illogical). Mittag's sober judgement will make it the first refuge for all those interested in Antiochus IV.