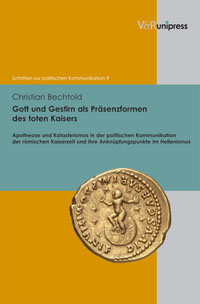 This monograph was submitted as a dissertation in Frankfurt and Innsbruck in 2009/10 and studies katasterismos, that is, transfer to the stars, in the Roman imperial cult, from Caesar to the end of the second century. It contributes in two ways to scholarship, by focusing on one particular aspect of the cult, and by doing so from the perspective of "political communication". It does so very competently and learnedly.

The book starts with three introductory chapters. The introduction properly speaking charts the principate as an acceptance system and introduces the theoretical framework of "political communication". Two aspects are important: on the one hand, communication always is interactive and cannot be the mere imposition of a view, in this case by the emperor. One therefore has to understand the knowledge and expectations of the addressees. On the other, communication creates and shapes realities as much as depicting them. The last part of the introduction, summarizing ancient ideas about the transcendence of the stars, leads into the second chapter, which studies the development of mythological tales of katasterismos. Alexandrian scholars, in particular Eratosthenes, played an important role in this process. Chapter 3 studies in detail two Ptolemaic examples, Arsinoe II and Berenice II, to demonstrate that they did not function as examples for Roman katasterismoi. Bechtold argues convincingly that Roman katasterismos was rooted in Roman traditions, in particular the association of stars with the Dioscuri and Apollo and the stories of transfer to the stars associated with Hercules and Romulus.

This is a sound conclusion, as far as the immediate ancestors of deification of Romans by katasterismos are concerned, but for the wider context Greek influence cannot be excluded: is it not possible that the stories about Romulus were influenced by Greek ones, as are those about Hercules? Moreover, there clearly is Hellenistic literary influence on the literary depiction of katasterismos in Roman sources (in particular through Catullus' reworking of Callimachus' poem on Berenice and through translations of Aratus).

Chapter 4 has Bechtold at his best: he demonstrates meticulously that the earliest sources associate Caesar's deification with a star (the so-called sidus iulium), whereas in the 20s of the first century BC the sign is understood as a comet. Literary evidence here follows the numismatic sources. He argues that this change is associated with a change in ideological interpretation pursued by Augustus. He could use the comet not only as a sign of Caesar's transfer to the gods but also as an omen of the new golden age that was about to start with his own accession.

Chapter 5 traces katasterismos from Augustus to Marcus Aurelius. Bechtold notes that the motive is still used on coins for Tiberius and Augustus during the reign of Caligula and that under Domitian katasterismos is extended to family members of the princeps. Typical for the Antonines is the compounding of symbols referring to deification: not just astral symbols are used but also an eagle or a winged Eternity. Especially the idea of Eternity becomes prominent under these emperors and Bechtold offers a convincing interpretation of the relief on the column of Antonius Pius (272f.). Progressively solar symbolism takes the place of astral signs. From the emphasis on Eternity, Bechtold draws the general conclusion that katasterismos had the aim of making dynastic succession visible and stable.

Chapter six assesses the impact of the katasterismos-motif in provincial coinage and literature and studies how it interacts with general beliefs about the afterlife, studied through funeral inscriptions. This long chapter is mainly a discussion of catalogues of material. Whereas the reception in provincial coinage is limited, it is much stronger in literature, which leads Bechtold to the conclusion that katasterismos found wide acceptance in the Empire. The same conclusion is reached by looking at funeral inscriptions. Bechtold suggests that imperial katasterismos may have been the catalyst for this popularity.

The conclusion offers a clear summary but ends on false note. Sticking to his theoretical framework which insists that communication is never unilateral, Bechtold states that katasterismos, as a symbol of the continuity of the dynasty, did not aim at making the people of Rome accept dynastic succession, but articulated the popular expectation of such a succession (463: "sondern die Umsetzung dieser an den Kaiser gerichteten Erwartung zu artikulieren"). Dynastic succesion is even termed the natural continuation of Republican traditions (463: "Sie war die selbstverständliche Fortführung republikanischer Traditionen"). I fail to see how dynastic succession in the principate can be a mere continuation of Republican practices. Katasterismos can therefore not merely be the response to an expectation of dynastic succession. If anything, it is a response to the belief that the souls of virtuous and great figures become divine. Bechtold's general conclusion is, in more general terms, a bit disappointing too: in emphasizing that katasterismos serves the expression of dynastic continuity, he has attributed to katasterismos the function that the apotheosis is generally credited with. One wonders what the specific role of katasterismos was.

After the conclusion, an eighth chapter follows tracing the disappearance of katasterismos after the second century and two appendices.

Whilst Bechtold has a firm grasp on his material, I am not always convinced by his conceptual approach. I do not see the distinct gains of knowledge made by applying the communication paradigm. We already have a more complex understanding of what used to be called 'propaganda' or 'ideology', and the leading question of the book, whether katasterismos chimed with pre-existing conceptions of the addressees, seems self-evident: imperial communication surely used concepts and ideas that circulated. It would have been more exciting to set out more explicitly how the motif is consciously adapted and changed to suit new conditions and each specific genre (I would not, as does Bechtold, identify coins as the "political discourse" (189, 202) and would like to see a more complex treatment of the literary sources, where most is made of katasterismos).

A general discussion of the position of katasterismos within the imperial cult would have been useful, especially given the fact that this is the background to chapters 5 and 8. Also useful would have been a brief discussion of what katasterismos actually covers: the reader is left to discover that it covers both the transfer to the stars and the use of stars to symbolize deification. Both are obviously related, but not identical.

Finally, pp. 293-5 reject the notion of belief in the study of the imperial cult with reference to Simon Price's classic Rituals and Power (1984). Price's rejection of beliefs as a Christian notion is, in fact, a red herring (cf. H. Versnel: Coping with the Gods, Leiden 2012). More importantly, in the context of this book it is counterproductive: Bechtold's argument is eminently about beliefs about the afterlife and virtue. Katasterismos can only function if there exists a belief that stars can be, even metaphorically, the place where virtuous individuals go after death. In fact, I would rather argue that the belief that virtuous souls went to the stars is one of the things that made deification of emperors possible in the first place.

To conclude, Bechtold has written a very useful book that offers convincing interpretations of specific bodies of material. It provides a springboard for further reflection on the nature and development of the imperial cult.