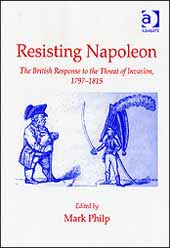 This edited volume focuses on the Anglo-French dimension of the Napoleonic Wars, and in particular the threat of a Napoleonic invasion of Britain that attained its maximum intensity in 1803.

The opening four chapters - by Philip Harling, Nicholas Rogers, Katrina Navickas, Jon Newman - focus especially on the defence arrangements made in Britain to counter this threat. In their different ways, these four contributions all undermine the notion that the Napoleonic threat resulted in some great popular-loyalist coalescence between public and government for king and country.

Harling, for example, demonstrates how even 'loyalists' subjected the British government to routine criticism for its alleged corruption and mismanagement of the war effort, and that demand for reform did not suddenly disappear. Those on the radical ('left') end of the political spectrum simply couched their demands for reform in patriotic language, claiming that change was necessary in order to defeat Napoleon. Given serious British setbacks during the middle-phase of the Napoleonic Wars, including the Walcheren debacle (1809), the government was certainly vulnerable to charges of incompetence.

One might object that Harling's chapter is only applicable to the post-Trafalgar period when the worst of the invasion threat was over, and Britons felt more secure and hence able to indulge in the luxury of opposition politics. Does not the earlier (1803) mobilisation - with apparent ease - of 380,000 volunteers as a supplement to the regular forces tend to support the kind of arguments associated with Linda Colley about the forging of a British national identity based upon loyalty to the Crown?

The analysis in this volume of the volunteer effort at local level casts doubt on this. Rogers, for example, in his chapter on the Sea Fencibles, shows how this unit was less a symbol of national defence patriotism than of the desire of ordinary people to escape service in the regular forces where conditions were harsher. We learn (44) that in 1803 there was more resistance to the infamous press gangs than in any year of the previous seventy five. The Sea Fencible system became part of this popular strategy of resistance to the British state, as its members abused it as a shelter from the Royal Navy, much to the fury of the Admiralty. Whitehall might fume, but there was ultimately little the government could do, dependent as it was on the co-operation of local elites to meet its manpower requirements.

The difficulty of balancing national (as defined by central government) and local interests is nicely drawn out in Navickas's chapter on Manchester and Liverpool. In Liverpool, the issue at stake was the fortification of the harbour from possible French attack. Fortification was supported strongly by the local merchant elite but treated as a waste of resources by the experts in London. This provoked all kinds of centre-periphery tensions with both sides portraying themselves as champions of the national effort. In Manchester, the potential centre-periphery conflict was over-shadowed by conflict within the periphery itself. Here, the volunteer movement offered an opportunity for marginalised but radical religious Dissenters to challenge the established conservative elite.

Within London too, volunteering was hardly an example of national solidarity overcoming social difference, as is amply demonstrated by Newman's contribution. The earliest volunteer unit in the city was the London and Westminster Light Horse Volunteers. Its policy was to exclude from its membership any 'Jew ... [or] person who works with his hands at any handicraft or mechanical profession' (78). Social and local differences found expression in other ways, including even in pitched battles between volunteer units during joint exercises. Nor do tensions between volunteer units and the local civilian population appear to have been uncommon. One might accept instances of this in the remoter parts of Britain, where the threat of French invasion was low.

However, Jon Mee and Mark Crosby in their chapter on William Blake, show that popular dislike of the military was a feature of everyday life even in Sussex, which was on the front line. For Blake, of course, the kind of uniformity of opinion associated with nationalism was profoundly at odds with his understanding of Englishness. Given all the problems associated with the volunteer movement, it comes as no surprise that elements within the British establishment doubted the wisdom of their mobilisation and instead argued in favour of boosting the smaller but more professional regular forces. This high-level debate is examined in Charles John Fedorak's chapter.

Chapters 7 to 10 shift the focus away from the institution of volunteering to culture and propaganda, with contributions on visual satires (Alexandra Franklin), the anti-Napoleonic 'Black Legend' (Simon Burrows), monuments (Holger Hoock), and music (Mark Philp, Roz Southey, Caroline Jackson-Houlston and Susan Wollenberg). In their own ways, these contributions similarly question the extent to which the wars contributed to an uncontested national identity.

Franklin notes this, for example, with respect of the ambiguities in representations of John Bull as the physical symbol of the nation. Burrows, in similar vain, shows that even years of endless war and propaganda failed to dispel a lingering admiration for Napoleon amongst the British, something that he unwisely gambled on when he chose in 1815 to surrender to them rather than to one of their coalition partners.

The extent of this propaganda, much of it officially sanctioned and funded by the British government, is explored by Hoock in a chapter whose value is enhanced through the adoption of a comparative framework that also encompasses France. Monuments, through their very nature - their expense and location in prominent public places - are a form of propaganda more amenable to official monopolisation. Popular songs, especially ballads performed in the street, in contrast had greater potential to reflect the diversity of humble opinion in a way the government opposed.

The final two chapters of this volume stand apart somewhat, though they similarly contain interesting insights that generally support the broader conclusions of the preceding contributions. Annie Crépin and Vincent Cuvilliers's essay on anti-English discourse in northern France shows the remarkable absence of any significant popular hostility towards the small number of British people encountered in the region. Nor was Anglophobia dominant in official propaganda, which more often than not dwelt upon internal rather than external enemies. Renaud Morieux's piece, finally, fills in some of the institutional detail of Napoleonic-era management of nationality and immigration/emigration issues.

Collectively, all these chapters undermine the beautifully simple paradigm of Britons (and indeed Frenchmen) injected with a greater sense of national purpose by the Napoleonic Wars. Instead, the picture that emerges from this collection of micro-histories and case-studies is far messier. We are confronted less with a war between nations than a plethora of conflicts involving centres and peripheries, social groups, localities, institutions and small military units. However, whilst these chapters question the existence of 'national' motives of those caught up in the mobilisation effort, they do not dispute the sheer magnitude of the effort itself. To quote Philp in his introductory chapter, 'the quotidian preparations for invasion, the mobilization and manoeuvring of the military, and the general sense of getting set to resist Napoleon became part of the natural ether for a substantial proportion of the British Isles. (9)'

A tension exists between this assertion and the tendency of the individual contributions to see local or social loyalties as naturally antithetical of a broader national consciousness. However, if one accepts that nationalism's success as an ideology has derived from its ability to be imagined and experienced through the local (and hence tangible), then the discovery of a myriad of other conflicts in of itself fails to disprove that the Napoleonic Wars helped forge a wider national identity in Britain, however contested that identity might be. In highlighting the inadequacies of the current paradigm there is a danger in going too far in the opposite direction.