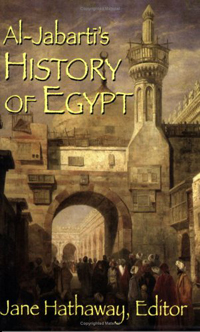 Whoever teaches Middle Eastern history, sociology, politics or global studies, will like to use this book. For Jane Hathaway of Ohio State University presents here in 64 very brief chapters highlights of Egypt's history written by Abd ar-Rahman al-Jabarti (1753-1825). She, well known by her related works and especially her seminal book on "The Arab Lands under Ottoman Rule 1516-1800" (Longman 2008), gives each chapter a short introduction. Occasionally she writes "As I have explained elsewhere..." and equips the reader there and in the part "suggested reading'' with tips for further literature research.

The importance of this book comes not only from the work of the Egyptian historian al-Jabarti, but from the time he describes in his chronicle 'Aja'b al-Athar fi at-Tarajim wa al-Akhbar. This "Marvelous Remnants of Biographies and Reports" illuminates also Napoleon's invasion into the Egyptian and Syrian provinces of the Ottoman Empire and marks the dawn of the modernity in the Middle East since 1798. About that campagin Robert L. Tignor edited al-Jabarti's excerpts in "Al-Jabarti's Chronicle Of The French Occupation 1798: Napoleon In Egypt" translated by Shmuel Moreh (Wiener 1993).

Living in Cairo, Sheikh al-Jabarti witnessed not only this French campaign against the British, but the Muslim scholar reports also how the new Egyptian ruler Muhammad Ali fought the old Mamluk regime and took over Egypt finally in 1805. Since Sheikh al-Jabarti was critical to both, to the infidel Napoleon and to Muhammad Ali as the founder of a new dynasty (that was to be overthrown by the coup of Muhammad Najib and Abd an-Nasir in 1952), his chronicle was unpopular in Cairo. 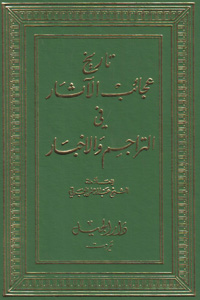 However, with the new printing press in Bulaq, it was first edited in Arabic in 1879. Then a first full translation appeared in nine volumes in Cairo until 1896. Often translated again, available in an Arabic three volume edition of Bairut in 1972 and since 1994 in a four-volume English version edited by Thomas Philipp and Moshe Perlmann, it is still a key document of Muslim scholarship and of Egypt's Ottoman history since 1517. German readers be also refered to Arnold Hottinger's good compilation in one volume (Artemis 1983). Jane Hathaway's work abridged now Philipp's and Perlmann's edition. She added her introduction and commentaries. Our view changed also for there are not only other chronicles available like those of Ahmad Çelebi and Ahmad Kathkuda, but M. Şükrü Hanioğlu presented a much needed history of the late Ottoman Empire (Princeton University Press 2008) with which the reader can put al-Jabarti into the broader context.

Usually scholars discuss the chronicle's effects on three levels: main tendencies on how the Muslim al-Jabarti evaluated Napoleon's Christian armies and the jihad against them, schools of thought about this chronicle in Middle Eastern studies and finally what does it tell us about problems of mutual perceptions in Middle Eastern and Western cultures. The historian Jane Hathaway touches in her helpful introduction all three points. She explains Egypt under Ottoman rule, the French invasion and the rise of Muhammad Ali. Then she introduces the reader to al-Jabarti's life and his chronicle. Finally she describes his own sources, the publication history and changing perceptions of Abd ar-Rahman al-Jabarti.

The perception of al-Jabarti changed dramatically as Jane Hathaway opines: "No longer does he impress us as an isolated scholar attempting single-handedly to resurrect a long-abandoned tradition of Arabophone history-writing; instead, he seems a skilled but a rather insecure historian who takes pains to minimize his debt to his predecessors in the field--and who, perhaps, never quite lived up to the illustrious, indeed almost legendary, example of his father." (XXXIII) Does she like to destroy an old legend just to erect an older one, like his father's who was a well known scholar? That al-Jabarti did not write out of the blue was quite clear though. Also that he did not acknowledge to the fullest some of his main sources and predecessors, is not unheard of in scholarship. Those earlier historians cultivated their quarrels as well, their antipathies and sympathies of colleagues.

Just take al-Jabarti's following words as an example about Muhammad Ali's attempt to modernize Egypt. The chronicler says that the pasha became convinced that Egyptians have a superior aptitude for sciences. Then he noted about Muhammad Ali (p. 327): "He ordered that a school be built in the courtyard of his palace in which a group of natives and the pasha's Mamluks were enrolled under the teacher Hasan Efendi, known as al-Darwish al-Mausili. With the colaboration of a Turk named Ruh al-Din Efendi and several Europeans the principles of accounting and engeneering were taught, as well as arithmetic, geometry, trigonometry, and algebra. Various technical instruments of English manufacture were provided, with which the students could measure distance, elevation, and area. He provided monthly stipends and yearly clothing allowances. They met regularly in this school, which was called School of Engeneering, every morning of the week until shortly past noon, when they returned to their homes. Some days they made field trips to the open country to study surveying. In fact, knowledge of surveying was the pasha's main goal."

It appears that the mechanisms to found and run a school was not all too different to our time. The ruler felt the need to know something about the property sizes and citizens. It was satisfied with the help of foreign teachers, a Turk and an Iraqi - dubbed the Derwish from Mosul, ad-Darwish al-Mausili -, and European advisors. Add to this the usage of English hardware and a couple of paid students until high noon, and the first School of Engeneering emerged right in the palace. The surveying reveals properties and taxes to the pasha's benefit. What a typical interplay of the domestic and foreign factors. Does it not sound all too familiar if we think of current attempts to get a census going in America?

Jane Hathaway's compilation of excerpts, however, is a much appreciated selection of al-Jabarti's key primary sources on Egypt's rulers, peasants, scholars, servants, merchants, and students. It offers multiple glimpses on many aspects of the social life at the banks of the Nile and can well be advised for the use as a textbook in the realm of higher education.