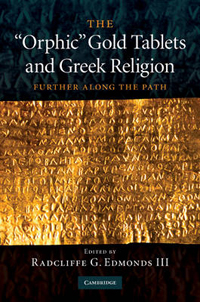 'This is all very strange.' So the great classical philologist, Ulrich Wilamowitz-Moellendorff, summed up his response to the Orphic gold tablets. [1] The first of these gold lamellae or tablets were found in burial sites in Southern Italy; by Wilamowitz's time, more had been discovered, both near the original site and further afield, in Crete and Rome. The tablets were inscribed, most with verses that seemed to describe the journey of a soul in the after-life. One was covered, incomprehensibly, with letters, offering a sort of scholarly word-search game so far unsolved. All have perplexed generations of scholars.

Since Wilamowitz published his observations, further tablets have been found in South Italy, Sicily, Crete, Thessaly and Macedonia. Some offer texts similar to previous finds, others introduce new types, as Radcliffe G. Edmonds III, the volume's editor, describes in chapter 1, a brief but admirably detailed overview of scholarship on the tablets. As he makes clear, and the other essays illustrate, the material remains steadfastly enigmatic. As more texts appear, the puzzles they present deepen, putting scholarly skills of reconstruction and interpretation to the test.

This volume sets out to present some of the methodologies being put to use. Mirroring its subject matter, it brings together essays that are themselves from across time and place. In his acknowledgements, Edmonds explains how work on this book started, in effect, with a conference that he ran in 1997 as a graduate student. Two more conferences followed (in 2002 and 2005, respectively) before the idea for this collection began to crystallise.

Material originally presented at the three conferences appears here. These include the chapters by Fritz Graf, Hans Dieter Betz, Thomas Dousa, Miguel Herrero Jáuregui and Edmonds's own contribution. As well as Edmonds's overview of the scholarship, other chapters include: an adapted translation of a piece by Alberto Bernabé and Ana I. Jiménez San Cristóbal; a chapter by Yannis Tzifopoulos, drawing on material from a recent, previous publication; a highly influential article by Claude Calame; an adapted and expanded essay by Christoph Riedweg; a previously unpublished, but much cited, piece by Dirk Obbink, first delivered at the American Philological Association meeting in 1992; and an unpublished lecture by Christopher Faraone. Although a number of the chapters have been published elsewhere, they are here translated for the first time and/or further adapted for publication in this volume.

Bringing together previously published material in this way does mean that there is, inevitably, some repetition of information. However, these become welcome points of consensus in a volume characterized by rich, scholarly diversity. Not only new methodologies are in evidence but also a range of points of view, conclusions, and even the premises with which each scholar begins. For example, some of the scholars associate Orphic with Dionysiac cults, others argue against this (e.g., from Calame who argues for an Eleusinian-type Dionysiac mystery practice [214], to Betz who suggests an Orphic-Dionysiac cult setting [110], to Bernabé and Jiménez San Cristóbal who assert an Orphic-only cult [passim]; Graf [57] offers an overview of the debate and sets the Orphic/Dionysiac link in historical context). Some read the material as indicating a context of conflicting religious expertise and localization (e.g., Edmonds), others emphasise the role of a single source text (e.g., Riedweg). This is a collection that demands to be read cover-to-cover, if only to allow the reader to grasp the variety of ways in which the evidence can be (re)interpreted and appreciate the skill with which each scholar uses it to craft his particular case.

Along with the introductory essay, Part I of the book comprises texts and translations of all the tablets discussed, with a critical apparatus, a list of principal editions and abbreviations, and tables giving a very brief overview of the burial context of each tablet. These are for the most part very useful, especially since the essays do not all cite the same editions of the texts. Some aspects could have been clarified further: for example, the full significance of the column labeled 'Coin' is not immediately apparent, and a reference to Tzifopoulos's brief discussion of this aspect (174) would have been welcome, especially since there is no entry 'Coin' in the index. Similarly, the reader could have been directed to the additional table of related but unincised lamellae (Group 'G') in the appendix to Tzifopoulos's chapter.

Five essays in Part II (Texts and Contexts) provide the reader with contextual information; six essays in Part III (Semiotic and Narrative Analyses) concentrate on the texts of the tablets. This division is perhaps understandable bearing in mind the complexity of the subject matter and the essay form. However, this is another reason to read the book cover-to-cover: to be able to appreciate the textual analyses within the variety of contexts, and vice versa, and evaluate one in light of the other.

These tablets raise timeless questions about the meaning of life, the fear of death and the yearning for immortality. To elucidate them, these essays transport the reader across culture and genre: from the Iliad (De Jáuregui) to the New Testament (Betz); from oracular texts (Edmonds) to the philosophy of Plato (Graf); from Egyptian funerary texts (Dousa) to a plethora of local Greek rituals and related myths (Faraone). Tzifopoulos's contribution takes us to Crete, and provides the most detailed material analysis, exploring the ways in which local, even individual, influences may have shaped the texts. (His essay also introduces the term epistomion, which he describes as a 'terminus technicus at least among the majority of Greek archaeologists' [167]. It is surprising that the word does not appear elsewhere in the book, not even the index.) In turn, Obbink's masterful performative analysis of the texts compels us to consider the moment, and experience, of the ritual.

As noted, the general Index does have some minor omissions. The Index Locorum provides a thorough listing of texts. There is a general index entry 'Apulian vases', but it would have been helpful also to find vases listed, individually, among the source material. With such a focus on interpretative ambiguity across the volume, some visual aids would have offered benefits. For example, images of some of the tablets would have supported the very succinct descriptions given in the tables. Similarly, it would have been useful to see some of the vase-images of which different interpretations are offered (compare Bernabé and San Cristóbal, 96-97, which emphasises Orpheus's role in Apulian iconography, with Calame, 217, which draws attention to the importance of Dionysus).

The editor deliberately allows the rich diversity of these essays to stand, unsummarised - and rightly so. This collection of essays allows the reader a profound appreciation both of the strangeness of these tablets and the arts involved in their study. However, although this volume will certainly draw the reader 'further along the path', as its subtitle suggests, it may also leave the reader questioning which path she should follow.