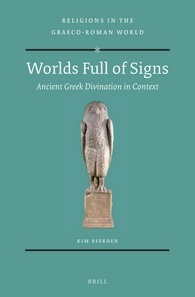 This slim volume comprises an introduction, conclusion, and 8 chapters in 3 parts: 'Introduction to Ancient Divination'; 'Elements of Ancient Divination'; and 'Function of Divination'. Beerden's aim is to address 'what is specific to the omnipresent phenomenon of Greek divination and why this might be so' by comparing Greek divination (Greek-speaking world, 800BCE-146BCE) with divination in Republican Rome (the Italian peninsula, 509-31BCE) and Neo-Assyrian Mesopotamia (880-612BCE). Occasional diagrams illustrate, e.g., the steps involved in the divination process.

Current scholarship on divination is at an exciting time, with new evidence and approaches offering detailed and nuanced insights: a thorough comparative project could provide a further step-change - as Manetti's Theories of the Sign, 1993. But the present book, although ambitious, disappoints. For a start, the methodology is confusing: Beerden argues that variety in the sources does not invalidate the enquiry as long as we '[...] take into account the character and goal of each type of evidence' (51; citing Malul, The Comparative Method, 1990); yet she argues for the necessary decontextualisation of the phenomenon being compared (52). Although here this just introduces her chosen themes, nevertheless, in the body of the book crucial contextualisation is missing, nor does the end of the book return to the promised recontextualisation of Greek divination.

She is right that 'a certain degree of generalisation' (2) is unavoidable in such a large-scale project, but here discussions are often startlingly brief, with key evidence skimmed over or omitted: e.g., in 'Relationship Client-Expert', Rome receives 3 sentences (62). As elsewhere, this focuses on 'the various bodies of experts [used for] public purposes' (61) - the Etruscan background of the haruspices is not discussed, nor those outside Rome (although Beerden is aware of Roman freelancers, they receive short shrift). In discussion of Mesopotamian diviners, the focus largely rests on those at court, yet other scholars offer more interesting angles: Reiner (JNES 19, 1960) suggests that Sultantepe Text 73 concerns private experts helping private individuals; but Beerden includes it in a section on do-it-yourself divination. In contrast, Beerden's discussion of Greek seers focuses on freelancers, with no mention of, e.g., the exegetes in Athens, or Spartan state interpreters - serious omissions if, as here, claims about the 'institutionalisation of divination' are being made.

This lack of detail may be the result of the 'etic' approach, employed inconsistently across the book. Its value here is unclear: e.g., examining the socio-economic status of diviners is intriguing and various facets are explored, but with few details about specific contexts (63-105). The claim that experts in Mesopotamia were not poor cannot be reliable if that group encompassed a range of levels and contact with the king (102; omitted here by Beerden); Koch-Westenholz argues for the proverbial poverty of the Chief Scribe/ummanu of the king (Mesopotamian Astrology 1995). Greek diviners are assessed with reference to Delphi's fees - but not its proverbial greed (101); key stories about rewards for seers are missing (e.g., Teisamenos and Sparta, Hdt. 9.35.1); finally, there is no discussion of the fees for haruspices outside Rome. Whether this section is meant to create an abstract or culturally specific notion of status is unclear; neither is achieved.

Other arguments are similarly ingenious - but hard to follow: e.g., Beerden asserts that, in Greece, cultural objects were not favoured for divinatory purposes, and illustrates this with examples of (cooked) food (118-121). The use of flour for divination, she asserts, does not undermine this argument, because, although milled, it's not cooked. Similarly, the fish of Herodotus 9.120.1-5, we are told, are not yet cooked, so count as 'part of nature' - Beerden does not mention that her translation describes them as dried. Nor does she explain how dice oracles or mirror oracles fit the argument against use of cultural constructs. More confusingly, having emphasised natural, visual signs in Greece, Beerden goes on to state that auditory signs were preferred (123); this then becomes a 'relative' preference 'in addition to visual signs' (124), as Homer and Pindar are taken, without qualification, to indicate that the wealthy used ornithomancy and extispicy (123; and despite earlier discussion that everyone knew a bit about how to read a liver, 56). Finally, the argument that the distinction in divinatory approaches between the cultures turns on differences between oral and written cultures has been made elegantly by Manetti to which a reference is needed (124-5).

Sometimes, as this suggests, evidence is clumsily employed. Questions of genre are overlooked (e.g., a passage from Aristophanes' Birds lacks reference to its comedic quality, 118; Teiresias in the OT is simply 'depicted as a divinatory fraud ... out to make a profit', 97). Analysis is too limited: e.g., Beerden does not tell us how remarkable is the letter by Urad Gula (an exorcist) to the king - even apparently threatening him (100); she asserts that the Pythia's words must have been translated, but does not engage with Maurizio's arguments (71 n.80, 159). Detail and nuance is replaced with sweeping statements: despite her own warning that the corpus of Dodona questions 'might not be representative of all of Greek divination', Beerden quickly starts using this material to make statements about 'the Greeks' (161; e.g., 169, 186). She asserts a limited timeframe for Greek divination in the face of conflicting evidence (185-6, cites Lhôte 111, but misses 8a and 82). Her statistical analysis of the tablets does not include the important proviso that what we have is a fraction even of what has been found, making her ensuing deductions about Greek divination, a tendentious claim anyway, even shakier.

Elsewhere, evidence or sources are missing: e.g., in discussing justice and divination with regard to Greece, Beerden makes no mention of oracles and law codes - as a result, Mesopotamian divination's links to law-givers appear remarkable (34). (See also: private experts treated with skepticism, 99; some suggest alternative Roman traditions, 151; some suggest Dodona lamellae were buried, 166 n.90; time horizons of around one year in epigraphical sources, 186). Where other authors are cited (e.g., Reiner above) readers should be cautious with Beerden's account of their arguments. This is also true of her treatment of ancient Greek religious phenomena more generally: e.g., brief discussion of the 'embeddedness' of religion cites 19th century work on fossils, and reporters in a war zone, but not R. Parker's adoption of the term from economic theory (32).

To use a favourite phase of the author, 'in a nutshell' (120, 121, 132, 146, 225), this volume provides a broad overview of some approaches to divination in these different cultures, indicates some interesting angles, and provides a helpful index of some of the secondary literature (although not of primary sources). But discussions miss crucial (and often well-known) points - and for that reason this cannot be recommended for student use. In the end, the conclusions drawn throughout the book - among them, e.g, that the Greeks were looking for hope, whereas the Mesopotamians were looking for knowledge (221) - offer only insufficiently supported generalisations.