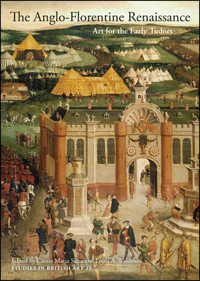 Renaissance is notoriously hard to pin down both chronologically and geographically. Depending on how one defines this era, diverse places and periods come to mind. According to the main defining influence - whether it is the classical tradition or artistic, religious, political and scientific lines - the epicentre of the Renaissance can be located in Florence and many other places, for example the southern kingdoms of the Iberian peninsula or the European North-West. In fact, we are still used to a view of the Florentine Renaissance, the Northern Renaissance, even of a Carolingian Frankish proto-Renaissance, mostly along national lines. Sixteenth-century history is too often taught at school with Charles V being rather boringly misrepresented as a "German" emperor, when he was really a cosmopolitan ruler of a multi-cultural empire.

In particular the kingdoms perceived for so long on the periphery of Europe and the Renaissance, such as Spain and England, have finally become the focus of pivotal Renaissance studies conducted by a number of scholars who can appreciate a Mediterranean as well as an Atlantic approach to what happened in Europe and in the countries of different new worlds, both East and West, during the Age of Exploration. These two realms shared for a long time the effects of neglect by Renaissance historians of art, culture, science, religion and politics, for they were seen literally as on the edges geographically and as too influenced by religion - whether Catholic or Reformed - to be part of a mainstream Renaissance culture, once perceived as mostly in the classical tradition if not outright lay or even neo-pagan. Such ideas have been revealed as erroneous: religious reform, be that in the guise of successful northern Reformations, be that in the form of more hesitant southern attempts at reform and of a - occasionally nuanced - Counter-Reformation, are now seen as irrevocably intrinsic to the Renaissance in its many local manifestations.

That the Renaissance, however we wish to define it at the end of the day, was at once a global and a local phenomenon is without doubt. Courts, banks, merchant enterprises, universities and institutions showed an awareness of what happened in other parts of the world. Maprooms, such as the one in the Florentine Palazzo Vecchio, not only displayed globes and astrolabes but also maps from four continents and objects to match. England and her reform under the Tudors may have been far away but the map of the British Isles by Egnazio Danti attests to the familiarity and many bonds of trade, business and even friendship that tied Italians to the Northern kingdom. Information flowed in both directions and particularly important events, such as the return of England to Catholicism under Mary Tudor, were celebrated in Florence with a great tolling of church bells in the city. Conversely, the Tudor court under all its kings and queens would have been well-informed about developments in the South, not least during the long-winded negotiations under way to solve Henry's Great Matter by an annulment of his union with Katherine or during Philip's marriage to Mary, and such knowledge may have caused considerable curiosity among the English who had, far more often than is perhaps assumed, travelled to the Continent and had even studied at European universities, in particularly at Padua.

Therefore, a conference such as the one held at Villa I Tatti in 2007 on Anglo-Florentine relations in the fifteenth and sixteenth century was both apropos and welcome in order to bring down old boundaries and to recognise the importance of a number of Florentines for the Tudor court and the interest of Henry VII (who had spent much of his youth outside England) and his successors in the cities and culture of the Italian peninsula. The eleven chapters of the present book accordingly concentrate on actual people travelling back and forth, even though the one person we owe for most of our knowledge on Florentine artists working in England, Giorgio Vasari, never actually went there in person.

Very interestingly, the authors' focus on a rather peculiar range of products, i.e. tombs, sculpture, military engineering (Maurice Howard) and civil architecture (Martin Biddle) for which Italian artists and craftsmen were particularly renowned. The first chapter by Stephen Gunn sets the scene, politically and socially, for an exchange of people, money and goods from which the Italian States were going to profit as much as the English kingdom. After which an array of English-speaking and Italian scholars (Alan Darr, Louis Waldman, Benedetta Mattucci, Francesco Caglioti) investigate the Tudor cultural politics which brought Pietro Torrgiani and Benedetto da Rovezzano to Westminster for major commissions such as the Royal tombs. In fact the elaborate tomb monuments created for the Medici both before and after they were ennobled, were imitated by their European peers: diverse German and Danish princes, for example at Freiberg and Roskilde, imported Florentine artists such as Carlo di Cesare over the course of the sixteenth century, even though they really wanted, Giambologna.

The concentration on tombs and worries about the afterlife may seem like too much of a good thing but religion, obviously, plays a major role in all types of relationships investigated in the essays. Henry VIII was keen to have a title from the pope that rivalled those of "Catholic" and "most Christian" held by the kings of Spain and France respectively. If we still see the letters FD on every pound coin today, this is the result of a religious policy that attacked Lutheran Reformation in Germany with treatises and pamphlets composed by the English king who was helped by his main theologian advisers. Cardinal Giulio de' Medici who was going to give Henry VIII such a hard time over his "Great Matter" had been cardinal protector of England, selected by Henry himself. In Sheryl Reiss's elucidating chapter we learn about the manifold examples of collaboration and appreciation between the two Medici popes and Henry who saw each other as men of culture and fellow bibliophiles as the lavish production of presentation copies of Henry's Assertio clearly shows. No wonder, Henry expected after the election of Giulio as pope Clement VII to continue his former excellent relationship with the Papal States.

Beautifully presented and richly illustrated, for example with a number of reconstructions of the designs for the particularly over-the-top tomb for Henry VIII in the chapter by Giancarlo Gentilini and Tommaso Mozzati, this book zooms in on one of the most important events of the High Renaissance. Religion affected far more than the ways in which people prayed; it was always political as well and as the events of the sixteenth and seventeenth century were going to show could become literally a matter of life or death. Religious wars were going to tear Europe apart for nearly two centuries, creating new alliances and quite a few new enmities between the leading families and even among the population of European countries. Not to forget that much of the politics were heavily influenced by the church, and not only along diplomatic lines, in a kingdom that had bishops sitting in the House of Lords. Both Wolsey and his creature, Thomas Cromwell, had experienced Italian culture, architecture and learning and were trying to import as much of it as possible to the English realm. Wolsey's Hampton Court Palace is said to have been designed along the tenets of Italian palace architecture and of the household rules fit for a cardinal as exposed in De Cardinalatu.

Hence, the image that emerges from the essays in this book attests to a rich and varied, sometimes complicated but most of the time fruitful relationship between Tudor England and Medicean Florence: Henrici-Medici, indeed.