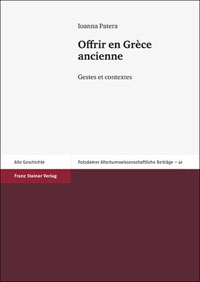 There are few books in classical scholarship that combine balanced analyses of literary, archeological, and epigraphical sources, and such virtue is even rarer in doctoral dissertation. This is one of those exceptional instances, since Patera's study on religious offering in ancient Greece competently uses these kinds of sources, along with sound anthropological theory. Hers is an enlightening book, not only to understand a central dimension of Greek religion, but also as a paradigm of methodological soundness.

The book is composed of five chapters, the first two primarily focused on literary sources and the second three mostly on the reconstruction of rituals in local sanctuaries.

Chapter I studies the Greek names of the offerings, since none of them has an unambivalent translation to modern languages. These names, on the one hand, point to the religious occasion in which it takes place, and on the other hand, they refer to a specific aspect of the offering: for instance, agalma means both "statue" and "gift which causes great pleasure"; euche, "prayer", can sometimes be reified in a material object which represents the vow. Special attention is paid to aparche (primal offering) and to hiera (sacred things), since these terms offer the occasionto dwell, respectively, on the offering of the firstlings, and on the so-called rites of desacralisation, which do not correspond, as it is widely believed, to the term hosion.

Chapter II deals with the relation that the offering aims to establish between donors and addressees, i. e. men and gods. Patera shows that the simple paradigm "do ut des" must not be mechanically applied by taking the offering as a contract that imposes an obligation upon the god. Rather, it is a mutual relation of appreciation (charis) that is created and cultivated through permanent offerings, which show the essential assymetry between both poles - gods can suspend their favours and are free to grant the demands, but men cannot stop offering. In these two chapters the approach is mainly synchronic for the whole of ancient Greece, i. e. Homer is used side with side with Porphyry. It is often left to the reader to differentiate the variations that undoubtedly existed along time and place, both in terminology and in meaning of the offerings. However, Patera does not aim to build a new general theory of religious offering, but to show precisely how each case may be differently evaluated, and this is effectively accomplished.

Chapter III inaugurates the treatment of the archeological sources, in which the study of the great special sanctuaries like Olympia is deliberately avoided to focus on the "day to day" piety (or rather, forms of piety) showed in smaller cult centres, in which specific rituals can be reconstructed. It focuses on the procedures of offering, how and where objects were deposited (tables, seats, wells), and particular attention is paid to the rites of foundation.

Chapter IV focuses on the different roles of the altar in the treatment of the ritual offerings: altars can be used as tables on which to deposit offerings, or as fireplaces where they will be burnt and consacrated. Within this main functional division, there are many posibilities: statues could be burnt and "sacrificed", as in vegetal or animal sacrifices, while in other cases durable objects could go through fire and not be consumed but transmitted thus to the gods.

The fifth and final chapter studies the various types of deposits in sanctuaries, those dedicated to offerings and those for sacrificial rests - none of these easy to distinguish from rubbish deposits or just remainders of rituals. The specificities of various deposits called in the sources bothroi and megara are discussed, with cautious respect to local differences.

This brief summary does not make justice to the richness of topics treated in the book, which are interesting for all students of antiquity, not the least because of the many traditional theories which are nuanced or simply proved untenable. For instance, the inalienability of the goods offered is not valid at least for metallic objects which were reused for secular purposes after their dedication (83ff.); offering is directed to the gods and cannot be generally interpreted as a variant of potlach, i. e. as a channel of social concurrence (96ff.); the use of Dionysism as a loose category to explain any sacrificial obscurity is critisized (157); sacrificial fire is an instrument of transmission to the gods and has little to do with annual solstice celebrations (171ff.); "chthonian" can be used generally as linked to the earth, not as a separate ritual category neatly opposed to "Olympian" (203ff.).

On the other hand, specific problems of more than a dozen of particular sanctuaries are illuminated: to name only three of the most well-known examples, the pyres of Heracles' sanctuary in Oeta (171ff.), those of Eleusis (180ff.), and the ritual deposit of piglets (megarizein) of Athenian Thesmophoria, mentioned by disparate sources, is thoroughly analysed (231ff.).

Granted, many of these methodological issues and local sanctuaries have been widely discussed elsewhere, but Patera integrates the bibliography in a synthesis study which had not been attempted since 1902 (W. H. D Rouse, Greek Votive Offerings, Cambridge). More than a century later, scholarship on Greek religion does not tend to sweeping general theories, but to careful analyses of specific instantes from a diversity of perspectives. Both archeologists and historians of ancient religion will profit from this well written book, which honours Aristotle's opinion that "general statements have an easier application, but the particular cases have a higher degree of truth" (EN 1107a29).