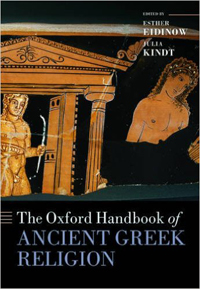 A synthetic handbook on Greek religion used to transmit an accomplished vision of Antiquity by a single great scholar: In the 20th century, Wilamowitz (1931/2), Boulanger / Gernet (1932), Nilsson (1941), and Burkert (1977) produced systematic presentations of the whole field that remain scholarly landmarks. Along with their (now largely outdated) personal views, they also provided a solid body of primary and secondary references, for both beginners and researchers. Two decades ago an array of new, more basic handbooks intended for undergraduate students emerged: Bruit Zaidman / Schmitt Pantel (1991), Bremmer (1994), Price (1998), Mikalson (2004). By contrast, books addressed to a specialist audience have tended to present selective views "on Greek religion" (the cautious title of Parker 2011) or to propose new ways of "rethinking" or "understanding" it (Kindt 2013, Larson 2016), through sophisticated case studies rather than overall syntheses. The intermediate gap between both levels has been occupied by multi-authored reference works with expert articles that offer overviews on specific topics, like the Thesaurus Cultus et Rituum Anticorum (2004-2014) and the Blackwell Companion to Greek Religion (2008).

It is to this last group that the Oxford Handbook of Greek Religion belongs, in spite of its name. On the one hand, the volume is explicitly oriented to graduates and researchers. On the other hand, it addresses "crucial developments in the study of ancient Greek religion, with a special focus on problems and debates" (1). This implies that some basic topics will be omitted - which is fine insofar as the criteria for the selection are clear. Informed scholars who have read other works by the editors will probably guess that their acknowledged aim to move beyond the "polis religion" paradigm, which, as they rightly say (1), informed many of the aforementioned handbooks, explains some of their choices - but only some.

To offer a basic example, once the polis model has been set aside and the Hellenistic world becomes easy to integrate within the dynamic Greek religious system, why does the handbook still largely exclude (besides a few specific chapters) the Greek religion of Imperial times? Doubtless, there is some good reason for keeping this traditional boundary with the Roman era, but it remains opaque to the reader. Remaining with diachronic issues, if long-discussed problems in the field, such as how Greek religion relates to that of ancient Indo-European cultures, or to Christianity, are carefully avoided, while the contrast with Chinese religion takes the last chapter, the reader wonders what idea governs these choices, beyond their being more or less fashionable. In a volume that claims to be not a mere collection of papers, but wants to address "the ancient Greek relationships to the supernatural - in all their variety" (1), the introduction delineating the subject matter, rationale for selection, and organization of themes, should have been longer than one and a half pages.

The volume is very ambitious in scope: 43 chapters (grouped in 9 sections) by leading experts in each of the fields that are covered. A look at the table of contents gives an idea of the impressive gathering of authors and subjects in this book. Most chapters share the same structure: an introduction to the topic with a brief history of scholarship and a summary of the main current debates, followed by some case studies in which the previous theoretical reflections are applied (one sometimes misses an explanation of why the case studies are considered representative), suggested readings and a bibliography that naturally privileges works in English. There are no footnotes, and limited citations of primary sources. The editing work has been well executed, with few errors: only one reference to a later section which turns out to be the present one (265) reveals how much hurried text-re-shaping inevitably underlies collective volumes of this kind. Cross-references are abundant and helpful. The final index prioritizes names of scholars over issues, which could unwillingly caricaturize research more as a matter of petty debates between academics than as discussion of sources and interpretations.

The first section, "What is Greek religion?" encompasses four chapters that establish crucial categories for the general comprehension of the Greek religious system, presenting them as dichotomies: unity versus diversity, belief versus practice, old versus new and many (gods) versus one. Ch. 1 recuperates the Greek term "theology", until recently banished from the field as Christianizing, as a useful way of categorizing the variegated discourses on the divine. Likewise, ch. 2 rightly vindicates the term "belief", since a way of projecting Christianity backwards into Greek religion is precisely trying to construe the latter in opposition to (an archetypical version of) the former. Ch. 3 reminds the reader of the subtle balance between continuity and change in an "essentially traditional system". Ch. 4 dwells on the language of polytheism, conceptualizing gods as "sets of connections not necessarily activated in each context [...] but potentially available" so that names, myths, and rituals "resonate inside the mental frame of poets, artists, and worshippers" (41-42). This whole section shows that diverse innovative approaches are currently making Greek religion a vibrant field of research.

The second section, "Types of evidence", is a survey of the various kinds of sources (visual, literary, epigraphic, archaeological, papyrological), which not only transmit to us different aspects of religion as a multidimensional phenomenon, but also construe it in different ways: for instance, ch. 7 shows well the central contribution of poetry in the creation and constant reshaping of religion for the Greeks. The third part follows this logic and dwells on the way in which the main literary genres and art interact with myth (ch. 12, where the selection of case studies of Athena is discussed in exemplary fashion). Epic and tragedy, including choruses, are dealt with so aptly that one misses a separate chapter on monodic poets. The chapters on history and philosophy manage to tackle complicated issues in a clear but innovative manner.

However, this careful organization of the first three parts seems to become looser in the following six, whose headings are not the usual substantives (space, time, agents, etc.), but apparently inquisitive interrogative pronouns: where?, how?, who?, what?, when?, and even an adverb (beyond?). Under this spell, one can only go on asking: why? Nowhere are we told the principles of such division, what it highlights and what it obscures. One wonders why there is no attempt to differentiate regional developments, at least in mainland Greece, Crete, Cyprus or Asia Minor. Or why healing deserves a chapter while war or travelling do not. Above all, one may ask why the gods are dealt with specifically (besides occasional case studies in different papers) in only two chapters which address two interesting but problematic topics which, as the respective authors stress, are not wholly adequate for approaching the gods: chapter 24 on the opposition Olympian / chthonian, and chapter 25 on origins. It might be justified that the individual deities, dealt with prominently in recent publications (e. g. Bremmer / Erskine 2010), are not treated here, but their absence should be explained somewhere. Few of the puzzles concerning the volume's structure are readily explained by the desire to move beyond the polis religion model. The only justification is that "it reflects the conviction of the editors that ancient Greek religion presents us with a complex subject" (7). But honouring the subject's complexity should entail avoiding the sensation that it can only be confronted with arbitrariness.

However, this lack of a clear plan after the third part should not serve as the final judgement on the rest of the volume, since the "interrogative parts" provide several very high quality syntheses of well-focused topics: e. g. ch. 18 on religion in communities offers a clear alternative to the polis-centred model; ch. 21 on impiety treats specifically Andokides, Anaxagoras, Diagoras and Socrates (there is clearly no randomness in these case studies); ch. 23 dwells on the so-called "sacred laws", a label that will be replaced in the future by "ritual norms"; ch. 26 on heroes is fortunately structured in a very different way from its pendant in the Blackwell Companion by the same author; ch. 29 on deification of kings shows in a few dense pages how "natural" this apparently novel phenomenon was for Hellenistic cities; chapters on religious expertise (14), prayer (30), oracles (32), epiphanies (33) and the afterlife (37) offer extremely readable syntheses of classic monographs on these topics by their own authors; particularly exciting is ch. 31 on sacrifice, where Naiden, focusing on aesthetics, sketches an alternative to Burkert's and Vernant's theories. As for the last part on religion in some particular regions outside Greece (again, why not Etruria?), chapters on the Bosporan Kingdom (a wider scope would have included the fascinating evidence from Olbia), Bactria, and China will appeal mostly to specialists, but those on Southern Italy and Sicily, Egypt, and the Near East are very interesting for all.

There is no doubt that many of the chapters in this book will provide the starting point in coming years for future discussions of their respective topics . As a whole, the volume is also useful as a guide to current interests, showing how fast the field has moved in the last twenty years and in what directions. To give one last example, the student of Hipponax interested in the pharmakos will find no reference in the indices, and if he digs further, only one line on page 268 and four lines in page 610. Not only will he understand that Burkert's fascination for scapegoat rituals as a crucial key to Greek religion is shared by few today, but he may feel compensated by many novel and shrewd observations on complexities, negotiations, identities, multiplicities, dynamics, etc. which he might try to apply to the Hipponactean fragments.

Overall, this book gives many adequate and updated answers to traditional questions and raises, as it should, several new ones about crucial matters of Greek religion. Alas, it also raises questions about why some issues are omitted or underrepresented. But there is no doubt about its quality or its utility. It will hold a central place in classics libraries for many years.