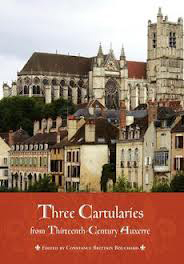 The later decades of the thirteenth century were a challenging period for many institutions in France, especially but not limited to monastic and cathedral communities. Following the death of King Louis IX, France was plunged into unwanted crusades, fiscal instability, and political scandals. The 1280s in particular was a time of reckoning. For most institutions this was accomplished through copying vast numbers of individual parchment charters typically kept in boxes and armoires into neatly ruled and bound quires known as cartularies. In ca. 1230, 1282 and 1291, as Constance Bouchard has shown, this is precisely what three religious communities in Auxerre did with their charters, leaving three well ordered if incomplete cartularies.

Thirteenth-century Auxerre was a thriving episcopal town of some distinction. It has also been the special focus of Bouchard's own work for over thirty-five years. It is thus a great gift that she has chosen to edit these three cartularies, as readers will benefit from her depth of knowledge of the individuals, geography and events referenced throughout. Bouchard brings together in this volume editions of "The Bishop's Cartulary" (University of California at Berkeley, Robbins MS 48), "The Cathedral Chapter's Cartulary" (Auxerre, AD Yonne G 1797) and "The Cartulary of the Nuns of St.-Julien" (Auxerre, AD Yonne H 1667). She begins with a short preface introducing the manuscripts, describing what is known of their production, and situating the reader in the ecclesiastical and social context of thirteenth-century Auxerre. There is just enough information to get one's bearings, but hardly enough to feel knowledgeable about this world. Much of the background needed to make good use of these texts is to be gleaned from Bouchard's earlier work and that of a handful of scholars cited in the notes, namely Yves Sassier, Guy Lobrichon and Noëlle Deflou-Leca. A cursory discussion treats the major local families who play a prominent role in the documents including the counts of Nevers and the lords of Mello, but one does wish for more details on all accounts.

Bouchard is at her best when describing the texts she has come to know so well. The bishop's cartulary in particular enjoyed a considerable migration. As Bouchard explains, it "was lost and assumed destroyed for nearly two hundred years, from the French Revolution to the late twentieth century" (4), only to surface in private hands. In 1974 the Berkeley Law School (Boalt Hall) purchased it for 5000 FF and for the last thirty years it has remained there, barely noted until the present edition. The cartulary is remarkable for two reasons: first, it offers insight into the bishop's rights and properties that are otherwise lost as the cartulary was one of a very few manuscripts to have survived the destruction of the Wars of Religion, when the bishop's palace and all of its records were burned; second, the cartulary is very explicit about what was copied and the system of organization that bishop's administration employed. Divided into nineteen different sections, labeled A through T, the cartulary reliably copied most of the documents contained in separate correspondingly lettered boxes or "scrinii," which grouped documents relating to shared topics, lands, rights, disputes or individuals. The cartulary thus reproduces what one might call a filing or finding system in place in the bishop's archives and offers tantalizing insight into the mechanics of management and administration. The topics covered in the cartulary are both routine and fascinating: box A (fols. 16r-22r) includes documents recording the settlement of quarrels between the bishop of Auxerre and the counts of Nevers; B (fols. 22v-25v) pertains to the bishop's right to be carried (portare) by members of the local nobility upon his consecration; C (fols. 26r-29r) records the obligations of homage owed to the bishop by counts and barons in the region. Other topics include the division of the archdeaconry of Auxerre into two, a decision reflecting the growth of the local parishes; the foundation of new chapels both for commemoration and to accommodate the growing population of the region; the creation of new parish churches at La Charité resulting from local suspicions of heresy; and grants of franchise to the men and women of Appoigny, les Bries and Bailly. The latter includes a tremendously long charter (spanning nine folio pages, fols. 37r-41r) detailing the partial manumission of forty-five of men and women under the bishop's authority in return for a fixed annual payment. The text is painstakingly specific and Bouchard suggests that the scribe got tired of copying such a long charter and had to stop in the middle and return after moving on to other work. Not all documents, alas, are copied in full and at several points throughout the cartulary the scribe noted simply "Item in eodem scrinio littera". Following the long manumission charter, thirteen such short notes are recorded pertaining to sales at Appoigny.

The cartularies of the cathedral chapter and the nuns' of St.-Julien are both much shorter records and more circumscribed in their contents. The chapter's cartulary contains only eleven texts dated between 1166 and 1230, most of which pertain to agreements between the chapter and the local nobility. The nuns of St.-Julien likewise copied only fourteen records into their cartulary and nearly all of these pertain to the disagreements they had with the nearby counts of Joigny. In this sense this mini-cartulary is a distilled record of dispute and resolution between the nuns and one family. One imagines that it was created in part to end the most recent quarrel of 1291, a disagreement that made continuing references to earlier accords, so having copies of those texts at hand must have been a useful if not necessary legal strategy. In both cases, although not much is known about these cartularies, Bouchard states that they were "doubtless" copied in 1230 and 1291 respectively, and that the latter was "doubtless" copied by a nun of St.-Julien. While all of this is certainly possible, I am not sure it is "doubtless". Many texts created for nuns in legal disputes were compiled and copied by male clerics working with or for them. Likewise, the selective nature of the chapter's cartulary implies that it was compiled for a reason, and possibly long after 1230, which is the date of the latest charter it contains.

Bouchard closes the volume with an annotated list of the bishops of Auxerre. There is also an appendix, which is in fact an edition of the "Inventory of Documents in the Episcopal Archives" that was appended to the bishop's cartulary in the fourteenth century and thus technically part of the same manuscript. This short source allows the reader to correlate the contents of the cartulary to the archive but also lists other texts that were never copied into the cartulary. Finally, three sparse indexes - of people, places and topics - close the volume.

Overall the editions presented here are of very high quality. The rendering of the Latin is clear, though at points Bouchard's decision to use the original medieval spelling of some words (retaining the c's for t's as was common usage at the time) may give some readers pause. I personally prefer this technique for rendering what thirteenth-century orthography actually looked like. At the start of each document she offers a summary of the text in English and notes the critical information regarding its publication, if previously edited, or what other manuscript and archival copies exist. A brief commentary follows each document explaining its relationship to others in the cartulary or noting when overlapping issues surface among different charters. Such interjections are quite useful. Compared to other editions that the University of Toronto Press and The Medieval Academy have published, however, the critical notes are quite short and occasionally repetitious. For example, each time the count of Nevers is referenced the editor has included almost the exact same note (see 177-184), which is a cumbersome choice. Although such things are costly, one wishes the volume included a few images from the cartularies themselves.

In all, these are minor quibbles that recede in the face of the great service Bouchard has accomplished in creating these editions. Such labors are done out of love and devotion to a place - Auxerre - and its people - especially the bishops and their kin who Bouchard knows so well.