Elizabeth Gemmill: The Nobility and Ecclesiastical Patronage in Thirteenth-Century England 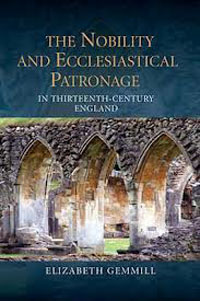 This is the first study of noble patronage in thirteenth-century England which combines parish clergy and monastic houses. The later years witnessed a struggle between a powerful king, Edward I, and a pope, Boniface VIII, trying to exercise his right to make appointments and to tax the clergy. Between king and pope, the nobility tried to maintain rights to nominate parish clergy and influence over monastic houses. The composition of the upper levels of the aristocracy changed considerably in the following the confiscation of lands resulting from the loss of the continental domains, and as a consequence of the baronial wars of the mid-thirteenth century. Not only were many families newly in possession of grants of lands, but they inherited patronage from their predecessors which were by this date more closely defined and restricted in law than previously. The author focuses on the higher nobility, defined as the earls and a few wealthy lords who had rights of patronage. She is not concerned with the rest of the aristocracy, or with lay piety as opposed to patronage.

In six chapters the author sets out to define patronage rights and to see how they were exercised, and for whose benefit. It is clear that many nominations to parish livings were in favour of members of the patrons' families, or of their key administrators. The lucky few were granted multiple benefices, sometimes without being ordained at the time of their nomination. Lords' officials were key in notifying their masters when vacancies arose. Two chapters consider in detail the politics of Edward I's reign from the perspective of the lay nobles. These were men who in many cases were associated with the king's wars and consequent demands for money. They also needed to be vigilant in case their claims to nominate parish clergy were challenged by royal officials. Edward's reign saw a notable upturn in aggressive investigation of royal rights of presentation, and increasingly care was taken when grants of estates were made to specify whether or not rights of presentation were included. The author demonstrates that their rights of patronage were not much affected by papal rights of nomination in the way that the king's were, because the pope chiefly appointed to the top jobs in the English church. Of greater immediate concern were Edward's attempts to prevent revenues from the English priories of French houses from leaving the country.

Individual nobles intervened in specific cases to help houses with which they were particularly associated. So far as taxation of the clergy was concerned, the author argues that this was essentially a quarrel between the king and the pope, though the nobility's support for the confiscation of clerical property was mobilized in parliament. The book ends with two appendices, one of hitherto unpublished documents relating to patronage rights, and the other a list of magnate presentations to parish livings.

The author deals competently with her technical source material, and writes lucidly. In the final chapter she branches out to consider how ecclesiastical patronage was changing in the thirteenth century. Nobles on the whole saw their rights of presentation to local churches as patronage. The spiritual needs of themselves and their households were often fulfilled by the use of portable altars, or private chapels, rather than the parish church. Those who in the eleventh or twelfth centuries might have founded abbeys, priories, or houses for women, were now endowing chantries with priests who would pray for their immortal souls. Some were supporting poor scholars at Oxford. One example is that of Devorguilla, widow of John de Balliol, who devoted funds to Balliol College. Others like Simon de Montfort earl of Leicester were attracted to the friars. Few could afford to found abbeys, even if they so wished. One who did was Richard of Cornwall, king of the Romans and brother of King Henry III of England. Richard founded a Cistercian house at Hailes in Gloucestershire, to which his son Edmund gave a precious relic of the Holy Blood which he had bought in Germany in 1270. An image of the cloister of Hailes is on the front cover of the book.

Behind the somewhat dry squabbles about rights of presentation there are stories of living people and their hopes. We could perhaps have heard more of the great pluralists such as Bogo de Clare or Adam of Stratton. Bogo was the third son of Richard de Clare earl of Gloucester, and at various stages held more than thirty benefices together with cathedral prebends. He was the friend of kings, and lived like a prince himself. Adam's career was even more colourful. His enormous wealth came partly from his benefices and his exchequer office but also from moneylending. Eventually the complaints about his behaviour became too strident to be ignored. He was tried twice for felony and the cash found in his house was confiscated. It must be borne in mind that the noble families studied are a select few of the English aristocracy, not even the full complement of earls. The great Simon de Montfort earl of Leicester, for example, is referred to only in passing. One problem is the uneven survival of bishops' registers, as well as the conscientiousness of individual bishops. It would have been good, therefore, to have read more about context. One variable is the differing size and value of parish livings, from the many small livings of East Anglia to the great parishes of the north. Another is about the kinds of men appointed, especially in relation to the patrons from middling lay families, or ecclesiastical landlords. The author has been circumspect in defining the limits of her study, and within those limits she has provided a careful and informative discussion.