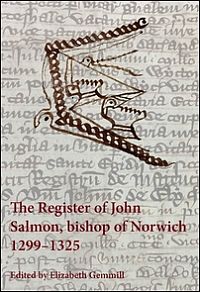 The edition is of the earliest surviving bishop's register from the diocese of Norwich. It is, perhaps surprisingly, only the second medieval register from the diocese to receive a scholarly edition. This is despite the importance of the diocese in the period, covering most of the counties of Norfolk and Suffolk, and both prosperous and densely-settled. John Salmon, the bishop from 1299 to 1325, was himself a major figure of the early-fourteenth century. He was formerly a Benedictine monk and then prior at Ely Cathedral. As bishop he was highly active in the service of Edward II from 1307, serving as chancellor between 1320 and 1323. Despite this, and the time it necessitated away from his diocese, he does not appear to have attracted contemporary criticism, and the slight picture received from chronicles of the early fourteenth century is of a competent administrator.

His surviving register is predominantly a record of institutions to benefices and offices. There are indications that this was only one of the main episcopal registers kept at the time, with references to records of appropriations, visitations, and other episcopal business kept in other, now lost, registers. Some entries include the circumstances surrounding contested elections or institutions, but from the archiepiscopal registers and other evidence it is clear that these were not always recorded.

Previous attention from antiquaries and historians has been to mine it for names to attach to local and institutional histories, and this was almost certainly how it was designed to be read. The entries in the register are presented for the most part chronologically, with no regional subgroupings or other subdivisions by type, but almost all had marginal finding-aids of the name of the benefice and other information. The edition follows the original manuscript, albeit with some minor corrections to the foliation. The entries are an apparently-complete record of institutions and appointments, with no obvious gaps. Many seem to have been entered contemporaneously with the act of institution. From a handful of entries it is possible to glean details of the apparatus of diocesan administration, such as the usual two or three weeks it took to progress from the receipt of letters of presentation to the institution itself.

Elizabeth Gemmill argues in the informative introduction to the register that the picture painted by the entries is of a conscientious bishop keen to ensure clerical standards of education, ordination, and residency within his diocese. From the inconclusive name and nomination evidence pluralism appears to have been more rife than suggested by grants of dispensation, but may have been made necessary by the proliferation of small livings in the diocese.

It is undeniable that the material of this register is the stuff usually of interest only to local historians but Elizabeth Gemmill's introduction makes a strong case for why we should closely analyse these kinds of sources. The landscape of patronage within Norwich diocese was comprised of many individual patrons, most with only a handful of benefices. The main individual patrons were predominantly ecclesiastical figures and institutions including the bishop himself and Norwich Cathedral, the abbot of Bury St Edmunds, and the bishop of Ely.

The bishop of Norwich, 'pleno jure' or by custom, nominated to some benefices in the diocese that were in the gift of ecclesiastical institutions, but the introduction does not make it clear as to why or whence it arose. Since at least the late-twelfth century, as the Episcopal Acta for the diocese show, the bishops of Norwich had included their right to nominate as a condition of the appropriation of benefices, particularly of those with larger livings. Given the enhanced patronal power this afforded the bishop it would have been worth exploring. As the introduction notes, both personal and political episcopal familia were heavily dependent on the bishop's exercise of his patronage in nominating to benefices.

The Earls of Norfolk and the Crown were major lay patrons as might be expected, the latter entirely through regal rights and wardships. Yet it was the sub-nobility, from knights down to burgesses, who constituted the largest group of patrons, nominating almost 40% of all the institutions in Salmon's episcopacy. Women made around 15% of lay presentations, mostly by right of dower, pointing to considerable female property ownership in the diocese at this time.

The introduction does not delve into the possibilities of utilising more thoroughly the abundant name evidence here presented. The vast majority of the personal names of presentees are of the place-name type or include place origins (e.g. William de Eccles juxta Bromholm). This indicates that there is a reasonable correlation between the people in the register and their place of origin, as typically place-names comprise less than a third of hereditary surnames. Much good recent work, including by Elizabeth Gemmill, has used such orthographic and prosopographical evidence to build up a picture of the character of the clergy in particular patronal circles or dioceses. The edition of this register is surely an invitation to more such rewarding analysis on this front.

The register is diligently calendared, with 2675 numbered entries and a full index. A thorough itinerary of Salmon's movements is provided as an appendix. Place names throughout are given in their original spellings and modern renderings. Footnotes throughout contain a wealth of local detail and point towards other source material. Somewhat frustratingly there is no map of the diocese provided, and those unfamiliar with the local geographies of Norfolk and Suffolk will thus have to expend some effort to site any of the entries.

This is a fine addition to the venerable series of registers published by the Canterbury and York Society, diligently edited and indexed. It is certainly, in its long litany of institutions to benefices, more than the sum of its parts, and historians of medieval ecclesiastical life dismiss such material their peril. As Elizabeth Gemmill rightly states, ensuring that churches and offices were properly staffed was "the heart of the work of the medieval bishop" (xv). This edition should lay the groundwork for much future analysis.