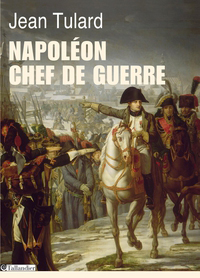 Over a career devoted to the study of Napoleon and the Empire, Jean Tulard might seem to have written about every facet of the Emperor's life. Throughout, he has made no secret of his admiration for Napoleon and his vision of empire. Yet, perhaps surprisingly, he has not previously written a book that offers a considered verdict on Napoleon as a strategist and military commander. Here, at last, we are presented with his thoughts in a single coherent volume which offers crisp, unambiguous assessments of Napoleon's qualities in war.

The subject in itself is not, of course, new: Napoleon's strategy, tactics and mastery of operational art have been the subject of analysis by historians, men of letters and specialists in military education from the time of the Empire itself, and his much-vaunted genius as a military commander has found visual expression in many paintings and lithographs from the early nineteenth century down to our own times. Clausewitz was only the most famous of many military strategists to acknowledge his influence, whilst French officer-training at Saint-Cyr continued to preach Napoleon's cult of the offensive and use his victories as exemplars of the art well into the twentieth century. Indeed, even after 1918 we find Foch declaring himself indebted to the lessons he had learned from Napoleon's campaigns, and especially to his ideas on offensive warfare. It was not until the Second World War, a war characterised by advanced military technologies and settled by the atomic bomb, that the relevance of neo-Napoleonic teachings was seen to have diminished.

This book presents a vigorous assessment of Napoleon as a military leader, an assessment rooted in recent histories - his own studies included - as well as in the historiography of a more distant past. The result is lively, readable and thematically structured, as Tulard examines Napoleon's preparations for war, his management of the battlefield, and the reasons for his final defeat. It is not all about fighting, as he strays from the battlefield to discuss such key questions as military intelligence and logistics, the administration and the financing of war, peace-making, and the treatment of prisoners. He also provides fascinating insights into Napoleon's use of maps and cartography when planning a battle, and discusses espionage and communication (the area that arguably proved most wanting at Waterloo). In short, Tulard offers his readers a broad conspectus of Napoleon's military policies, going far to explain how the Emperor succeeded, across long and enervating years of war, to retain the support and loyalty of his men and even to build bonds of affection with them.

The verdict - as we have come to expect from Tulard's oeuvre - is favourable to Napoleon, whose military genius he does not question and whose detractors he treats with a certain disdain. Napoleon's critics get pretty short shrift, indeed, whether it be those who dispute his judgement in battle, who allege that he was too wasteful of human lives, or who suggest (absurdly, in the author's view) that the mere fact of winning does not necessarily imply any special qualities, any military genius on his part. Napoleon is unquestionably the hero of this book; and the discussion of his strategic and tactical qualities is precise and convincing. But on more general social questions he can, I feel, protest a little too much. Take the cost of his wars in human lives, for instance. Are the figures that circulated in the last years of the war, which have been largely appropriated by historians since, really so exaggerated, the product of royalist malice, as he suggests? Tulard implies that the true figure for deaths in these wars is far lower than the 'million men' so often cited. But what of the many who died between battles, on forced marches, or in fever hospitals? Or those who returned wounded and mutilated, unable to find work in civil society? Do we really know with any accuracy the number of victims?

The same is true of social and economic questions. Mass conscription, he asserts, did not do serious harm to industry and agriculture, arguing that the relative shortage of manpower resulted in higher wages in large sectors of the economy (it also brought more women into the labour market). This may be true in the short term. But it seems somewhat over-optimistic when viewed in a longer perspective. French industry emerged from the war seriously undercapitalised; France had an ageing population and was burdened by large numbers of former soldiers who were never able to work again. And a country that had, before the Napoleonic wars, been a genuine competitor to Great Britain in the industrial field found itself condemned to watch on as Victorian Britain became the unchallenged workshop of the world. Britain, as Napoleon himself believed, was France's real enemy in these wars, her adversary in those areas (economic warfare, naval warfare and colonial competition) in which France ran out second-best. It was his determination to crush Britain that explains so much about Napoleon's decline: why he tried to impose the Continental System on his neighbours, why he invaded Russia, and why, finally, he lost.

The reader will learn a great deal about the French army from this book, its structures and values as well as something of the day-to-day experience of Napoleon's troops. It helps explain how France could continue fighting, campaign after campaign, taking on seven coalitions of European powers between the first declaration of war in 1792 and the final defeat at Waterloo. It goes far to unravel Napoleon's psychology, too. The text is enriched with carefully-chosen quotations from his writings and speeches, explaining his views on such diffuse issues as the value of music to an army, or the need for propaganda as well as gunfire (arguing in this case that 'it is not enough for a commander to win, he must extol his victory'). The focus is on one man, and the book is at its best when it deals with his ideas, his strategy and his tactics. On some more general issues one might quibble. Perhaps there is a risk of exaggerating the impact of German nationalism when explaining the strength of the Napoleon incurred at Leipzig, for example, at a time when men's loyalties were still to rulers and states; and one might question whether guerrilla fighting in Spain really developed into a 'people's war'. But these are subsidiary issues. The thrust of the book, and its strengths, lie in what it says about France, and especially about Napoleon.