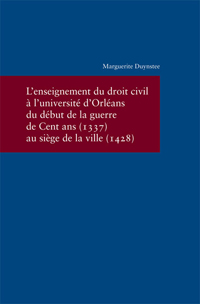 Most scholars of the Middle Ages know about the importance of the Italian universities, especially Bologna, to the study of canon and civil law; fewer are aware of the contributions of French universities like Toulouse and Orléans. Marguerite Duynstee's L'enseignement du droit civil à l'université d'Orléans is a substantial work of scholarship that illuminates the history of the Faculty of Civil Law at the University of Orléans from the early fourteenth to the early fifteenth century. Based on her 2010 doctoral thesis for the University of Leiden, the book aims to provide for the fourteenth-century university the kind of serious analysis that has already been established for legal studies at Orléans in the thirteenth century (5). Nineteenth-century scholars of the history of the medieval university, such as Heinrich Denifle and Marcel Fournier, had recognized the importance of the legal schools at Orléans and included them in their histories (1-2). However, it was the work first of Eduard Maurits Meijers and then of Robert Feenstra and his students that really focused research on legal studies in the thirteenth century at Orléans, when their reputation was at its highest. This study builds on their efforts.

Marguerite Duynstee's book has five main parts. Its first chapter provides an overview of the history of the university from its beginnings until the fifteenth century, as well as a discussion of the organization of the university, the arrangement of the teaching of civil law and its texts, and a shorter discussion of the teaching of canon law. The author then devotes a chapter to each of four prominent masters in civil law at the time: Jean Nicot (Johannes Nicoti), Bertrand Chabrol (Bertrandus Caprioli), Géraud Bagoilh (Geraldus Bagoli) and Jean Noaillé (Johannes Noailles). In each chapter, Marguerite Duynstee discusses the master's studies, his professoriate and further career when relevant, the master's "entourage" (the professoriate at the time of his studies), his colleagues, his students, and his works and influence. These four masters were chosen because of the availability of sources about them and because their careers had not already been substantially treated by others (6).

For those interested in a general introduction to the famous legal faculty at Orléans, Marguerite Duynstee's first chapter provides a fine introduction. She explains how the schools rose to prominence under the city's bishops in the thirteenth century and then sought the status of a studium generale in the fourteenth century from Pope Clement V (9). The resulting changes in privileges accorded to the masters and students disrupted relations with the city's citizens, who appealed to the king. Much of the university's subsequent history was shaped by town-gown disputes, as well as by the Hundred Years' War and the Great Schism. The university itself was modeled on Toulouse, another school famous for its legal studies and one which differed from both Bologna and Paris in having only one universitas that comprised all the doctors. The faculty of civil law was by far the most important one, and Marguerite Duynstee explains how students entered the program of study, the courses they took and the duration of studies, and how they could become professors themselves. Finally, she follows up this section with a very brief discussion of the Faculty of Canon Law (54-57).

The main body of the book consists of what Marguerite Duynstee terms "bio-bibliographies." These chapters reflect a huge amount of research on her part, as often existing knowledge of her subjects rests only on stray references in university statutes, rotuli addressed to the popes, and records at cathedral and city archives; rarely can she flesh out much beyond simple statements of position or citation. This is not to say that that her work is trivial; on the contrary, it represents a huge advance on what has been known about these university professors and their circles, but the picture obtained is necessarily limited. She also lists all of her professors' known works.

Her research allows her to note that in the first half of the fourteenth century, the professors at Orléans rarely taught more than a few years, as from the beginning the schools of law at Orléans were a springboard for those wishing a career in the ecclesiastical or secular hierarchy (59). Most went on to other careers, especially in the Church, with several becoming bishops or canons in churches around France, or becoming a judge or member of Parlement. She notes that there were at least nine cardinals in the fourteenth century with ties to Orléans (252). It was also possible to have other career trajectories, as one professor was a diplomat working on a peace accord between England and France. Unlike their counterparts in legal faculties in Italy, professors who taught for almost their entire careers in the early fourteenth century were rare. Even those who did teach for a long time did not always intend to do so. Pierre de Belleperche, for instance, said that if he had known he would remain at Orléans for so long, he would not have stayed for a thousand pounds! (59) After 1350, more of the professors began to see teaching as a career in itself, and most of the surviving works that she studies originate in that period (253-54).

Some of these teaching materials form part of the eleven appendices included with the book. These consist of short editions of Questiones de retractu, and various lecturae on Justinian's Code, the Digest, and on the Libri feudorum. The latter constitute another contribution to the scholarship on Orléans, as it was long thought that feudal law was not taught there (123).

In terms of the scholarship produced at Orléans, Marguerite Duynstee notes that the quality of the work and teaching probably never again reached that of the thirteenth century. She takes issue with the view of Eduard Maurits Meijers that the level of the school of law did not recover after its secession to Nevers in the 1320s until after 1350, stating that there were a number of well-regarded professors before 1350 and that the ones teaching after 1350 were not so good as the thirteenth-century professors. She also notes that the works of some of these professors were quite influential in Germany and sometimes even in the Italian schools. The one obvious difference between the professors at Orléans and their Bolognese counterparts was in their attitude to the Gloss of Accursius, which the French professors held in some disdain (256-58).

Marguerite Duynstee's L'enseignement du droit civil à l'université d'Orléans thus accomplishes her goal of filling the hole in the scholarship about legal studies at Orléans in the fourteenth century. It will benefit serious scholars of the history of the university and of late medieval legal studies. Researchers of late medieval education will be happy to see a work that addresses this period, as so much of the research on medieval universities has been aimed at the twelfth and thirteenth centuries. It is also beneficial for legal studies at Orléans in this period to be examined, both because Orléans was such an important legal center and because the faculties of theology at various universities have so often absorbed the attention of researchers. Law was clearly the focus of many medieval students' ambitions, being seen then, as now, as a path to employment. In addition, it is clear that many theologians knew some canon and civil law, and thus studies of how legal faculties functioned cannot help but be useful to theological as well as to legal scholarship.