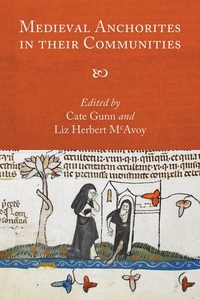 Those of us who study medieval religious culture, but who have stood outside the scholarly industry surrounding Julian of Norwich or the Ancrene Wisse, may think we know a lot about anchorites: they are solitaries, shut away from the rest of the community in order to devote themselves to God. Medieval Anchorites in Their Communities demonstrates how incomplete such assumptions are. In fact, as several of the contributors to this edited volume note, in physical terms, a medieval anchorite could not exist without a community for daily support (6). Much of the recent scholarship on anchorites has tended to focus on guidance texts. A few, such as Mari Hughes-Edwards' Reading Medieval Anchoritism (Cardiff, 2012), have emphasized the potential social role of anchorites who were physically shut away but who also had to be available for interactions with members of their local community (7). This collection starts from that assumption; according to the introduction by the editors Cate Gunn and Liz Herbert McEvoy, the essays examine the roles of anchorites - sometimes also referred to as "hermits" if they are free to roam around or "recluses" if enclosed - within different groups: religious communities, lay communities, and textual communities. The overall aim of Medieval Anchorites is to offer "a broad examination of anchorites' interactions with a whole range of different communities," and the essays are successful in meeting that goal.

A strength of the volume is the multi-disciplinary approach taken to the study of anchorites. Though the authors are certainly familiar with well-known medieval anchoritic guides like the Ancrene Wisse and the Wooing Group prayers (with essays addressing those works by Catherine Innes-Parker and Dorothy Kim) many combine those texts with a variety of other sources, such as architectural plans, churchwardens' records, bishops' registers, vernacular literature, late medieval testaments, and Books of Hours to demonstrate "the extent to which anchorites in fact played a central role within the devotional life of the community" (8).

An example of this cross-disciplinary approach is E. A. Jones' introductory essay, which shows how the physical spaces recluses and hermits occupied in medieval society - cells attached to castles, city walls, and fortifications, as well as in forests at the frontiers of medieval society - serve to mark them as liminal figures aiding in moments of transition or ritual processes. Jones is especially interested in the relationship of anchorites to court culture and notes how they are portrayed in relevant courtly literature, such as the hermit in the forest who aides Ywain the Knight's transition back to society or Richard II's maturation as a ruler after encountering an anchorite at Westminster Abbey during the Peasants' Revolt (33). Similarly, Cate Gunn begins with architectural plans to explore whether or not an unexplained attachment to the Colne Priory in Essex may have been an anchorite's cell, possibly for a widow identified through a signatory to a charter known as "Roberto filio recluse." Though Gunn determines that one cannot conclusively prove that the attachment was an anchorite cell, her exploration provides an excellent overview of the role of female anchorites in twelfth-century England.

An important insight that emerges from the volume is that anchorites could provide significant spiritual benefits to the lay community. For example, Michelle Sauer argues that there was a kind of economy of purgatorial services in the late Middle Ages. Wealthy patrons could afford to endow monasteries or chantries in order to ensure masses sung on their behalf to speed their way through purgatory. For the less wealthy, anchorites were an affordable source of intercessory prayer, established by contractual friendship in which the laity supported the anchorites in return for prayer. Sauer argues that purgatorial teaching was influential in "creating a sense of transgenerational relationships and fostering a whole new system of patronage and gift-dependent friendship networks" (103). Clarck Driestan sees evidence of a similar intercessory role for anchorites in the fifteenth-century text, A Revelation of Purgatory, which has previously been interpreted as an historical text recounting how a woman recluse aided in the release of a soul in purgatory through her prayers. Thanks to recently discovered excerpts from a lost Latin copy of the Revelation, he reinterprets it as a text that groups of religious women could customize for themselves and then circulate in order to present their institutions as possessing anchoritic intercessors and potentially attract benefactors who would participate in this spiritual economy (86).

More than most edited collections, Medieval Anchorites and Their Communities proves an accessible entryway into its topic, the role of hermits, anchorites, and the like in medieval society. Anyone interested in anchorites could pick up this volume and find something compelling or relevant. The book does have two small limitations. The first is that the volume is heavily dependent upon English sources and sites without ever actually noting this geographical focus in the introduction. Only three of the essays make much use of non-English examples, particularly Andrew Thornton's analysis of the Regula Solitariorum, composed in the early tenth century by Grimlaicus, a monk in a monastery near Metz. Thornton's reading of Grimlaicus' Rule reveals how an enclosed life might be a way for a monk to get a less busy form of cenobitic monasticism for himself within his own community (82).

The second limitation really stems from the lack of supporting sources in some cases; in the authors' quests to push their lines of inquiry to the fullest, they sometimes have to engage in speculation. This tendency is evident in Gunn's piece on the mysterious recluse in Essex and even more so in James Plumtree's exploration of the "geographical and historical context" surrounding the condemnation of a "false" hermit by the Bishop of Salisbury in 1352. According to the bishop's mandate addressed to the members of the cathedral and the college of St Edmund, a man in the village of Fisherton was accused of leading believers astray by wearing clerical garb, pretending to be a hermit, and extorting gold and silver from the people by "diabolical fraud." Scholars have seen the hermit as an example of abuse, but Plumtree speculates that, in the wake of the Black Death, he may instead have fulfilled a need in the community for religious services at a cheaper price than the orthodox clergy could provide (141). While Plumtree raises valid points about the shortage of clerics after 1349, his thesis is impossible to prove. He concludes that the incident can serve as "an indication of a particular type of solitary: the highly problematic" (143).

In short, Medieval Anchorites is a well-conceived and written work useful to scholars working on anchoritic texts as well as to anyone interested in medieval religion, especially in medieval England.