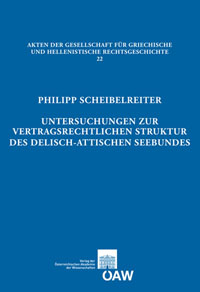 This book is a very clear exploration of the early structure of the Delian League, which later turned into what we call the Athenian empire. Its main aim is to reconstruct the exact wording of the initial legal agreement between the members of the League (9). As a result, the main chronological focus is relatively narrow: it is the events after the retreat of the Persians from mainland Greece in 479/8 and the foundation of the so-called Delian League in 478. However, the author pays due attention to the Delian League's immediate predecessor, the Hellenic League, as well as some interesting near-eastern imperial parallels. The work is clearly structured with a detailed discussion of the sources, and it will be a useful addition to existing scholarship. However, it was unclear to me which audience this book envisaged; I shall explain this issue, and the problems that stemmed from this, below.

The book is divided into four parts. The first part discusses the historical background of the foundation of the League; the second part, which is the heart of the book, explores the precise wording and possible clauses that would have formulated the original agreement between the League's members; the third part goes over more well-trodden ground, such as the constitution of the League and the question of membership, while the fourth and final part explores relatively briefly the later development of the League and its transformation, especially in relation to membership. I would highlight two aspects as important contributions to scholarship. The first, and possibly the most important contribution of this work, is to be found in pages 249-53, where the author proposes a reconstruction of the original text of the agreement between the League's members, based (mostly) on later epigraphic parallels. The second important contribution is the discussion of near-eastern parallels in relation to the friend-foe clause, found in Greek texts discussing international relations, and suggested here as a possible inclusion in the original treaty (chapter 4.3).

The book is clearly written, with a clear structure and a coherent argument. Yet, while this is a systematic survey of the chosen topic (the constitution of the Delian League in its initial stages), it has one major flaw, which makes it partly an unsuccessful scholarly work: that is its engagement with, and positioning in, current scholarly debates. The history of the Delian League has recently been going a radical transformation. Recent studies have focused on the language of imperialism (and especially the epigraphic language) [1], the importance of locality [2], the economic aspects of Athenian policy in relation to the League and the Aegean [3], the importance of the differentiation between formal and informal rule [4], and perhaps most importantly the recent re-dating of the most crucial sources with regards to the history of the League, the Athenian imperial epigraphic dossier. [5] At the same time, our understanding of what is the main source for the topic, Thucydides, has been enriched by new approaches highlighting the importance of narratology, intellectual context, and ethnic affiliations. [6] The work of Simon Hornblower is at the forefront of such scholarship. [7] It is even more surprising, therefore, that any reference to Hornblower's commentary (or indeed any other work by this prolific author) is absent from this volume. The author seems to ignore or perhaps be uninterested in such recent developments and decisive shifts in scholarly interest. His approach is a traditional narrative of gradual transformation, and in this he follows largely the traditional linear approach to the history of the League, which recently has attracted much critique. [8] As a result, his approach and main aim is a relatively old-fashioned one: it is to reconstruct the early history of the League, and its legal framework.

Yet, how does one write such a history? As the author himself admits, we have no contemporary sources. We are at the mercy of later sources, with their own agendas, contemporary contexts and biases: one cannot, for example, read Thucydides or Herodotus (or indeed any source) as a straightforward account of what happened in 478. The same is true with inscriptions. The author's use of later epigraphic parallels and much later literary sources in order to reconstruct the 'original' legal framework of the League creates a vicious circle. Why should we assume that the later epigraphic clauses in decrees are an unchanged continuation of the 'original' clauses? The fact that the (later) literary sources report similar clauses may be in fact a reflection of the current at that time use of language in treaties: in other words, Herodotus, or the source behind the Ath.Pol. is using the language that is used in his time, that of high empire. The language used in 478/7 is, in my opinion, almost impossible to know; this makes this book resemble an intellectual game in language construction with no basis on our sources. The use of later testimonia for the reconstruction of the official 'original' language of the League also assumes that the language of treaties remained unchanged during the fifth century, an assumption that is clearly problematic, as much of recent work has shown. The author is quick to admit the novelty of the Delian League as an institution - yet, such a new reality, alongside the existence of the first time in the Greek world of an important Greek imperial power, Athens, must have had a considerable impact on the nature of treaties and their language: the language, in other words, changed. [9]

This obvious lack of engagement with modern debates and their concerns over how the history of the League may be written creates another problem: that of audience. In other words, what is the primary audience of this book? Is this a book for fellow scholars (a scholarly monograph) or is this a book for students (a handbook)? It is clearly not a book addressed to a modern scholarly audience, as the engagement with debates is out of date and the approach overtly traditional. The extensive references to entries in the New Pauly, in lieu of references to scholarly works, seem to indicate that this is a work targeted to students, especially German students, who can more easily chase such references rather than references to articles in English or French journals. Yet, the style, the inclusion of (some) untranslated Greek passages and the detailed argument do not make this suitable for students either. I admit that I am at loss as to what is the primary target audience of the book.

There are certainly exciting new ways to engage with the history of the early League and its constitutional framework, such as stressing its oriental roots, its economic basis, and its geographic background, restrictions and advantages. But this book, despite its attention to detail and because of its traditional approach, is not one of them.

[5] This is linked with the famous three-barred sigma debate as a solid criterion for the dating of Athenian epigraphic documents. The old orthodoxy has now been overturned, and most scholars believe that Athenian inscriptions bearing the three-barred sigma do not necessarily belong to the period before 446. This has massive consequences for the dating of these documents. See Peter J. Rhodes: After the three-bar Sigma Controversy: The History of the Athenian Imperialism Reassessed, in: CQ 51 (2008), 500-6, and Nikolaos Papazarkadas: Epigraphy and the Athenian Empire: reshuffling the chronological cards, in: Interpreting the Athenian empire, ed. by John Ma / Nikolaos Papazarkadas / Robert Parker, London 2009, 67-88.