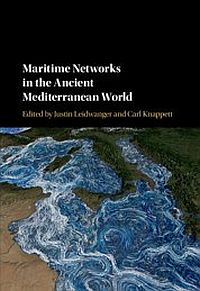 This edited volume is the result of a workshop organized by the editors in Toronto in 2013. It is a tightly-argued volume that considerably enriches current discussions about networks. The chronological span covered is large; indeed the ancient Mediterranean world in the title encompasses the Bronze Age Aegean and Byzantium in the 7th and 8th centuries CE. Each article has its own merits, but in addition to the individual arguments put forward, the volume as a whole is an excellent contribution to network methodology. The authors work with social network analysis' concepts such as small worlds, preferential attachment, and scaling. As a result, this will be essential reading for anyone who attempts to apply a Social Networks Analysis (SNA) approach to the humanities in general, and ancient history and archaeology in particular. The focus on maritime networks, furthermore, complements recent scholarly trends of exploring seascapes and maritime landscapes as a constructive feature of ancient societies and not simply as the backdrop for where 'history' takes place. For all those reasons, this is an excellent volume that is far more than its constitutive parts. I shall comment on the individual contributions below.

The first chapter, written by the two editors works as an introduction to the volume ('Maritime Networks, Connectivity, and Mobility in the Ancient Mediterranean'). It provides helpful summaries of each contribution and highlights recent developments in network theory and its application to the ancient Mediterranean. The emphasis here is on mobility and connections, established through maritime connectivity. Connectivity is understood here as the geographic potential and mobility the realization of this potential, which is socially construed. Deeply indebted to Braudel's Mediterranean and Horden and Purcell's Corrupting Sea, this chapter moves on the discussion by critically unpacking how differently prehistorians and historians (and classical archaeologists) approach the relationship between mobility and connectivity. The aim is to explore 'how ancient communities, viewed, experienced, and exploited maritime space for different social, economic, and political goals' (5). The authors stress the importance of crossing chronological boundaries between periods (but also disciplines and regions) and of operating in multiple maritime scales. The end result is a powerful testimony for the power of pushing the boundaries of our discipline and for the role that a network approach can play in re-imagining the history of the ancient Mediterranean.

Tim Evans provides the first study with his contribution entitled 'Robust Spatial Network Analysis'. This chapter may be read as a second introduction on how to use network analysis to perform modeling. Evans takes the reader slowly and clearly through all the steps of creating a model of interaction using spatial analysis. The main argument is that even when based on the same datasets, which, in the field of archaeology, may be reports about individual sites, the networks produced using different models may be considerably diverse. A robust spatial network analysis, then, involves the comparison between different models so that the most appropriate is then consolidated through comparison with other models of the same family. This is extremely useful, especially for readers such as myself, who are not comfortable with network programming. Furthermore, the emphasis on the many different connotations of distance (physical, determined by cost or accessibility etc.) is a useful reminder of how terminology may hide important implications of analysis, which needs to be spelled out.

Ray Rivers then turns his attention to a seminal event of the Greek Bronze Age, the eruption of the volcano on Thera ('New Approaches to the Theran Eruption'). He stresses that in the field of archaeology, datasets are inevitably less complete, and therefore archaeologists inevitably apply a 'pragmatic' approach, based on models that make very few assumptions. If we are restricted by the nature of our discipline to be able to distinguish between models, then, a good way to explore the usefulness of models would be their ability to describe evolution of networks in time. The case of the eruption of the Theran volcano is, subsequently, used as an example exactly of this approach. The author examines four different models of interaction in order to check whether they can accommodate the change brought with the removal of Thera as an important node of exchange in the Late Bronze Age Aegean as a result of the volcano. The models that support our understanding of the archaeological record are those which take into account the cost-benefit of networks (obvious costs of sustaining the population and maintaining the network and the benefits of resources and exchange), and which permit re-arrangement of the nodes.

Thomas Tartaron ('Geography Matters. Defining Maritime Small Worlds of the Aegean Bronze Age') uses social network analysis models to understand the maritime networks of the Aegean Bronze Age, at all scales, and embracing as many actors as possible. This is an ambitious aim, which is performed admirably. The aim is to underline the difference between the kind of networks and material that prehistorians use and the concerns that permeate SNA more generally, as it developed from the field of sociology. This is an important reminder: that SNA does not necessarily fit well with the kinds of interactions we see in prehistory, especially for local-scale maritime networks, such as those examined here. The emphasis on the micro-scale of local interaction is another important reminder. The author is absolutely right in that for most Myceneans, local interaction (cabotage) was probably more important for their existence and created denser networks of communication than long distance interaction. The question, again, is one of evidence, or, rather, comparative lack of evidence for local maritime connectivity. What emerges is a careful and convincing analysis of the maritime 'small world' of the Saronic gulf. This is an important contribution, which highlights the centrality of coastal life in any network modelling.

Barbara Kowalzig's contribution ('Cults, Cabotage, and Connectivity. Experimenting with Religious and Economic Networks in the Greco-Roman Mediterranean') does not fit as well as the other contributions in this volume. One reason for this is the source material itself. The author examines some classical literary texts (such as Euripides' Iphigeneia in Tauris, Iphigeneia at Aulis, Aeschylus' Agamemnon) in order to explore how maritime networks had religious and economic dimensions. The author adopts a long historical perspective, discussing evidence from the late Mycenean period to the classical period, especially in relation to the Euboean Gulf. But such an analysis assumes that maritime interaction had certain diachronic elements that did not depend on historical contingency; in other words, an analysis of networks in general without placing them in specific chronological (and therefore social, economic, political, cultural, religious etc.) contexts can become dangerously a-historical. This contribution becomes stronger when the author turns her attention to the literary evidence provided by tragedy in relation to the cult network of Artemis-Iphigeneia in the southern Euboean gulf. However, the careful examination of the texts here reveals, I think, more about the contemporary Athenian tragic re-iterations of cultic associations, and less about actual ritual networks operating locally in the region at the time. The kind of maritime connectivity projected here is not one grounded on the material evidence, but rather one envisaged by a particular community (Athens) through the medium of drama. In that sense, the use and application of network analysis and terminology allows the author to ask some interesting questions, but ultimately the source material chosen cannot provide suitable answers.

Elizabeth S. Greene problematizes the evidence of shipwrecks as indications of trade routes ('Shipwrecks as Indices of Archaic Mediterranean Trade Networks'). Through a careful examination of a number of shipwrecks (eg. Pointe Lequin IA, Pabuç Burnu etc.), the author stresses the importance of larger ports serving as hubs, and the concept of 'middle ground' as ways to overcome the difficulties of conceptualizing networks on the basis of shipwrecks. Sometimes dots on the map, as it is clearly argued here, represent larger zones of regional interaction, with long-term and ongoing relationships. One solution is to envisage the shipwreck as a self-contained 'ego network', that is, understanding the wreck as a community itself with external ties and links that create a regional or super-regional network, based on different types of evidence recovered from the wreck itself, such as cargo, galley wares, ship's equipment etc. At a second level, shipwreck networks can be based on a combination of the findspot of the shipwreck and the communities or regions with which shipboard items can be associate. The resulting networks reveal interesting links and distribution patterns, which can be understood as a series of overlapping zones of interaction. I consider this article a highlight of the volume; the application of network theory in addition to a brilliant contextualization of how shipwrecks should be understood and contextualized created a powerful argument that considerably enhances our understanding of exchange and interaction in the archaic Mediterranean.

Mark Lawall and Shawn Graham turn their attention to amphoras, and specifically the methodological problems embedded in using amphoras, stamped and unstamped, as evidence for networks ('Netlogo Simulations and the Use of Transport Amphoras in Antiquity'). By exploring the impact of different variables in models, they are able to unravel some important features of ancient networks of exchange and consumption. The model simulations are very speculative, but at the same time rewarding; when the models' results resemble important features of the archaeological record, it is valid to ask whether the specific conditions used in the model might have applied in antiquity (eg. Small world, preferential attachment etc.). This is a very rich and thought-provoking contribution.

A similar approach is adopted by Tom Brughmans in his contribution ('Lessons Learned from the Uninfomative Use of Network Science Techniques. An Exploratory Analysis of Tableware Distribution in the Roman Eastern Mediterranean'). The aim here is to discuss the usefulness of the methodological application of network techniques to understand maritime connectivity, using the distribution of ceramic tableware as an example. By focusing on the limitations of network analysis, as well as on the advantages, this article promotes caution, which is a very useful reminder for our field.

Paul Arthur, Marco Leo Imperiale, and Giuseppe Muci turn their attention to Byzantine networks of exchange ('Amphoras, Networks, and Byzantine Maritime Trade'). The focus here is the distribution of the globular amphora, a specific shape that dominated the Byzantine world in the 8th century. While the authors stress that the distribution of globular amphoras does not necessary reflect an imposed form of movement of goods, nonetheless, their predominance in Byzantine controlled areas does seem to imply a Byzantine-controlled exchange system.

The final contribution by Barbara Mills can be read as a conclusion to the volume ('Navigating Mediterranean Archaeology's Maritime Networks'). She successfully brings out the overarching themes of the contributions and questions to what degree maritime networks are different from terrestrial networks. Indeed, the networks envisaged in this volume include maritime and terrestrial connections; perhaps a strict dichotomy between the two is not always useful. The themes highlighted here are the applicability of network theory and thinking in the field of archaeology (a 'Third Science Revolution', perhaps?), the usefulness and applicability of simulation modelling, and the importance of scale. The author closes with three ways of taking this forward: the impact of technological innovations on network dynamics, the creation of heterogeneous social spaces, and an examination of networks of memory and maritime knowledge transmission, and the role of religious ritual in that process.