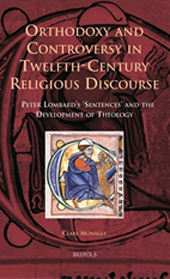 When the Fourth Lateran Council set out its vision for Christian ideology and practice in 1215, it mentioned two theologians, Joachim of Fiore and Peter Lombard, by name, and affirmed the orthodoxy of the latter's Trinitarian position: "We therefore condemn and reprove that small book or treatise which abbot Joachim published against master Peter Lombard concerning the unity of or essence of the Trinity" (143). Thus, this most emblematic of reforming councils emphatically acknowledged that its canons rose out of controversy. Although Lateran IV certainly channeled most of the significant intellectual and spiritual trends of the previous century, there was nothing inevitable about the decisions it made about doctrine, and given that the Lombard's Sentences became the standard theological textbook of the medieval schools, it is easy to forget that its first readers vigorously rejected some of its ideas.

In her highly readable and instructive survey of the pre-history, composition, and reception of the Sentences, Clare Monagle traces the process by which controversy gave way to orthodoxy. Peter Lombard's ideas triumphed, she argues, because his method was so useful to the reforming papacy and the ordained, literate clergy who implemented its program. "By 1215, the method offered by the schoolmen had become integral to the operations of power and authority." (xviii) The acceptance of the Sentences was not inevitable but must be read as "a complicated tale of the way in which ides are transformed through use and context" (86). Focusing especially on Christological and Trinitarian issues, Monagle traces theological disputes from the late eleventh century through Lateran IV to demonstrate that, despite the clear contours of orthodoxy outlined by Lateran IV, disputation itself became essential to clerical life. This approach helps to complement that of scholars like R. I. Moore, who saw the twelfth century as transformative because of the rising influence of school-trained clerics in European culture and politics.

Monagle begins by examining the most notorious intellectual controversies of the late eleventh and early twelfth centuries: those surrounding Berengar of Tours, Roscelin of Compiègne, Peter Abelard, and Gilbert of Poitiers. Although such paragons of orthodoxy as Anselm of Canterbury and Bernard of Clairvaux railed against the positions of these thinkers, ultimately, these disputes had the effect of incorporating new ways of thinking about theology into contemporary discourse. Berengar and Roscelin in particular looked at new ways of approaching the language through which theological truths could be approached, and in so doing severed the link between words and the realities they stood for. When Gilbert's critics, including Bernard, failed to secure his condemnation, it was a sign that contemporaries were willing to allow that the tools of grammar could be applied to theological problems. For Monagle, the key debate was not simply over the Eucharist, Trinitarianism, or Christology, but over the methodological assumptions of the schoolmen, and this debate provides the most relevant context for the reception of the Sentences.

Drawing on previous scholarship, most notably that of Marcia Colish and Philipp Rosemann, Monagle introduces Peter's work and argues that it is neither as conservative nor as boring as such scholars as C. Stephen Jaeger and the late R. W. Southern have claimed. Instead, she sees the Sentences as an innovative and optimistic work that adapted the methods of the Victorines and the compilers of the Glossa ordinaria to the needs of a student of theology. Peter managed to free theology from the structure imposed on it by the works of scripture through his "eschewing of the biblical text altogether as a structuring device" (54). Instead, he organized his work according to the arguments dear to schoolmen, "to survey them as things to be utilized, and to systematize the path by which they might lead to the enjoyment of the divine" (64).

Having established the origins of the Lombard's method, Monagle surveys his Christology and responses to it. In this account he is a cautious theologian, trying to lay out a program that could help scholars avoid error while using the tools of language to understand orthodoxy. Christ's nature required careful consideration, and Peter surveyed three theories: homo assumptus, subsistence, and habitus. Although Monagle finds that he probably privileged the second view, that "Christ would be understood to have begun to be subsistent from two natures" (81), she is most interested in the methodological implications of his discussion. What really mattered for the long-term acceptance of his Sentences was that he acknowledged the distinction between "what may be signified by a thing's name and what the thing itself might be" (83). Thus, when he asked whether Christ's humanity was an aliquid, a "something", he was not sliding into heresy but exposing "the failure of theological terminology to manage adequately the hypostasis" (85-86). However, by delving into the problems associated with using language to discuss mystery, he provided ammunition to his critics.

These critics, in Monagle's reading, saw Peter Lombard as one of a long tradition of heretical thinkers going back to Berengar, thinkers who challenged papal authority and Christian unity itself. The stakes were high. For Gerhard of Reichersberg, Peter's purported sundering of Christ's human and divine natures was a metaphor for a divided Church. While previous scholars have tended to see early critics of the Sentences as willfully misinformed, Monagle argues that the book set off a crucial debate about the role of the schools in Christendom that reached its climax in the 1170s. In subsequent years, however, some scholars, most notably Peter Comestor, saw the Sentences as providing a bold new way of thinking about theology. Others still, like Peter the Chanter and Stephen Langton, steered clear of squabbles about finer points of doctrine in order to focus on practical theology. But even as they feared some of the implications of the Lombard's thought, they saw in his method a means of helping to draw the boundaries of thought and behavior.

As a result, the canons of the Fourth Lateran Council were promulgated by products of the schools like Innocent III who understood the value of Peter Lombard's notional categories for discussing theological truths. By endorsing Peter's position that "there exists a certain one supreme reality [una quaedam summa res]" (143) but denying pace Joachim of Fiore that this created a quaternity along with the three persons themselves, these ecclesiastical leaders acknowledged the role his method could play in laying out the boundaries of Christian theology. For Monagle, this shows that "the endorsement of 1215 [...] has a compelling logic within the overall frame of the ambitions and scope of Lateran IV" (165). Specifically, the council sought not only to delineate theology and sacramental practice but assert the papacy's role in constructing boundaries. Peter Lombard's thought helped them do this.

Monagle's book introduces its subject clearly and advances its argument persuasively. Graduate students will find it to be an excellent survey of twelfth-century Christology that softens the chronological and institutional contours of early scholastic disputes. Her twelfth century stretches out as a series of uncertain debates rather than as a teleological march to Lateran IV, and she helps put to rest facile distinctions between the intellectual programs of monks and schoolmen. I would only quibble that her argument about the increasing role of clerici seems to be made most persuasively at the beginning and end of the work, and disappears somewhat in the intervening survey of theology. Given that the clerici were guardians of the sacraments, perhaps more attention to sacramental theology would have been helpful. That said, the economy with which the book makes its argument is a great strength, and thus one must hesitate to ask for more content. Through her account of the vicissitudes of the Sentences in the late twelfth century, Clare Monagle has made a compelling case for the interaction between the work of the schools and ecclesiastical legislation.