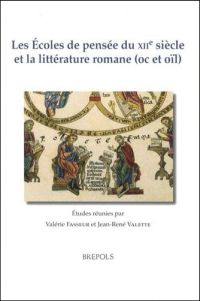 When Charles Homer Haskins presented the evidence for a "Renaissance of the Twelfth Century" to a mainstream scholarly audience in 1927, he relied primarily on Latin sources, but he acknowledged that the high medieval achievement was situated in a rich and varied social and intellectual context. Subsequent scholars confirmed that vernacular literature played a part in this "renaissance," while noting that its development in aristocratic courts was accompanied by serious social tensions. These tensions centered around a series of dichotomies - clerical vs lay-aristocratic, Latin vs vernacular, scholastic vs monastic, urban vs rural - that have continued to inform scholarship on the period, and have presented additional questions, including the central question posed by the volume under review here: to what extent did the intellectual production of the twelfth century "schools" (in both their institution and figurative senses) penetrate into the romance literature in Old French and Occitania (langue d'oc and langue d'oïl)?

The editors and contributors carefully discuss the methodological conundrums involved in tracing the diffusion of the ideas of the schools into the vernacular languages. As Valerie Fasseur and Jean-René Valette write in their introduction, this inquiry lies "entre intentio auctoris et coïncidence due à 'l'air du temps'" (18). Did authors deliberately deploy scholastic learning when writing vernacular works, or did they merely participate in an ill-defined diffusion of equally ill-defined ideas (often modern constructs themselves)? The overarching questions of the volume concern the very structure of thought across institutions and languages during the long twelfth century. After a programmatic introduction by the editors, the volume proceeds with nineteen essays divided into three broad sections and concludes with an afterword.

The first section, "Éléments d'historiographie," offers four possible examples of the diffusion of thought from écoles (particularly those associated with Paris, Chartres, and Laon) to vernacular romance. In the opening piece co-editor Valérie Fasseur looks for evidence of a scholastic influence on what she calls "savoir de sud," centered on the troubadours. She sees the relationship between north and south less as one influence than one of rivalry. Certainly some troubadours were influenced by the thought of the north, for example by its dialectical methods, but they transformed this "savoir" into a different kind of "school," one that may well have been consciously opposed to those of Paris. Francine Mora-Lebrun revisits the historiographical problem of the "School of Chartres," by tracing Chartrian echoes in the narrative poems known as the Romances of Antiquity. Although she admits that direct lines of influence can be difficult to find, she finds enough footprints of William of Conches and others to claim that Chartres played "un rôle important, voire décisif, dans la mise en place de certaines pratiques d'écriture en langue romane" (61). Taking a similar interpretive approach, Alain Corbellari asks whether the complexities of Abelard's ethics, particularly as they related to sin and love, could have reverberated in the account of adultery in Béroul's Tristan. Admitting that the argument is somewhat speculative, Corbellari finds it plausible that Abelard provided a framework within which Béroul could have approached adulterous love. The other co-editor, Jean-René Valette concludes the first section with a careful and methodical study of Cistercian, Victorine, and Franciscan spirituality and Grail literature (which he has previously termed "pensée du Graal"). The proliferation of schools, with their different concerns, muddies any attempt to discuss the intellectual trajectories of their ideas. Following up on ideas he introduced in the introduction to the volume, Vallette argues that Grail writings offer a kind of lay utopia, and the round table represented a kind of textual community of its own (95). In much the same way that Fasseur found the troubadours to have created a rival school of their own in opposition to the Latin-ecclesiastical world, Valette suggests that the Grail stories allowed for an "annexion du discourse clerical afin de légitimer l'édifice charnel que représente l'aristocratie laïque" (89).

The second large section of the work turns to the problem of epistemology, in which some of the authors invoke Foucauldian notions of episteme and discourse to reject simplistic accounts of ideas cascading down from scholars and theologians to courtly authors. Cédric Giraud dissects the very concept of the "school", focusing on Laon, and questions its heuristic value. After all, scholars were mobile, and they had often idiosyncratic modes of expression. Moreover, magisterial authority itself radiated in various forms (official organs like chanceries, for instance, diffused acta but not scholarship). This all militates against the very notion of a stable and coherent school of Laon, which itself may have been a creation of admiring Cistercians. In "Saint Bernard et les Laïcs," Jacques Verger argues for a subtle kind of cultural diffusion. Since it is difficult to find direct echoes of Cistercian thought in vernacular literature, Verger poses a different question: what does Bernard of Clairvaux's way of writing to aristocrats reveal about commonalities between the lay and monastic thought-worlds? Although again the conclusions are speculative, he finds that despite the emphatically biblical style of his letters to laymen, by using a common ethical language drawn from (for instance) Roman imperial values, Bernard reinforced the values of a "univers essentiellement aristocratique" (117).

Two very interesting pieces treat the Victorines. First, Jean-Yves Tilliette asks whether there was a Victorine literary aesthetic. The Victorines were sensitive to the beauty of the universe and that of scripture, and the rhetoric that theologians deployed in the service of exegesis was thus both useful and beautiful. The quadrivium, moreover, gives its students access to the voice of God, while the classic rules of rhetoric could help analyze prayer. While Tilliette jokes that he did not fulfill his contract, this sense of the interaction of form, rhetoric, and content provides a model for how discourses could emerge from diverse backgrounds, and thus is generally speaking relevant to the theme of the volume. Similarly, Dominique Poirel finds echoes of secular values in the writings of Hugh of St Victor, even suggesting the possibility of "un éthique courtoise dans le De institutione novitiorum. Hugh effectively opened up the "clerical citadel" to others, and considering this could help scholars see a less bifurcated ethical world in twelfth-century France.

In a piece that stays very close to the main theme of the volume, Jean-Marie Fritz examines "conjointures troyennes" through the Latin "Historia scholastica" of Peter Comestor, the romances of Chrétien de Troyes, and the Genèse poem of Évrat. Evrat, after all, saw his work as a process of enromancier. But more than an example of cultural diffusion from Latin to the vernacular, the piece is a reflection on an epistemic transformation that depended on notions of orality as well as the translation of the written word: "La mise en roman est en même temps une mise en voix, une oralisation. Et ce public élargi et laïc paradoxalement une surenchère scolastique" (209).

The third part of the volume includes seven case studies that largely bear out an important point of the introduction, namely that the most instructive way of considering the schools and romance literature is by studying the articulation and re-articulation of lay-aristocratic values in the romances. This is accomplished subtly and persuasively by Élénore Andrieu, who discusses how apostolic perfection, as it related to "good poverty and good wealth" helped create "une perfection éthique, mais spécifiquement laïque, voire seigneuriale" (269). Francine Mora-Lebrun and Michel Zink discuss manuscript insertions, the former looking at how Chartrian ideas were approached by scribes copying the Roman d'Eneas and the latter closely reading three sermons of Maurice de Sully (Bishop of Paris from 1160 to 1196) that found their way into a manuscript of the Lancelot-Grail cycle, where they appear between the suite de Merlin and the Queste del saint Graal. Carefully employing Foucauldian notions of discourse, Zink explores how received images like the mirror, so important to Cistercians like Bernard of Clairvaux, informed the lay spirituality of Guillaume de Lorris's portion of the Roman de la Rose. A similar comparison informs Damien Bouquet's study of the use of Ciceronian ideas of friendship in Aelred of Rievaulx and Jean de Meun. The final essay, "Influence possible d'Alain de Lille sur la littérature française des XIVe et XVe siècles," returns to more straightforward questions of influence and suggests that Alain's writings, possibly because of his use of allegory and his Platonism, helped shape the polemical writings of Alain Chartier in the early fifteenth century.

In a short afterword, Patrick Henriet explores some past scholarship about the secularization of theological themes, taking as his starting point C. S. Lewis's Allegory of Love. Turning to the contributions considered here, Henriet concedes that they demonstrate no clear continuities between the twelfth-century schools and vernacular romance, but argues that they do show certain borrowings of earlier ideas. Borrowings, however, are less important than considering the discursive possibilities of the scholastic and vernacular texts under consideration. While it may seem a bit like the authors engage in speculation and ultimately hedge their bets, in fact the overarching argument that lay-aristocratic culture fashioned itself as a kind of mirror for the aesthetics and ethics of the schools is made quite powerfully.

The authors have differing ideas about the trajectory of twelfth-century thought and literature, yet all reject the notion that scholastic ideas entered the vernacular world simply by sliding down a linguistic and institutional hierarchy. In addition, the variety of approaches here makes the book quite valuable for scholars with a more narrow methodological focus. Some of the contributors here are at home talking about Foucault and discourse, others read manuscripts closely. Most important, readers who specialize primarily in one of the two cultural spheres referred to in the title will find their perspective greatly expanded by the collection.