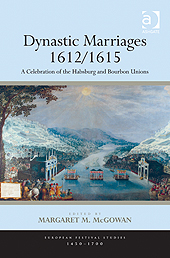 Margaret M. McGowan has put together a collection of essays that will be of interest to scholars both as an innovative close focus on an overlooked event - the festivities surrounding the engagement (1612) and subsequent double wedding (1615) between the French and Spanish royal families - and as a gathering together of the collected wisdom of some of the leading emeritus names in the field. Professors such as McGowan, John Elliott, Paulette Choné and Ronnie Mulryne may have retired, but their work continues to inspire, and is joined here by scholars in earlier phases of their careers, from important leaders of academic institutions in France and Britain to younger scholars. The well edited volume is also useful in bringing together a variety of specialisms, from political history to the history of art, music and dance. My only disappointment in the overall coverage for this collection is the relative imbalance of scholars focusing on the Spanish half of the topic. John Elliott's introductory essay on the political context of the marriages is quite general (especially when compared to the parallel chapter that follows by Nicolas Le Roux, reflecting the very latest scholarship in this topic), while David Sánchez Cano stands nearly alone.

The reason for this is partly discussed by Sánchez Cano, however, in his main theme: the Spanish simply did not celebrate these events with the same magnificence as the French, for either political or fiscal reasons. This thematic imbalance between France and Spain is also addressed somewhat by the inclusion of two chapters that focus on other European festivals staged in alignment with or reaction to the celebrations in France. Maria Inès Aliverti discusses the celebrations in Naples and other Italian cities, while Paulette Choné writes about the reactions to the Habsburg-Bourbon alliance by the Stuart and Wittelsbach courts in London and Heidelberg, with a wedding alliance of their own in 1613. One of the significant points regarding the Spanish and Italian reticence is that emotions were dampened in 1612 due to the recent death of Queen Margarita, though this does not really explain why there was a similar lack of exuberance in 1615. Aliverti draws together religious, political and dynastic identities in her analysis of Italian festivals in this period, demonstrating that some cities felt close to the deceased queen purely dynastically (Florence, where the Queen was the Grand Duchess's sister), or due to her piety (Milan), or to political duty (Naples), or indeed to both (Rome). This encapsulates well the sense that in the early seventeenth century politics, religion, dynasticism and ceremonial display were closely intertwined in a manner sometimes difficult for modern readers to perceive. This is highlighted effectively by Nicolas Le Roux who points out that the ultra-Catholic duke of Guise, in his efforts to support the Queen Mother Marie de Médicis, ironically became an ally of the Protestants at court.

Marie de Médicis herself is the focus of much of the rest of this volume. As regent of France from 1610, it fell to her to negotiate the treaty of friendship with the Habsburgs of Spain, manifested in the exchange of two princesses: Elisabeth of France to marry Felipe of Spain (the future Philip IV), and Ana of Spain to marry Louis XIII. Much of the discussion about the Queen Mother focuses on her Italian background, her reasons for planning such extravagant festivals in 1612 and 1615, and her place in historical memory. All of these areas are examined through the lens of the festivals choreographed by Marie, and the subsequent published materials. Several of the chapters focus on the most celebrated event of the marriage festivities: the carrousel of 1612, with its equestrian ballet. The chapter by Marie Baudière analyses the genre of the festival book, which is actually in this instance rather insignificant compared to Italian and German publications. She argues that this is because the French court did not need to impress quite as much as the second-tier dynasties such as the Gonzagas, Medicis, Guelphs or Wittelsbachs. Monique Chatenet and Patrice Franchet d'Espèrey contribute pieces focusing on specific aspects of the carrousel. Both stress the importance of detail, not just to the court insiders who could "read" the symbolism of the outfits worn by the knights and their manoeuvres on horseback, but also to the wider public (notably the City of Paris), and to noblemen in general, who, impressed by a display of the most important of noble virtues, restraint and self-control, would lend their support to the regime. To this is added another chapter by Paulette Choné focusing on the chivalric devises employed by the knights which solidifies the previous notion with specific examples.

The chapter by Iain Fenlon then shifts the focus to the ballet de cour danced by Princess Elisabeth before her departure for Spain in 1615. His chapter, on the music and dance elements of the festivities, is a bit out of synch with the others in this volume, mostly relying on outdated material, and missing the point made by others in their various contributions that these events were less about international prestige, and more about controlling the nobility at home. This idea is enhanced in the chapter by Marie-Claude Canova-Green, who focuses on the celebrations staged in Bordeaux for Louis XIII and Anne returning from the border with Spain. She stresses the "ambivalence" of images presented of peace and stability, necessary to deflect the very real threat of civil war led by dissidents such as the Prince of Condé. Instead, she argues that the symbolism suggests not equity and friendship with Spain, but superiority and imperial dominance. Here is a place in particular where it would have been quite useful to have a contribution on the Spanish reaction to such vaulted (even if only symbolic) claims.

Finally, the chapters by Margaret M. McGowan and Chantal Grell bring us to the topic of literary traditions and historical memory. It becomes clear that a major influence on the design of both the carrousel of 1612 and the ballet de cour of 1615 was the chivalric novel or "romance" popular in France the early seventeenth century, but also coloured by poetic works from Italy. McGowan stresses this again in her Epilogue: the projects of Marie de Médicis reflect both her Italian origins and her commitment to French forms like the ballet de cour. The festivities she staged were celebrated in literary works immediately following the events, and from the 1620s during the engagement of Princess Henriette-Marie to King Charles I of England, and as late as the 1660s, as a model for royal ceremony and a display of "good governance", signalled by international peace and domestic stability. All was not rosy, however, as Grell's chapter reminds us. History has not been kind to Marie de Médicis, and this marriage arrangement did not help much, despite the hype and published propaganda. The French associated the marriage and the expensive fêtes with xenophobic anti-Spanish (and anti-Catholic) feeling, and misogynistic dislike of regencies (for both Marie and Anne of Austria), and their inherent weakness that led to noble rebellion and the Frondes. Several times in this volume there are references to published attacks or satires of the festival events of 1612 and 1615; it would have been useful to have a chapter that focused more on these specifically.

An additional chapter by J. R. Mulryne is quite useful in pointing out the human and personal dimensions of much of these otherwise allegorical festivals, and once again turns attention to influences from outside France or Spain, notably the celebrated marriage of Grand Duke Ferdinand of Tuscany to Christine of Lorraine in 1589, and the Florentine influences on the court of the young Prince Henry Stuart before his death in 1612. This chapter might have been better placed at the very start as it gives useful background context. Mulryne makes astute assessments about the reasoning behind both Ferdinand and Henry's festival projects, in that they were driven by dynastic interests: Ferdinand linking to the Habsburgs to reinforce the reputation of the Medici after his brother's scandalous marriage to his mistress, and Henry's similar desire to link himself with the Medici to de-stress the perceived cultural impotence of his father's court. But I would add a further twist to both of these ideas in suggesting the importance of the House of Lorraine in linking the dynasties together. Christine of Lorraine should not be seen as just a "French" princess, but as a princess of a sovereign house that maintained a balance of dynastic links between the Valois and the Habsburgs (most recently via the bride's other grandmother and namesake, Christina of Denmark) - thus helping to unravel the query Mulryne poses of why Ferdinand would praise the Habsburgs in this supposedly pro-French marriage alliance: he was hedging his bets. Similarly, Henry's interest in the Tuscans can be explained in part because the Stuarts at this time had very few royal relatives, and the house of Lorraine (via his great-grandmother, Marie de Guise) was one of the most well-connected.

Overall, this volume is an exciting addition to the growing number of studies dedicated to the genre of royal ceremonial. Recent works for comparison include the collections of essays on French and European entrées edited by Nicolas Russell and Hélène Visentin (2007), and by Marie-Claude Canova-Green, Jean Andrews and Marie France-Wagner (2013), not to mention the volumes already in progress following conferences and workshops commemorating the 1613 anniversary of the Stuart-Palatine wedding in Heidelberg.